How Germany’s Far-Right coup plot is linked to Russia 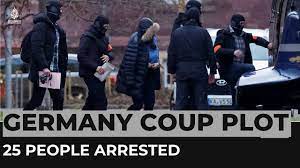 Despite Moscow denying it has links to far-right terror groups in Germany, following the arrests of 25 people suspected of plotting to overthrow its government, there is a Russian dimension to the extraordinary case.

More than 3,000 police carried out dawn raids in Germany on Wednesday, arresting 25 people suspected of being members of a network led by 71-year-old aristocrat referred to as Prince Heinrich XIII.

Authorities say the plotters planned to make him leader of a new government. He is accused of contacting Russian representatives in both Russia and Germany in the hope of winning support for his plot.

The group subscribes to conspiracy theories “consisting of narratives of the so-called Reichsbürger and QAnon ideologies,” according to a media statement from the German prosecutors office.

The Reichsbürger movement rejects the legitimacy of the modern German state and insists it should exist according to its borders in place before World War II.

The group, whose plot began no later than November 2021, is “firmly convinced that Germany is currently governed by members of a so-called ‘deep state,'” prosecutors said.

The group believes that this liberation promises the intervention from the “alliance” which consists of a “secret society of governments, intelligence services and militaries of different states” that include Russia, as well as the U.S.

It planned to form an interim military government to negotiate the new state order in Germany and “the main contact for these negotiations is currently the Russian Federation.”

German prosecutors also said that among those arrested was one Russian woman, whose name was only given as Vitalia B, in keeping with Germany’s strict privacy laws.

She was detained on suspicion of facilitating attempts to make contact between a terrorist cell and Russian officials, although there were “no indications” that this had succeeded.

Jakob Guhl, senior manager in policy and research at the Institute for Strategic Dialogue (ISD), a London-based think tank that researches extremism, told Newsweek that the more traditional extreme right in Germany, such as neo-Nazis and the Identitarian movement, are split on their support for Russia.

“But among conspiracy theory adherents (such as) Reichsbürger and QAnon, they are very pro-Russia so it is not that strange that these people specifically who are part of this group would have sympathy (for Moscow),” he said.

A former member of the German parliament was also among the group. Birgit Malsack-Winkemann was a parliamentary deputy for the far-right Alternative für Deutschland (AfD) until 2021.

Guhl said that there are wings within the AfD that support Vladimir Putin “as a strong Christian traditional ruler who is standing up to liberalism,” although opinion within the party towards his invasion of Ukraine is divided. The AfD’s co-leaders, Tino Chrupalla and Alice Weidel, have condemned the reported plot.

Kremlin spokesman Dmitry Peskov said the arrests were “an internal problem of Germany,” adding that they have stated that “there can be no discussion of any kind of Russian intervention.”

Meanwhile, the Russian embassy in Berlin denied maintaining links to far-right terror groups in Germany in a statement that was carried by Russian news agencies.

When contacted for comment, a spokesperson for the German prosecutor’s office referred Newsweek to its statement on Wednesday, adding that “we cannot provide you with further information.”