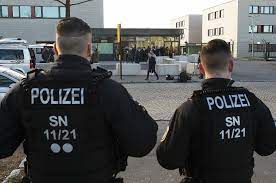 German police launched nationwide raids on Wednesday (December 7) and made 25 arrests against members of a far-right “terror group” suspected of planning an attack on parliament, federal prosecutors said.
Share:

The far-right coup plotters had mapped out their own government, with people chosen for cabinet-like roles if they succeeded in overthrowing Germany’s elected leaders. That’s among the revelations shared by German officials on Wednesday in an update on what they say was a conspiracy foiled by a massive anti-terrorism operation.

At least 25 people are under arrest, including 22 suspected members of a “terrorist organization,” Public Prosecutor General Peter Frank said in a brief news conference.

The conspiracy’s goal, Frank said, was to overturn “the existing state order in Germany based on democracy, using violence, and to replace it with their own state,” according to a translation by Deutsche Welle.

As details emerge about the alleged coup, here’s what we know so far.

The people arrested embraced a fantasy based on conspiracy theories and were united by a hatred of democracy, Interior Minister Nancy Fraeser said.

Officials say the suspects include members of several far-right extremist groups and QAnon followers, and people who adhere to the Reichsbürger or “Reich citizens” movement, which holds that Germany’s current constitution is invalid.

The group of conspiracists coalesced as early as November 2021, Frank said, uniting over their support for “Prince Heinrich XIII” — a 71-year-old man who has gained followers through his controversial political views. He is a minor aristocrat and member of the former German royal house of Reuss — which once included an actual Prince Heinrich XIII. But the monarchy was abolished when the Weimar Republic was founded in 1918.

Heinrich is among those who have been detained, Frank said. Others arrested include a Russian national, identified as “Vitalia B.,” who is accused of supporting the plan, according to a news release from the federal prosecutor’s office.

The group rejected Germany’s existing government as being tainted by “deep state” operatives, according to the prosecutor’s office, referring to a conspiracy view that has found adherents in several countries, including the U.S.

Organizers started forming a leadership council and adopted a structure seeking to mirror a federal government, Frank said. Members had been named to operate as the new justice minister and in other roles, with Heinrich tapped to be the future head of state, according to the prosecutor’s office.

The group also has a military wing, Frank said, stating that their plan includes the creation of a new military.

“In the past, some of the members of this military arm were active serving members of the German armed forces,” he said.

Arrests and raids were carried out across Germany

Federal, state and other police officers carried out 130 searches in a coordinated action spanning 11 states, Frank said. He confirmed that some 3,000 officers were involved in the raids.

The prosecutor’s office says two arrests were made on foreign soil: one in Perugia, Italy, and one in Kitzbühel, Austria.

Describing the group’s recent activities, the prosecutor’s office alleges that in October, representatives of the conspiracy’s military arm scouted existing military barracks in the states of Hesse, Baden-Württemberg and Bavaria as possible locations to house their own troops. And in November, the office says, members sought to recruit police officers in northern Germany to their cause.

Germany’s far-right has been growing for years

For Germany, the high-profile confrontation with its far-right easily eclipses an incident from 2017, when two German army officers were arrested and accused of plotting to assassinate the country’s justice minister and a former president, along with other attacks.

After that elaborate plot was uncovered, the defense ministry launched a wide-ranging probe to root out far-right extremism in the military. Then-German Defense Minister Ursula von der Leyen also urged senior officers to act when they see overt signs of far-right views.

That effort also included more comprehensive background checks for all new recruits — a step that was initially intended to block Islamist extremists from joining the military but was retooled to identify neo-Nazis.