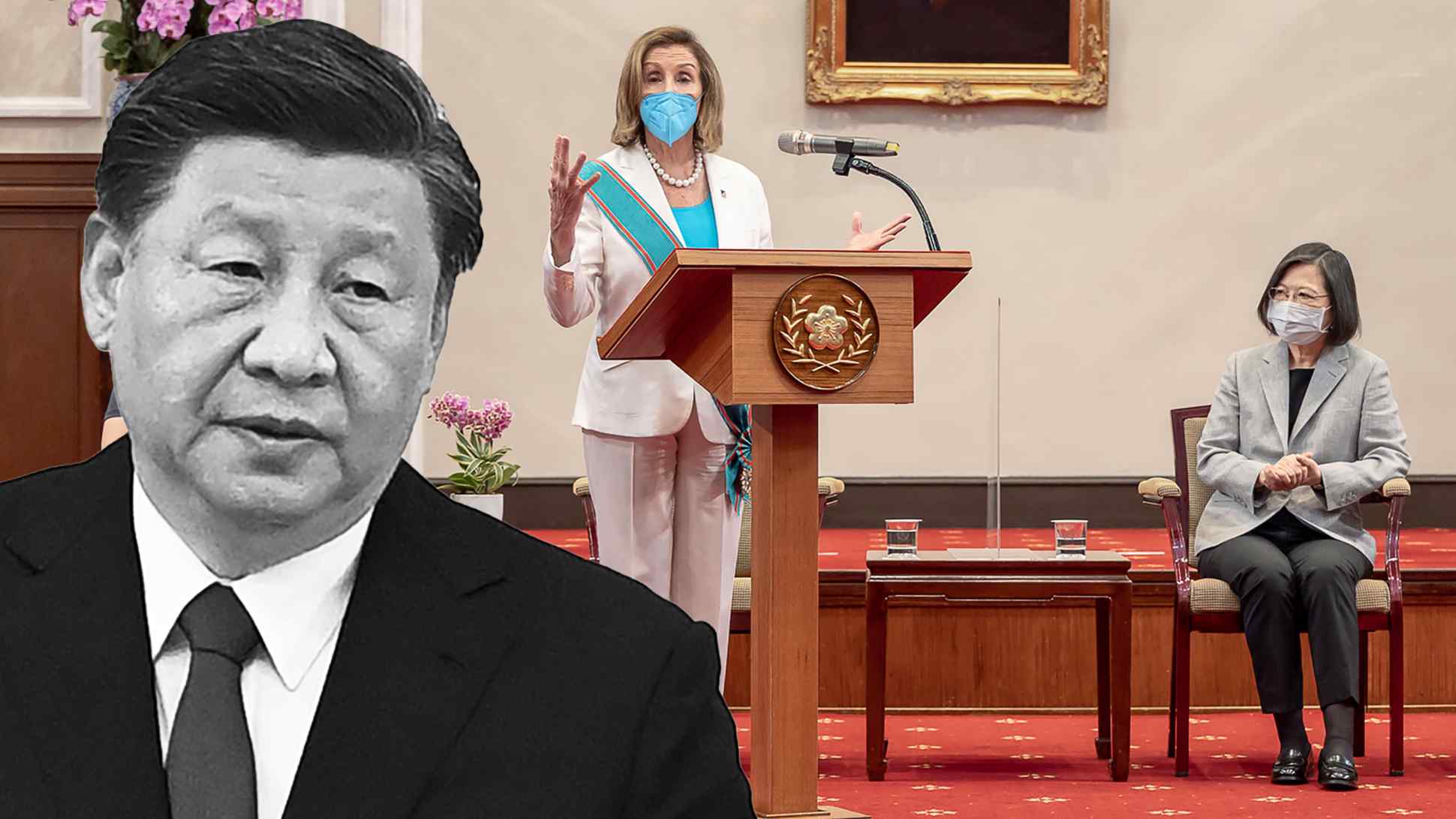 Xi Jinping might maintain the countermeasures he took after Nancy Pelosi (C) met with Tsai Ing-wen( R) in Taipei to deter other international dignitaries from making similar trips. XI is under pressure to prove he can manage U.S. relations like predecessors One analysts said Pelosi’s Taiwan visit is Xi’s final exam to stay top leader (Source photos by AP)
Share:

It’s not everyday you get to make history, defend democracy, and defy China in one fell swoop. But that’s exactly what Speaker of the House Nancy Pelosi managed to do with her recent visit to Taiwan.

Speaker Pelosi visited Taiwan amidst a whirlwind of military threats from China as well as criticism from her own party. After a tense call between President Biden and Chinese leader Xi Jinping, the White House urged Pelosi to back down and not travel to Taiwan, which the Chinese Communist Party views not as a sovereign nation but as part of China itself.

Not only was President Biden not supportive of Pelosi’s trip, but China’s President Xi Jinping told the U.S. president that “whoever plays with fire will get burned,” while the Foreign Ministry warned that the People’s Liberation Army would not sit by “idly” if Pelosi visited.

Taiwan was the Pelosi delegation’s third stop on a tour of Asia that also includes stops in Singapore, Malaysia, South Korea and Japan. But visiting Taiwan drew China’s anger because they view her visit to Taiwan as supporting the island’s pro-democracy forces.

In addition to irking world leaders, Pelosi also had the media in such a dramatic frenzy over her visit you would think the Speaker was jetting off with no idea how high-level international diplomacy works. A New York Times Op-Ed columnist, Thomas Friedman, took it upon himself to explain all the high-stakes at risk.

“I have a lot of respect for House Speaker Nancy Pelosi,” Friedman writes in his column this week. “But if she does go ahead with a visit to Taiwan this week, against President Biden’s wishes, she will be doing something that is utterly reckless, dangerous and irresponsible.”

Friedman goes on to warn Pelosi that due to her visit, the first to Taiwan by a House Speaker in twenty five years, “a lot of bad things could happen.”

Well, Speaker Pelosi didn’t let President Biden, Xi Jinping, or Thomas Friedman stop her. The highest-ranking woman in American government didn’t let threats from China or mansplaining from Friedman stop her mission to stand up for Taiwan, among the brightest beacons of democracy in the region.

After all, the stakes of Pelosi not caving were higher than the stakes of her going. Between America’s botched withdrawal from Afghanistan and the collective failure to exert any control over Russia in Ukraine, Taiwan’s struggle for democracy could be the key foreign policy issue that allows America to regain its international image as the defender of global democracy.

So why all the fuss? The Speaker pointed out that trips to the region by lawmakers like Senators Bob Menendez (D-NJ) and Lindsey Graham (R-SC) earlier this year did not cause nearly as much controversy as her trip has. “They made a big fuss because I’m the Speaker, I guess,” Pelosi said at an event with Taiwan President, Tsai Ing-wen. “I don’t know if that was a reason or an excuse because they didn’t say anything when the men came.”

Pelosi also took the time to applaud historic female leadership, pointing out that her meeting with Tsai was a moment to take “pride in women’s leadership” and noting that both politicians had smashed the glass ceilings in their respective governments.

In addition to sending the message to the world and region that the U.S. won’t be taking military, economic, or political orders from China, perhaps Pelosi’s controversial trip demonstrated that standing up for democracy may be a woman’s job after all.

ANUSHAY HOSSAIN  is a writer and a feminist policy analyst focusing on women’s health legislation. She is a regular on-air guest at CNN, MSNBC, and PBS, and her writing on politics, gender, and race has been published in Forbes, CNN, USA TODAY, The Daily Beast, and more. Hossain is also the host of the Spilling Chai podcast and author of “The Pain Gap: How Sexism and Racism in Healthcare Kill Women.”