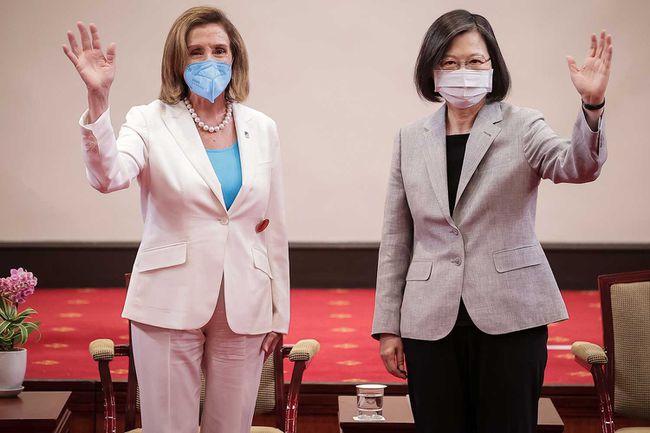 Unfazed by China’s warnings of retaliation US House Speaker Nancy Pelosi visited Taiwan and met with Taiwan’s President Tsai Ing-wen Wednesday as part of her defiant visit to the island that China claims as part of its territory.
Share:

“Those who play with fire will perish by it,” the Chinese Foreign Ministry stated Tuesday after Pelosi arrived in Taipei.

Nancy Pelosi met with Taiwan’s President Tsai Ing-wen Wednesday as part of her defiant visit to the island that China claims as part of its territory.

China’s strong objection to the House speaker’s trip, which made her the highest-ranking U.S. official to visit Taiwan in a quarter century, came with warnings and ignited concerns among the American military as well as inside President Joe Biden‘s White House.

“We have repeatedly made clear our firm opposition to Speaker Pelosi’s potential visit to Taiwan. If the U.S. side insists on making the visit and challenges China’s red line, it will be met with resolute countermeasures,” China’s Foreign Ministry spokesperson Zhao Lijiang said last week. “The U.S. must assume full responsibility for any serious consequence arising thereof.”

China’s Ministry of National Defense added last week that Pelosi should cancel the trip or the country’s military will “resolutely defend national sovereignty.”

Undeterred, Pelosi touched down in Taipei late Tuesday and was welcomed by Taiwanese leaders.

“Today the world faces a choice between democracy and autocracy,” Pelosi said Wednesday during a meeting with President Tsai. “America’s determination to preserve democracy, here in Taiwan and around the world, remains ironclad.”

She also dismissed China’s tough comments about her visit as possibly an “excuse” for their bluster.

“It’s important to note that members of Congress, several of them had made trips just earlier this year,” Pelosi said, according to video published by CNN. “They made a big fuss because I’m Speaker, I guess — I don’t know if that’s a reason or an excuse because they didn’t say anything when the men came.”

One of the men she referred to is Republican Sen. Tommy Tuberville, who told Newsmax earlier this week that he made the trip “5, 6 months ago” with “three or four other senators” despite similar warnings from China.

During the visit, President Tsai presented Pelosi with Taiwan’s highest civilian honor, the Order of the Propitious Clouds.Nancy Pelosi Visits Ukraine, Receives Medal from President Zelenskyy: ‘There for You Until the Fight Is Done’

“Speaker Pelosi is truly one of Taiwan’s most devoted friends,” Tsai said during a ceremony after Pelosi addressed Taiwan’s parliament, NBC News reports. “We are truly grateful to you for making this visit to Taiwan to showcase the U.S. Congress’s staunch support for Taiwan.”

China, as expected, condemned Pelosi’s trip, which she made with five other House Democratic lawmakers: Reps. Gregory Meeks of New York, Mark Takano of California, who also led a delegation to Taiwan last year, Suzan DelBene of Washington, Raja Krishnamoorthi of Illinois and Andy Kim of New Jersey.

“Those who play with fire will perish by it,” the Chinese Foreign Ministry said in a statement Tuesday after Pelosi arrived in Taipei.

In an op-ed published by The Washington Post, Pelosi wrote that her visit “in no way contradicts the long-standing one-China policy,” noting that hers is “one of several congressional delegations to the island.”