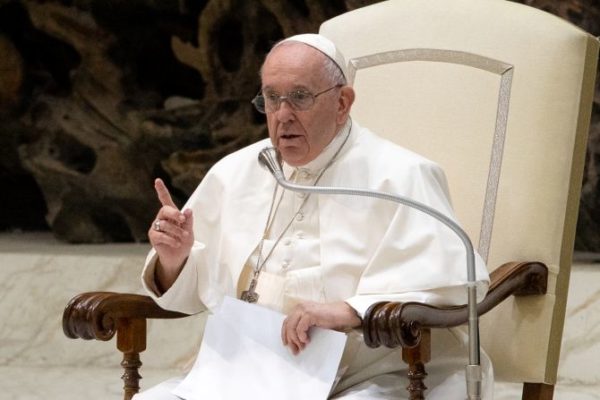 Vatican – Pope Francis prayed Wednesday for “justice and truth” in Lebanon ahead of the second anniversary of the deadly Beirut port explosion.

“My thoughts are with the families of the victims of that disastrous event and with the dear Lebanese people,” the pope said on Aug. 3.

“I pray that each one may be consoled by faith and comforted by justice and truth, which can never be hidden.”

Speaking at the end of his general audience in Paul VI Hall, Pope Francis expressed hope that Lebanon will experience “a rebirth.” The Middle Eastern country has grappled with a devastating financial crisis and a lack of stable governance in recent years.

“I hope that Lebanon, with the help of the international community, will continue on the path of ‘rebirth,’ remaining faithful to its vocation of being a land of peace and pluralism, where communities of different religions can live in fraternity,” Pope Francis said.

Lebanon will mark the anniversary of the Beirut port explosion with a National Day of Mourning on Aug. 4. The Maronite patriarch, Cardinal Bechara Boutros Rai, is also expected to offer a memorial Mass for the victims.

The blast killed 218 people and wounded 7,000. The World Bank has said that the explosion caused more than $3.8 billion in material damage in the capital city, destroying homes, schools, churches, and medical facilities.

Two years after the devastating explosion, many Lebanese people feel frustrated that they “still do not know the truth” about what happened, according to a priest in Lebanon.

“The memory of the event is causing so much suffering, coming on top of the country’s severe economic crisis, the worst in its history, and general distrust towards politicians,” Father Michel Abboud, the president of Caritas Lebanon, told Asia News.

“The Lebanese people are accustomed to wars and suffering, but today trust between people has been lost and only faith in God seems to have remained,” he said.

Pope Francis prayed for Lebanon at his first Wednesday general audience since June 22. Much of the audience was dedicated to a reflection on his week-long visit to Canada, which he said marked “a new page” in the relationship between the Catholic Church and indigenous peoples.