Iraqi protesters voice anger : “We have nothing” 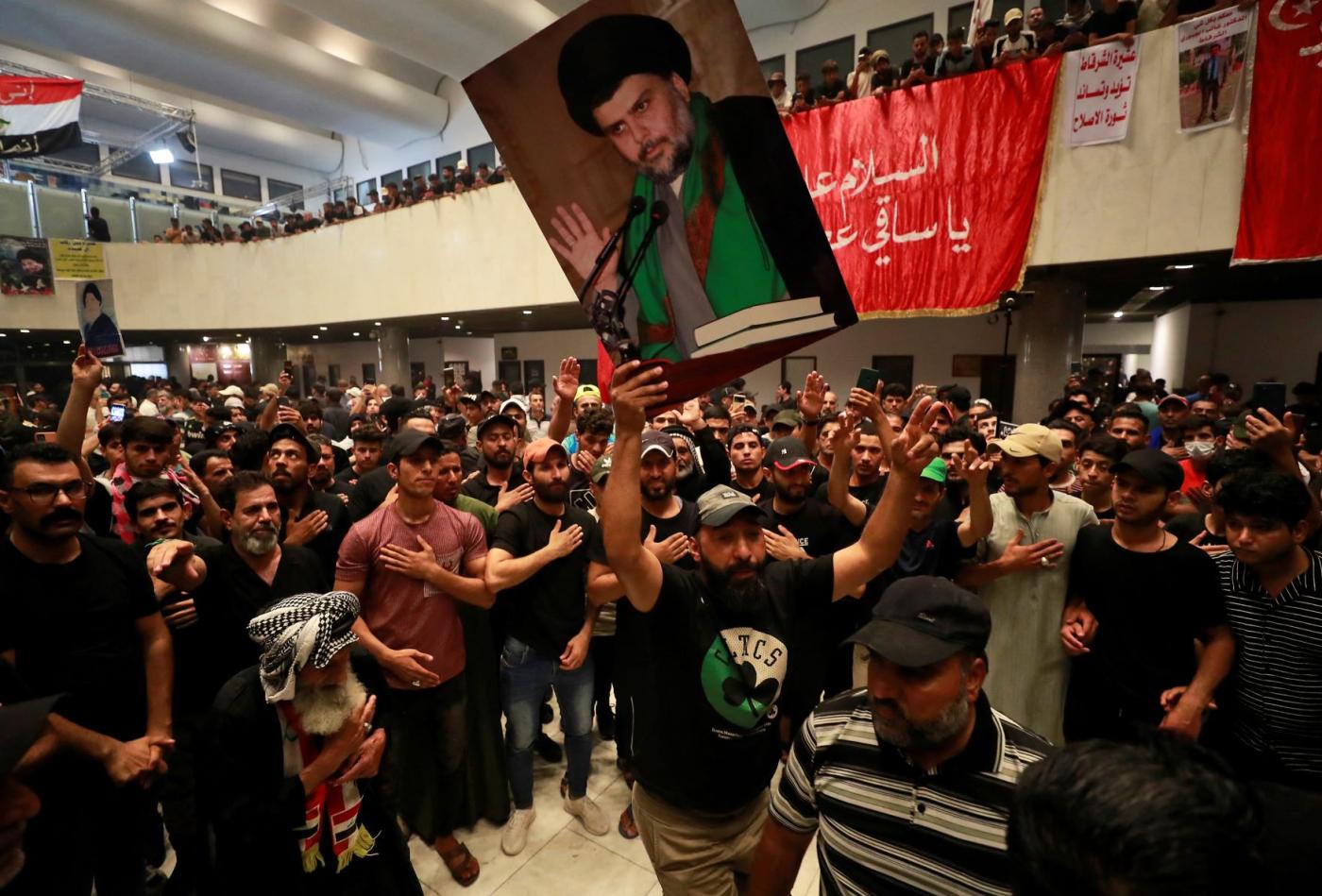 Thousands of Iraqi protesters have occupied the parliament in Baghdad’s Green Zone for the past five days, the latest political turmoil to strike the war-scarred country.

The mass sit-in is led by followers of powerful Shiite Muslim preacher and political kingmaker Moqtada Sadr, who is facing off against a rival, Iran-backed Shiite faction called the Coordination Framework.

The at times carnival-like protests have seen demonstrators repeat the Sadrist rhetoric but also express anger at a dysfunctional political system, poor public services and the weak economy of the oil-rich but corruption-plagued country.

Nearly two decades after a US-led invasion toppled Saddam Hussein, and 10 months on from the latest elections, the impasse has left Iraq without a new prime minister or president.

AFP spoke to four of the demonstrators, several of whom did not want to be fully identified, about why they have joined the mass protest camp.

Ali Mohammed Oklah, 43, left behind his wife and three children to drive for four hours from Iraq’s mostly Shiite south to the legislature in the usually ultra-secure Green Zone government district.

“I’m rebelling to free my country from the fangs of the corrupt,” said the Islamic studies high school teacher, who also wants Iraq to adopt a new constitution and a presidential system.

He spoke proudly of his movement — “we the Sadrists” — and its previous breaches of the Green Zone, prime minister’s office and legislative chamber.

“I’ve joined them all and I’m proud of it,” he said, stressing the “revolutionary ideology” of the camp around firebrand cleric Sadr who once led an anti-US militia and who has millions of devoted followers.

Oklah acknowledged “the difficulty of the struggle for reform” in Iraq.

But he stressed his conviction that Sadr enjoys “divine protection” and commands a “loyal popular base, which is like the arm with which he strikes at the dens of the corrupt”.

Leaning back in a chair inside the legislative chamber, Umm Ali, 47, has come to demonstrate with her husband, brothers and nephews.

She vowed they would stay “until the Sayyed tells us to withdraw,” using the honorary title of Sadr, whose black turban marks him as a descendant of the Prophet Mohammed.

A portrait of Moqtada sat in the lap of the mother of six girls and one boy.

“He is the only one with integrity,” said the woman, who lives in Baghdad’s working-class Sadr City district, named after the preacher’s late father who was a revered cleric.

Her goal, she said, is to “recover the country. The whole country has been stolen.”

She said her husband has been disabled since he was wounded in a 2009 bombing in Baghdad.

“He was a civil servant, he was just getting out of work,” she said. “Since then we have received no compensation.”

She said her son started working after primary school to help feed the family.

“There is no work for young people,” she said. “Even those with higher degrees become porters or day labourers. Is this what they deserve?”

He charges only about 30 US cents for the tuk-tuk ride and says “it’s symbolic, just for the petrol”.

On a normal day his tuk-tuk earns him just over $10, just enough to scrape by with his wife and their one-year-old daughter.

Life is a struggle he said, with daily power cuts, potholed streets and a night-time tuk-tuk ban that makes his job harder.

Pointing to other young protesters, he said: “All these young people don’t have jobs. We want jobs.”

Achour said he would be ready for any job, even with the military: “Let them give me a job and send me anywhere, even to the border with Syria.”

Computer engineer Mustafa, 29, who studies French in his spare time, said he doesn’t belong to the Sadrist camp but came to protest anyway.

His primary allegiance is with the broad anti-government protest movement that exploded onto Iraq’s streets in late 2019 but petered out amid a bloody crackdown and the Covid pandemic.

Mustafa recalled that Sadrists had also rallied back then: “Half of the demonstrators were Sadr supporters, they had their tents and his portraits.”

Now he has come daily to the parliament protest, hoping it will “change the reality” of Iraq.

He vented his anger at the ruling class he blames for Iraq’s many unresolved woes.

“They have millions and billions, they have air conditioning, houses, villas abroad,” he said. “And we have nothing at all.”