Optimistic over clinching a maritime border deal, US envoy heads to Israel 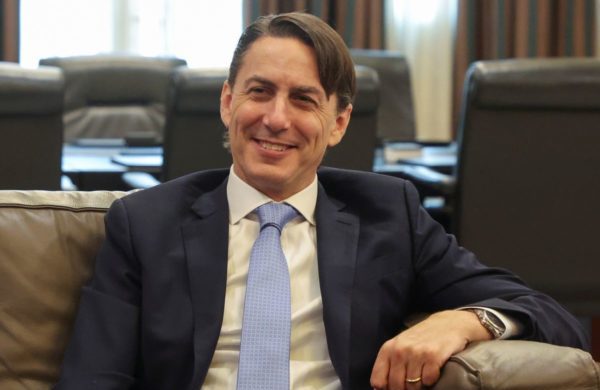 Optimistic over clinching a maritime border deal following his discussions with the 3 top Lebanese leaders , U.S. mediator Amos Hochstein decided to head to Israel to work out the final details
Share:

The U.S. mediator Amos Hochstein decided to head to Israel following his meeting at the Baabda palace with the top Lebanese leaders after the negotiations got very specific over the demarcation line . Israel reportedly will not accept any Lebanese demand south of Line 23 and Lebanon reportedly told him it would not then accept any demand from Israel north of Line 23

It appears from the discussion Hochstein had in Baabda and Israel that both countries decided in Lebanon’s proposed line 23 as the maritime border demarcation line, but at the same time they both want guarantees that no one will cross the line in either direction

Here are some specific details about the Baabda meeting

“Hochstein told the conferees, ‘the Qana field is certainly fully yours, but Israel is saying that if you want to go to Naqoura, it will not accept any Lebanese demand south of Line 23,’” senior sources told al-Jadeed TV.

“The Lebanese response was that Lebanon would not then accept any demand from Israel north of Line 23 and anything less than this line,” the sources added.

“Hochstein decided to quickly go to Israel after he heard the same remarks from the 3 top leaders who told him ‘if you will take a long time to deliver an answer, you have to allow TotalEnergies to immediately begin (gas) exploration in our Lebanese blocks( primarily block 9 which has been disputed between Israel and Lebanon ) the same as Israel has done. If TotalEnergies is not allowed to explore, it will not be easy for us to allow Israel to continue its drilling and extraction works in the Karish field ,’” the sources said.

The EPAs were awarded as part of the 1st offshore licensing round, launched by the Lebanese government in 2017, to the consortium led by France’s TotalEnergies acting as operator (40%) and composed of Italy’s ENI (40%) and Russia’s Novatek (20%) as partners.

Both Blocks are located in water depths ranging from 1,400 to 1,800 meters knowing that Block 4 is central while Block 9 is in the southern part of the country.

As per an international tender, Tungsten Explorer drillship, owned by the company Vantage Drilling, was contracted to start the drilling activity in Block 4. The drillship reached Lebanese waters on 25 February 2020. Drilling of the first exploration well on Block 4 in the Exclusive Economic Zone of Lebanon was completed on 26 April, 2020, TotalEnergies reported that traces of gas were observed confirming the presence of a hydrocarbon system, but no reservoirs were encountered.

Because block 9 was a disputed territory TotalEnergies decided to postpone the drilling activity till after the dispute is resolved.

According to al-Jadeed, Lebanon also demanded a guarantee that TotalEnergies would be allowed to immediately start exploration in block 9 after signing the agreement in Naqoura, prompting Hochstein to reportedly respond: “What if we don’t agree? Can you give me a guarantee that Israel won’t come under any attack?”
“The unified Lebanese response was, ‘No, we can’t , if negotiations take months, we cannot give you guarantees, but if the issue is settled within days or a week, there will be a different response of course, while allowing us to begin exploration,” al-Jadeed added.

Russia’s Sputnik news agency meanwhile reported that Lebanon rejected an Israeli proposal calling for giving up a part of block 8 north of Line 23 in return for Israel giving up the Qana gas field.

“Lebanon clung to the Qana field and refused to give up any square inch in block 8,” the agency quoted a Lebanese diplomatic source as saying.