US envoy meets several officials, as Lebanon distances itself from Hezbollah 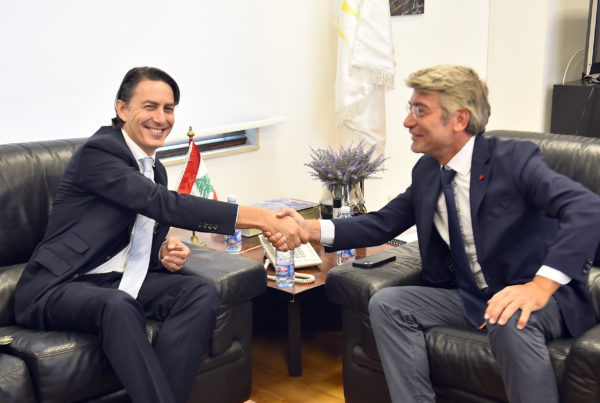 US energy envoy Amos Hochstein has landed in Beirut and is shown holding talks with Lebanon’s Energy Minister Walid Fayyad in the presence of US ambassador to Lebanon Dorothy Shea ( not shown) Speaking after the meeting, Fayyad said Hochstein is “carrying a new proposal to the Lebanese officials.” “He told me that it is positive and denied all rumors about joint (gas) extraction between Lebanon and Israel,” Fayyad added. He also said “Hochstein told me that he will negotiate with the World Bank over the conditions for endorsing the electricity plan that Lebanon has devised
Share:

Beirut – US envoy Amos Hochstein arrived in Beirut Sunday with the aim of resolving a bitter maritime border dispute between Lebanon and Israel over Mediterranean waters with offshore gas fields.

“Reaching a resolution is both necessary and possible, but can only be done through negotiations and diplomacy,” the US State Department said in a statement ahead of Hochstein’s visit.

Washington’s envoy for global infrastructure and investment is “facilitating negotiations between Lebanon and Israel on the maritime boundary”, the statement added.

The maritime border dispute between Lebanon and Israel escalated in early June, after Israel moved a production vessel to the Karish offshore field, which is partly claimed by Lebanon.

The move prompted Beirut to call for the resumption of US-mediated negotiations on the demarcation dispute.

Lebanon and Israel have no diplomatic relations and are separated by a UN-patrolled border.

Lebanon distances itself from Hezbollah

The Iran backed Hezbollah militant group on Sunday aired drone footage of Israeli ships in a disputed Karish gas field in the Mediterranean Sea, highlighting the tension at the center of U.S.-mediated maritime border talks between Lebanon and Israel.

Commenting on Hezbollah’s action Lebanon caretaker Foreign minister Abdullah Bou Habib confirmed that “the video published by Hezbollah on the coordinates of the gas extraction platforms does not represent the position of the Lebanese state.”

He stressed that there is no problem with the resistance, but the decision on demarcation will be made by the Lebanese government.

He also stressed in the interview with Al-Jadeed TV that the most important meetings of the American mediator with regards to the maritime border demarcation issue , will be with President Michel Aoun, Parliament Speaker Nabih Berri, and Caretaker Prime Minister Najib Mikati. The Lebanese position is very clear and it calls for ” returning to negotiations in Naqoura”, Aoun, Berri and Mikati are all in agreement on this he added .