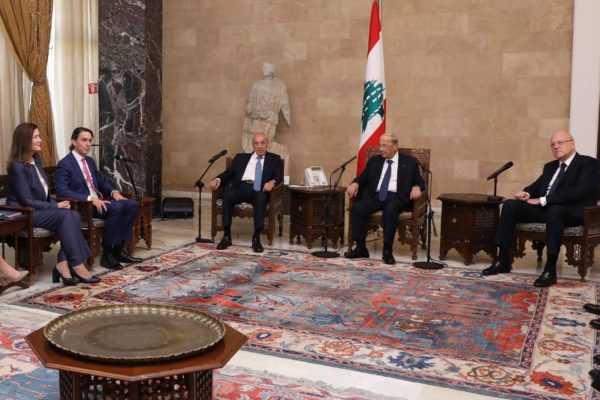 Top Lebanese leaders ( from Right caretaker PM Najib Mikati, president Michel Aoun and Speaker Nabih Berri ) are shown meeting at the Baabda palace with US envoy Amos Hochstein( 2nd from Left) and the US ambassador to Lebanon Dorothy Shea ( L) . All expressed optimism after the meeting with regards to the maritime border demarcation with Israel photo courtesy Dalati and Nohra
Share:

BEIRUT- The U.S. official mediating a maritime border dispute between Lebanon and Israel said on Monday he remained optimistic about making progress towards a deal and looked forward to returning to the region to make a “final arrangement”.

Amos Hochstein made the comments after meeting Lebanon’s top leaders at the presidential palace, as he presses efforts to clinch a rare agreement between enemy states that should allow both to develop offshore energy resources.

“I remain optimistic that we can make continuous progress as we have over the last several weeks and I look forward to being able to come back to the region to make the final arrangement,” Hochtein said.

Prime Minister Najib Mikati gave a thumbs up as he emerged from the meeting that also included President Michel Aoun and Parliament Speaker Nabih Berri.

“The atmosphere was positive. Everyone came out of the meeting satisfied and, God willing, over the next few weeks we will begin to see results,” he told journalists after the meeting.

Lebanese officials have not said what, if anything, Hochstein proposed during the meeting.

A senior Israeli official, speaking to Reuters on condition of anonymity on Sunday, said Hochstein would present a new Israeli proposal that “includes a solution that would allow the Lebanese to develop the gas reserves in the disputed area while preserving Israel’s commercial rights”.

This would entail “some drilling there” by the Lebanese, the Israeli official said without elaborating.

The United States in 2020 stepped up long-running efforts to mediate an agreement between Israel and Lebanon in indirect talks.

Tensions over the issue escalated in June when a ship arrived in an area deemed by Lebanon to be part of the disputed zone to begin developing a field for Israel.

Israel said the area in question – Karish – was firmly in its exclusive economic zone.

The heavily armed Lebanese group Hezbollah – which is backed by Iran and has fought numerous conflicts with Israel – has threatened military action if Lebanon is prevented from exploiting what it deems to be its offshore rights.

But it has also said it will respect the decision of the Lebanese government.

Lebanon and Israel are located in the Levant Basin, where a number of big sub-sea gas fields have been discovered since 2009. Israel already produces and exports gas.

But while Israel has moved ahead, Lebanese hopes of producing energy have been hamstrung by political paralysis.