Ageing pope admits he must slow down, or retire 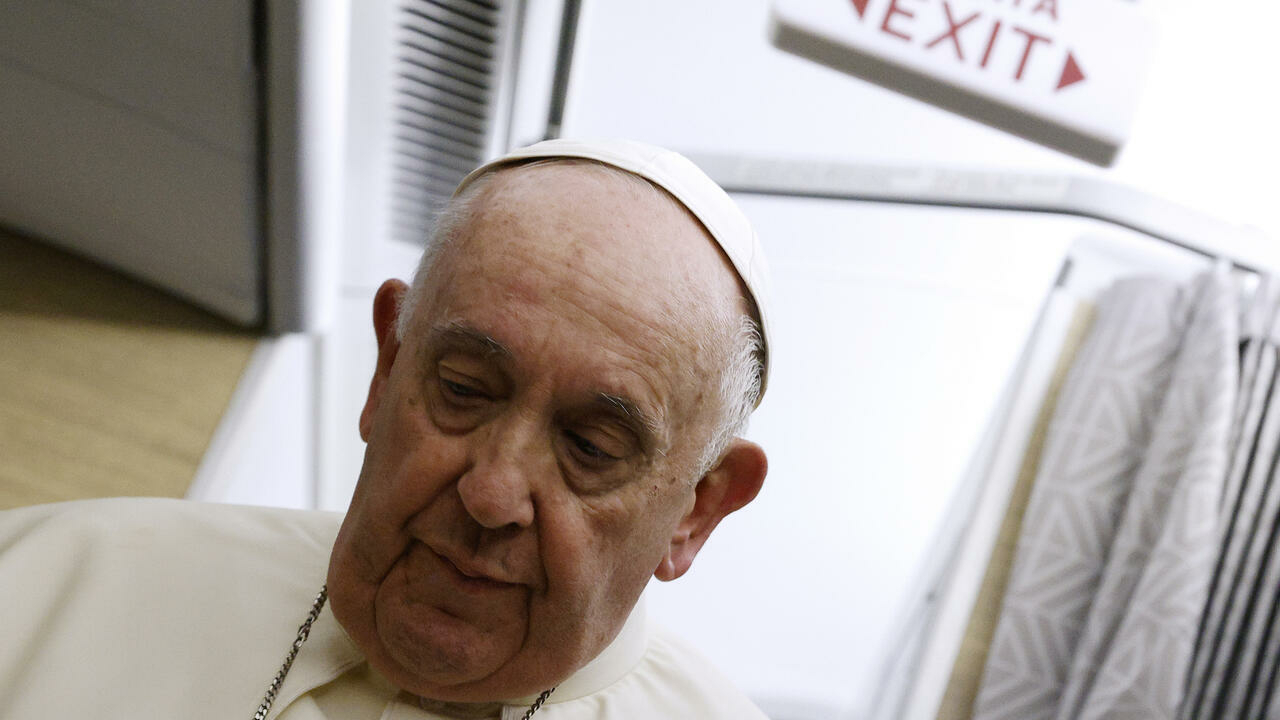 Pope Francis , 85 holds a news conference aboard the papal plane on his flight back after visiting Canada, July 29, 2022. REUTERS/Guglielmo Mangiapane/Pool.He admitted he needs to slow down, telling reporters after a six-day trip to Canada that he cannot maintain his pace of international travel — and may have to think about retiring.
Share:

Aboard the Papal Plane – Pope Francis admitted Saturday he needs to slow down, telling reporters after a six-day trip to Canada that he cannot maintain his pace of international travel — and may have to think about retiring.

“I don’t think I can go at the same pace as I used to travel,” said the 85-year-old pope, who suffers pain in his knee that has seen him increasingly reliant on a wheelchair.

“I think that at my age and with this limitation, I have to save myself a little bit to be able to serve the Church. Or, alternatively, to think about the possibility of stepping aside.”

It is not the first time Francis has raised the possibility of following the example set by his predecessor, Benedict XVI, who quit over his own failing health in 2013, and is now living quietly in Vatican City.

In 2014, a year into his papacy, Francis told reporters that if his health got in the way of his functions as pope, he would consider stepping down.

In May, as reported in the Italian media, Francis joked about his knee during a closed-door meeting with bishops, saying: “Rather than operate, I’ll resign.”

“The door is open, it’s one of the normal options, but up until now I haven’t knocked on this door,” he said Saturday.

“But that doesn’t mean the day after tomorrow I don’t start thinking, right? But right now I honestly don’t.

“Also this trip was a little bit the test. It is true that you cannot make trips in this state, you have to maybe change the style a little bit, decrease, pay off the debts of the trips you still have to make, rearrange.

“But the Lord will tell. The door is open, that is true.”

The comments come after intense speculation about Francis’s future, after he was forced to cancel a string of events due to his knee pain including a trip to Africa planned for earlier this month.#photo1

Talk was also fuelled by his decision to call an extraordinary consistory for August 27, a slow summer month at the Vatican, to create 21 new cardinals — 16 of whom will be under the age of 80, thereby eligible to elect his successor in a future conclave.

Benedict’s decision to quit caused shockwaves through the Catholic Church. He was first pope to resign since the Middle Ages, but the precedent has now been set.

He mostly used a wheelchair during his trip to Canada, where he offered a historic apology for decades of abuse of Indigenous children at residential schools run by the Catholic Church.

But he did stand up in his “popemobile” to greet crowds.

Francis said surgery on his knee was not an option, adding that he was still feeling the effects of six hours spent under anaesthetic last summer, when he underwent an operation on his colon.

“You don’t play, you don’t mess around, with anaesthesia,” he said.

But he added: “I will try to continue to go on trips and be close to people, because I think it is a way of service, closeness.”

Francis still hopes to reschedule his postponed trip to South Sudan and the Democratic Republic of Congo.

“But it will be next year, because of the rainy season — let’s see: I have all the good will, but let’s see what the leg says,” he quipped.

The Argentine pontiff repeated that he would like to visit war-torn Ukraine, but offered no details on the state of his plans.

He has another overseas trip planned for a religious congress in Kazakhstan in September.

“For the moment, I would like to go: it’s a quiet trip, without so much movement,” the pope said.