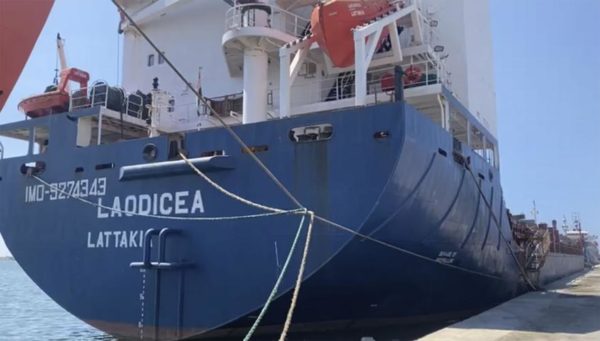 Laodicea , a A Syrian ship under U.S. sanctions has docked in the northern Lebanese port of Tripoli carrying barley and wheat that the Ukrainian embassy in Beirut told Reuters on Thursday had been stolen by Russia from Ukrainian stores. July 29, 2022
Share:

BEIRUT- A Syrian ship under U.S. sanctions has docked in the northern Lebanese port of Tripoli carrying barley and wheat that the Ukrainian embassy in Beirut told Reuters on Thursday had been stolen by Russia from Ukrainian stores.

The Laodicea docked in Tripoli on Wednesday, according to shipping data website MarineTraffic.

“The ship has traveled from a Crimean port that is closed to international shipping, carrying 5,000 tonnes of barley and 5,000 tonnes of flour that we suspect were taken from Ukrainian stores,” the embassy told Reuters.

“This is the first time a shipment of stolen grains and flour reaches Lebanon,” the statement said.

Russia has previously denied the allegations that it has stolen Ukrainian grain. An official from the Russian embassy in Lebanon told Reuters it could not immediately comment.

A Lebanese official confirmed that the issue had been raised during a Thursday meeting with Aoun and noted Ukraine’s general concerns that Russia might try selling stolen Ukrainian wheat to a host of countries including Lebanon.

Lebanon’s economy minister Amin Salam told Reuters that the country’s customs authority and its agriculture ministry were following up on the issue.

Caretaker Foreign Minister Abdallah Bou Habib revealed Friday that Lebanon has received “a number of protests and warnings from a number of Western countries” after Syrian-flagged ship carrying stolen barley and flour arrived at Tripoli’s port on Thursday.

“The relevant authorities in Lebanon are currently examining the ship and Lebanon has not yet managed to identify the source of the material it is carrying,” Bou Habib added, noting that the appropriate decision would be taken later.

The agriculture caretaker minister, the head of customs and the head of Tripoli port did not immediately respond to requests for comment.

“We are checking the accuracy of the information that has been mentioned in the media, and we have laws and we resort to Lebanese law,” Lebanon’s transport minister Ali Hamie, who is closely associated with the Iranian-backed Hezbollah militant group told Reuters.

A customs official and shipping source told Reuters that the Tripoli port had not offloaded the ship due to suspicions it was carrying stolen goods.

“Nothing was taken off of the ship – as soon as we got the information, we stopped everything,” the customs official said.

The Laodicea is one of a trio of ships owned by the Syrian port authority that Ukraine says have been transporting wheat plundered from stores in Ukrainian territory recently overtaken by Russia.

All three ships have been sanctioned by the United States since 2015.

When asked about the Laodicea’s docking in Tripoli, State Department spokesman Ned Price said he could not comment on the specific vessel but said he could “confirm the fact that the Russians have pilfered grain belonging to Ukraine” in general.

The Laodicea’s arrival coincides with a new round of severe bread shortages across Lebanon, where a three-year economic crisis has slowed imports of subsidized wheat.

Bakeries were inundated this week with frustrated crowds in a country where about half the population is food insecure, according to the World Food Programme.

Lebanon used to import about 60% of its wheat from Ukraine, but those shipments have been disrupted by Russia’s invasion and blockade of the main Black Sea ports through which Ukraine once exported.

Ukraine had resumed legal exports of wheat to Lebanon in mid-July, according to the Ukrainian embassy and the head of Lebanon’s mills association.

The Ukrainian Embassy in Lebanon on Friday issued a statement to clarify why it believes that flour and barley aboard a Syrian-flagged ship docked in Lebanon’s Tripoli had been “stolen” from Ukraine.

“During the Russian occupation, more than 500,000 tons of grain were stolen from the occupied Kherson, Zaporizhia and Mykolaiv region,” it said.

“There were attempts to transport most of these grains to Middle Eastern countries, including Egypt, Turkey and Syria, and attempts to transfer them to Lebanon were recorded,” the embassy added.

It said that law enforcement agencies in Ukraine have “proven the involvement of 78 ships in the illegal transportation of stolen Ukrainian grain.”

“At the same time, this list is incomplete and is constantly updated. The ship Laodicea appeared on this list,” the embassy added.

It noted that the facts of illegal exportation of grain from Ukraine were confirmed not only by law enforcement agencies, but also within the framework of journalistic investigations, as well as by the Imagining Russian Hackers initiative.

This report, on page 18, refers to the Laodicea, which was registered in Feodisia on July 4, the embassy said.

“Today, a Ukrainian court judge issued a decision on the seizure of the ship Laodicea with the cargo on board. Additionally, it should be noted that this vessel is sanctioned by the United States of America and subject to Caesar Act,” it added.

A Turkey-based grains trading company denied Friday that barley and flour aboard a ship docked in the Port of Tripoli in Lebanon had been stolen from Ukraine, saying the source of the flour is Russia.

But The Turkish company did not reveal how Russia got the wheat .

An official at Loyal Agro Co LTD said that the firm had sought to sell 5,000 tons of the flour on the ship to private buyers in Lebanon and not to the Lebanese government.