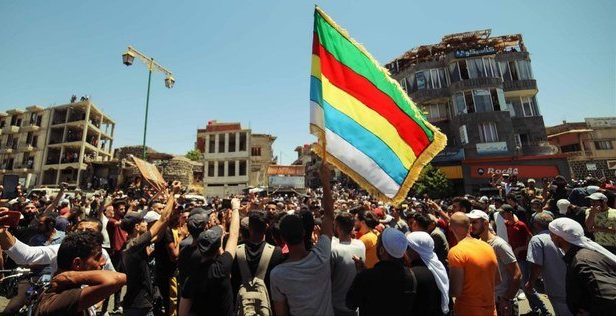 Sweida – Jabal Al Arab – At least 17 people have been killed and dozens wounded in the Syrian province of Sweida in clashes between armed residents and gangs aligned with Bashar al Assad’s state security agencies, activists and local media said on Thursday.

The Druze-majority province has remained mostly shielded from the bloody conflict that ravaged the rest of the country since 2011 but sporadic rallies have taken place over deteriorating economic conditions. The Syrian government exerts less military and administrative control of the region than other government-held areas.

Residents have been growing increasingly frustrated at the Assad government-backed fighters carrying out arbitrary detentions, random roadblocks and kidnappings for ransom, said Rayan Maarouf, an activist and head of the Suwayda24 local media outlet.

At the weekend, the detention of one resident prompted others to set up informal roadblocks and detain members of government-backed gangs and besiege their bases, Suwayda24 reported.

“This uprising flared up very suddenly and there were attacks on the bases of these armed groups, which are reinforced with heavy weapons,” Maarouf told Reuters late Wednesday.

One resident of Atil, one of the villages swallowed up by fighting, said the clashes were so heavy he was unable to leave his house to get urgent medical supplies for his sister.

“It was 15 hours of full-on war. The cars, the solar panels, the water tanks – they all got destroyed,” said the resident, who preferred to use his first name Shadi.

The resulting fighting left 17 people dead according to Sweida’s health directorate, which was cited by both Suwayda24 and the pro-government Al-Watan newspaper on Thursday.

Most of the dead were members of the state-aligned gangs and muted funerals were held for them on Thursday, Maarouf told Reuters.

The rest, from a movement linked to Druze religious figures and known as the “Men of Dignity,” were mourned in two processions that drew in around 2,000 people each, he added.

The Syrian government has not commented on the violence but Al-Watan said the fighting had quietened and negotiations over a settlement were underway.

The man kidnapped at the weekend was ultimately released, Sweida24 reported.

Sweida had seen rare protests earlier this year, when dozens gathered in the provincial capital to demand a halt to cuts in gas subsidies.

Anti-government protesters took to the streets against President Bashar al-Assad’s government last February and April over growing anger in Syria at corruption and worsening living conditions.

The Syrian government’s decision to stop subsidies for bread, diesel, cooking gas, petrol, and other essential items, for hundreds of thousands of people, triggered outrage.

Coupled with the continued collapse of the Syrian pound, and skyrocketing inflation, it was enough to convince thousands of people in Sweida to take to the streets and risk the same kind of repression that was meted out to Syrian protesters in 2011.

The difference has been, this time, that it was Sweida that rose up in anger, while other areas remained quiet.

The Druze in Sweida appear to be more willing to protest now.

“In the earlier years of the crisis, we were put in a difficult spot between wanting change and preserving our area,” Hadi Abu al-Joud, a Druze student activist, told Al Jazeera last April

Abu al-Joud explained that many people in Sweida were initially sympathetic to the opposition, but concerned about various wings of the armed opposition that had targeted Druze people.

The Syrian government has imposed what Abu al-Joud called an “economic blockade” on Sweida as a punishment for the protests, worsening inflation and making it more challenging for families to secure even the most basic groceries.

Corruption in government offices in the province has also skyrocketed, according to Abu al-Joud. “People waited for weeks to get passports in the immigration building,” he said. “It’s so corrupt that they won’t give you anything unless you bribe them.”

According to the United Nations, 90 percent of the country lives in poverty, while 60 percent are at risk of going hungry.