China Issues military warnings to US on Pelosi’s Taiwan Trip 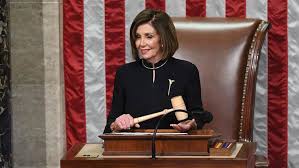 China issued strong private warnings to the US government about a planned trip to Taiwan by House Speaker Nancy Pelosi, which included a possible military response, the Financial Times reported.

The warnings were much stronger than those made previously when China wasn’t pleased with US policies and actions related to Taipei, the paper said, citing unidentified people familiar with the issue.

China’s foreign ministry earlier this week officially vowed to take a “resolute and strong” response to any Taiwan visit by Pelosi, which was reported to be next month. Her trip would be the first by a House speaker to Taipei since 1997.

Pelosi’s office didn’t respond to a request from the Financial Times for comment about whether she might abandon her trip.

Beijing routinely responds angrily to countries that deal directly with Taiwan, which China claims as part of its territory. President Joe Biden also raised doubts about whether the visit would go ahead, saying Wednesday that the military thinks it’s “not a good idea right now.”