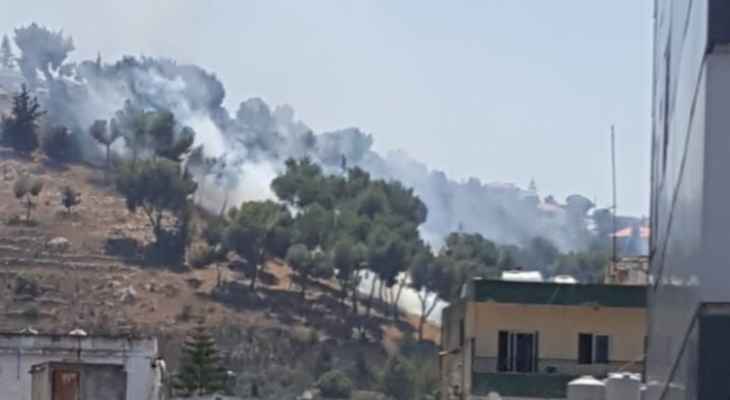 A huge fire erupted on Saturday in Jabal Al-Ruwais pine forest in the city of Nabatiyeh, south Lebanon
Share:

A huge fire erupted this afternoon in Jabal Al-Ruwais – Beaufort in the city of Nabatiyeh, south Lebanon according to Lebanese media reports . The fire reportedly broke out in a pine forest . The hot temperature is contributing to the spread of fire towards residential homes.

This development comes after another fire erupted in the Hussein Qabalan carpet factory in the southern town of Zefta in the city of Nabatiyeh . The fire there has been going on since yesterday evening, as the building is in danger of collapsing due to the high temperature inside the building .

The helicopters of the Lebanese army came Saturday morning to the town to provide assistance in putting out the fire.

Southern Lebanon is a stronghold of the Iranian-backed Hezbollah militant group . There is concern that the fires could have been caused by Hezbollah explosives which are reportedly stored in residential areas throughout south Lebanon

The fires erupted as millions of Muslims across the globe — including Lebanon are celebrating Eid al-Adha , one of the biggest holidays of the Islamic calendar.