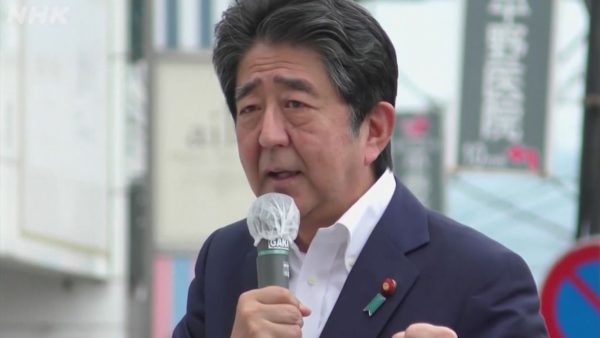 Former Japanese Prime Minister Shinzo Abe, an ultra-nationalist who served in the post longer than anyone else before stepping down in 2020, was shot and killed on Friday at a campaign rally.

Police tackled and arrested the suspected gunman at the scene of an attack that shocked many in Japan, which is one of the world’s safest nations and has some of the strictest gun control laws anywhere.

“It is barbaric and malicious and it cannot be tolerated,” current Japanese Prime Minister Fumio Kishida told the media.

Abe, 67, served as prime minister in 2006 and 2007, and again from 2012 to 2020, when he suddenly resigned citing health issues. Despite leaving office, he remained influential within the ruling Liberal Democratic Party (LDP) and continued to be a force on Japan’s political landscape.

He was in the city of Nara, in the southwest, campaigning for a parliamentary election when he was shot from behind by a man wielding what appears in photos to be a homemade gun.

Footage of the attack shows Abe standing, holding a microphone and speaking, when two booming shots ring out.

Japan’s public broadcaster, NHK, reported that the suspect served in Japan’s Maritime Self-Defense Force for three years in the 2000s.

Tributes poured in from around the world

The White House said in a statement it was “shocked and saddened” by the attack. Secretary of State Antony Blinken, who is in Asia for a meeting of Group of 20 foreign ministers, called the assassination “profoundly disturbing” and described Abe as a leader of great vision.

Indian Prime Minister Narendra Modi described Abe as “a towering global statesman, an outstanding leader, and a remarkable administrator.” He said on Twitter that July 9 would be a day of national mourning in India.

As prime minister, Abe worked to build up Japan’s military, counter China’s growing clout and sought to boost and reform the economy though a program that came to be known as “Abenomics.”

He ultimately failed to achieve his most cherished political goal, and that of his party: to revise Japan’s pacifist, post-World War II constitution. Abe proposed revisions would strengthen the government’s emergency powers, while downplaying the role of human rights. Abe felt the political values imposed by the U.S.-backed constitution were alien to some of Japan’s traditions, such as reverence for the emperor.

Abe was, however, successful in passing legislation in 2015 that allows Japan’s military to expand its operations overseas in support of allies, including the United States.

When he left office, most Japanese were dissatisfied with his handling of the coronavirus pandemic, feeling he moved too slowly to impose a state of emergency mostly out of concerns about the economy.

In recent months, Abe had been a more outspoken critic of China. Earlier this year, he called on the United States to drop its long-standing practice of “strategic ambiguity” and give Taiwan assurances that it could count on American help in the event of an attack by China.

He also angered China by saying “a Taiwan contingency is a Japan contingency,” and noting that it would be impossible for Japan not to be sucked into a conflict over the self-governed island that Beijing considers a part of China.

Security officers detained the attacker, who made no attempt to run, and seized his weapon which was reportedly a handmade gun.

The suspect has been identified as Nara resident Tetsuya Yamagami. Local media reports say he is believed to be a former member of Japan’s Maritime Self-Defense Force, Japan’s equivalent of a navy. He is said to have left active service in 2005.

Officials have yet to comment on the suspect’s motives, but local media outlets reported that Mr Yamagami told police he was “dissatisfied with former Prime Minister Abe and aimed to kill him”. He is also reported to have told officers that he did not hold a “grudge against the former Prime Minister’s political beliefs”.

Police also discovered several possible explosive devices during a search of his home, and NHK said bomb disposal technicians are preparing to carry out a controlled explosion on the premises.