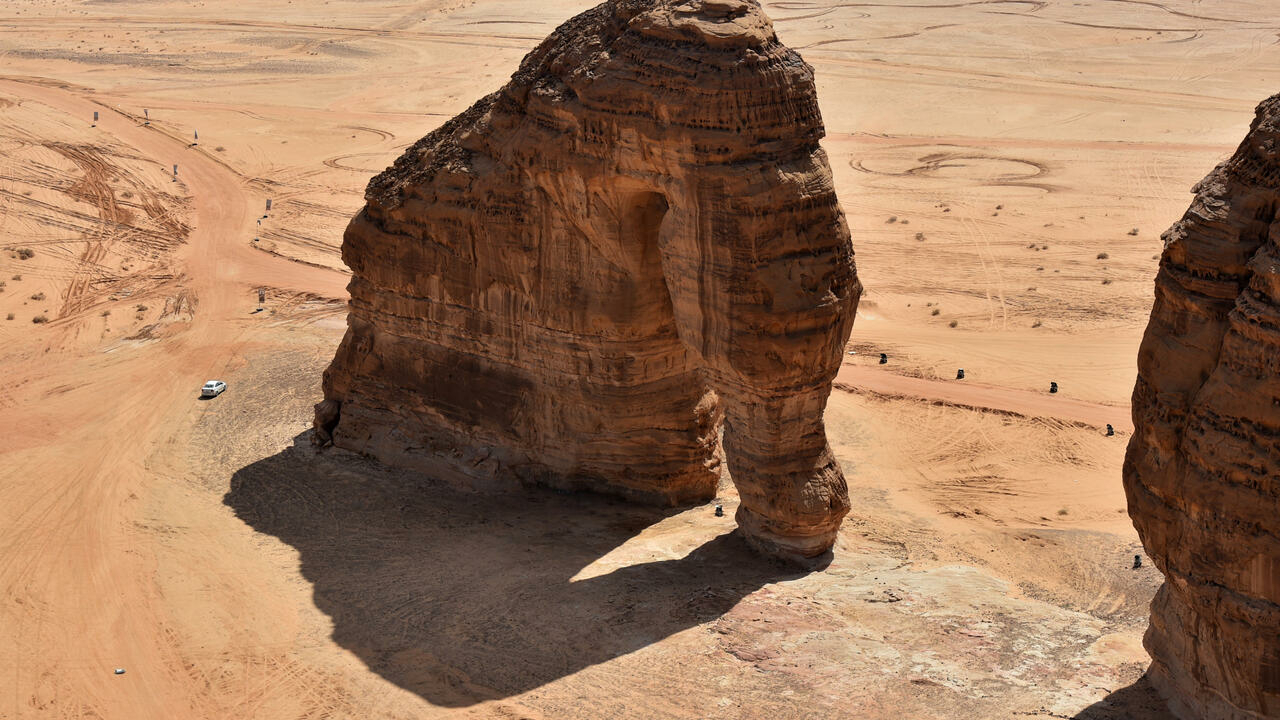 A picture taken February 11, 2019 shows an aerial view of the Elephant rock at the desert of Saudi archaeological site in town of al-Ula in northwestern Saudi Arabia. The kingdom aims to triple foreign tourism this year (up from 4 to 12 million) according to its tourism minister
Share:

An uptick in domestic travel in 2020 and 2021 –- authorities tallied a record 64 million “domestic visits” last year –- helped save the nascent Saudi tourism sector from collapse, and now authorities want to seize more of the international market, Ahmed Al Khateeb said in an interview.

“Now we are pushing and moving to attract more… international visitors,” he said, specifying the goal for this year was 12 million, up from 4 million in 2021.

“We are back and we are very optimistic. Countries started to open their borders, restrictions started to ease down and people started to travel,” he said.

Saudi Arabia has raised eyebrows with its goal of attracting 100 million visitors by 2030, an element of Crown Prince Mohammed bin Salman’s Vision 2030 reform agenda intended to diversify the oil-dependent economy and open up to the world.

While the kingdom has in recent years relaxed rules barring cinemas, gender-mixed concerts and sporting extravaganzas, other regulations including an alcohol ban remain in place, potentially denting its appeal.

Khateeb specified Sunday that of the 100 million targeted visitors for 2030, 30 million are meant to come from abroad while the rest would be people travelling within Saudi Arabia.

Some 30 million visits will be religious trips by both residents and foreigners, largely to Mecca and Medina, Islam’s two holiest sites.

Next month authorities plan to allow one million pilgrims to perform the hajj, after two years in which the coronavirus pandemic forced drastic limits on numbers for the annual ritual.

Another high-profile feature of the tourism push is so-called giga-projects spearheaded by Prince Mohammed, including the $500 billion futuristic megacity known as NEOM and Diriyah, the seat of the first Saudi state which is being redeveloped as a heritage and entertainment destination.

A restaurant district in Diriyah is set to open in September, while other elements of such projects will come online “from 2025 onwards”, Khateeb said.

“This is a new level of tourism which does not exist today,” said Khateeb who sits on the board of NEOM.

“Saudi Arabia will change the tourism landscape globally… the destinations that Saudi will offer by 2030, it’s something completely different,” he added.