Protests erupting in Iran while nuclear talks drag on in Vienna? An explainer 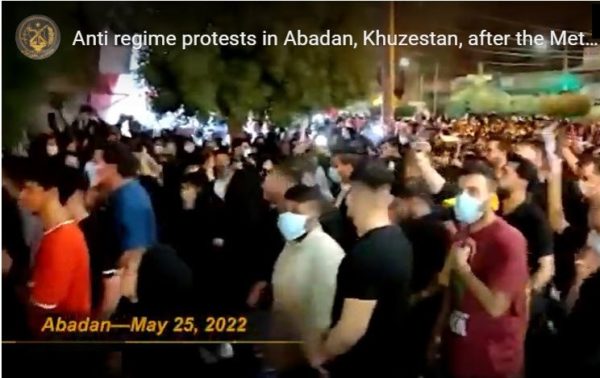 TEHRAN — A tide of social unrest is washing over Iran as the country’s economy — devastated by years of harsh U.S.-led sanctions — continues to tank. Farmers, factory workers, teachers, bus drivers and others have demonstrated or gone on strike to protest their deteriorating living conditions, braving the heavy hand of authorities who brook no dissent.

At the same time, negotiations in Vienna have stalled between Tehran and world powers over reviving the nuclear accord that collapsed in 2018 when the U.S. withdrew from the agreement. Known as the JCPOA, the deal limited Iran’s nuclear program while granting the country billions of dollars’ worth in sanctions relief.

Statements by negotiators have veered wildly between optimism that a breakthrough is imminent and deep skepticism that an agreement can be reached. Although President Biden has urged the deal’s revival, the administration’s special envoy for Iran said last week that its prospects were “tenuous” at best, in part because the war in Ukraine has hardened Russia’s position.

Here’s a look at how the recent wave of protests and strikes in Iran and the talks over the nuclear deal are intertwined for the country’s theocratic regime.

How are the unrest and the nuclear deal related?

#Iran : Angry protest in streets of Abadan over collapse of 10-storey building this morning #آبادان pic.twitter.com/vCvmyd22A6

After the collapse of the accord four years ago, the U.S. under then-President Trump switched to a “maximum pressure” campaign that has further strangled the Iranian economy, while Tehran has pressed ahead with enriching its stockpile of uranium to levels that approach weapons grade.

In 2019, the deadliest riots since the Islamic Revolution of the 1970s broke out amid popular anger over skyrocketing prices of fuel and other goods. A brutal government crackdown resulted in the deaths of between 350 and 1,500 people.

Although the wide-scale protests were crushed, discontent has never stopped simmering, and demonstrations and strikes by various sectors continue to flare up.

“Don’t you guys use cooking oil? Or chicken? Don’t you buy sugar or rice? Don’t you eat anything? I shouted this to a riot police officer,” one protester said on Twitter.

Is there anything else fueling the strife?

Iran’s standoff with the West in the early years of the Islamic Republic drove it to implement a massive food self-sufficiency plan, which has resulted in a dire water crisis for the arid country. Frequent farmers’ riots from 2009 to 2019 were a direct consequence of that plan, which dried up many rivers and lakes through over-consumption of underground water supplies.

Over the last year, dozens of cities have been the scene of protests over economic hardship, air pollution and drinking water, including riots over dried-up Lake Urmia in northwest Iran. The government’s plans to address the water shortage have been hamstrung by its lack of funds and the effects of international sanctions.

“Unfortunately, we are almost bankrupt in water resources and have lost 30 billion cubic meters of our renewable underground water resources due to excessive consumption and land subsidence,” said engineer Mostafa Fadaeifard, an expert in water management. “The country is prone to more and more riots, even much more serious than the ones we had before.

“Unless the JCPOA is revived and more cash flows into the major desalination projects, the country will be lost.”

A building collapse May 23 in southwest Iran that killed 37 people has also sparked angry protests, including one Sunday night at which demonstrators booed and shouted down a cleric sent by Supreme Leader Ayatollah Ali Khamenei to speak to mourners. Video of the event appeared to show police clubbing protesters amid clouds of tear gas.

Can a revival of the nuclear deal quell unrest in Iran?

The Iranian government is under intense pressure to improve people’s lives, which a reinstatement of the JCPOA could help achieve by relaxing the international sanctions that have strangled the economy.

Many Iranians have pinned their hopes for an economic comeback on the revival of the nuclear deal. But as speculation circulated about a possible failure of the talks, Iran’s currency, the rial, lost 20% of its value.

Some politicians and analysts have maintained their confidence that, as one member of parliament recently said, an agreement is “at hand.”

Mojtaba Najafi, a blogger, commentator and professor of media and communications at the Sorbonne in Paris, said he was optimistic about the deal’s chances, even though current Iranian President Ebrahim Raisi, who succeeded moderate Hassan Rouhani last August, is a conservative hard-liner.

Iran’s supreme leader, Khamenei, “still strongly supports” revival of the nuclear accord, Najafi said. “He didn’t endorse it in the final months of Rouhani’s government because he didn’t want to see a moderate or reformist government reaping its benefits. Yet he doesn’t want to see the volatile condition of the country get further exacerbated.”

Najafi said the accord’s revival would provide at least some temporary economic relief and allow for space to tackle stubborn structural problems that have held back Iran’s development.

“Should the JCPOA come back to life, contrary to what many political advisors believe, it would bring fresh blood to Iran’s civic society, which is the driving force for real change in Iran,” Najafi said.

Has Iran been subject to protests and riots before?

In the Islamic Republic’s first two decades, large-scale protests were rare and faced the iron fist of rulers who deemed the protesters to be enemies of God.

Demonstrations by elites and students demanding more political and social freedoms were harshly put down in 1999. Some government reforms as well as rapprochement with the West under popular reformist President Mohammad Khatami alleviated some of the discontent for several years.

In 2009, the disputed reelection of hard-line President Mohammed Ahmadinejad ignited the worst riots that post-revolution Iran had seen up to that point, in which at least 72 protesters were killed and opposition leaders put under house arrest.

The nationwide unrest that rocked Iran in 2019 focused on economic grievances rather than political ones. Those grievances continue to give rise to wildcat strikes and protests like those that the country has experienced in recent weeks.

Khazani is a special correspondent. Times staff writer Henry Chu in London contributed to this report.