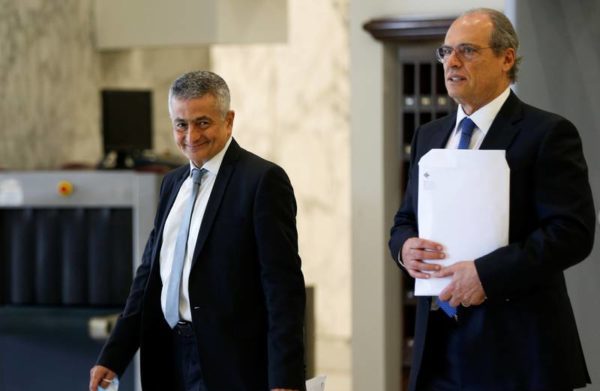 Polarization within the new Parliament may lead to decisions taking more time “and this is a risk to the programme”, Mr Al Shami said at a conference at Universite Saint Joseph in Beirut.

Lebanon’s 2019 economic collapse is widely regarded as being caused by years of corruption and mismanagement by the country’s elite.

The World Bank warned on Monday that the country will have to adopt a credible, comprehensive and equitable macro-financial stabilization program  to avoid the destruction of Lebanon’s social and economic networks.

Legislators and successive cabinets have taken no action to solve the crisis because of disagreements over who should pay for the financial sector’s losses, estimated by  Al Shami at $72 billion, or 3.5 times the country’s GDP.

“It is extremely hard to deal with these losses without some pain,” he told hundreds who gathered to listen to him in a rare public debate about the IMF program.

“If we don’t move quickly, I’m afraid that things will deteriorate much further.”

Al Shami revealed that  Lebanon’s central bank is spending between $300 million and $400m a month,  to subsidize some imports and prop up the local currency.

The Lebanese pound has lost more than 90 per cent of its value since the start of the crisis.

“We still have a few months left. Then what will happen next?” He asked. “Nobody knows. I think it would be a very difficult situation. Even politicians realize that we are hitting a wall.”

Analysts previously told The National they believe the results of the May 15 parliamentary election could usher in more political deadlock, delay reforms and jeopardize the arrival of much-needed international aid.

One of the most unequal countries in the world

The Cabinet’s financial rescue plan seeks to give priority to depositors who had less than $100,000 in their bank account before lenders brought in illegal capital controls in November 2019 as US dollars dried up.

This represents 87,8 per cent of depositors who collectively hold about $34bn, according to Al Shami.

“There’s a huge concentration of money,” he said.

Large accounts will not be forgotten, he added.

“We can return most of the money to depositors but of course as has been said before, over time.”

Lebanon is one of the most unequal countries in the world. The wealthiest 10 per cent of the population hold almost 70 per cent of total personal wealth, according to publications by Lebanese economist Lydia Assouad.

He said some inflated estimates from politicians were “laughable” and quoted a study that said that they were worth between $11 bn and $21 bn.

“This amount is too small to close the gap that exists in the banking sector,”  he said.

Selling or investing state assets would be like taking money from Lebanon’s population of about 5 million people to give it to depositors who, in some cases, have more than $100m in the bank, he said.

“Salaries are extremely low,” he said, with many Lebanese unable to afford fuel for their car.

“It would be the reverse of Robin Hood, taking from the poor to give it to the rich. It’s not acceptable.”

Al Shami worked at the IMF for about two decades.

Nearly three quarters of Lebanon’s population lives in poverty and struggles with soaring inflation and shortages of medicine, water and bread.

Al Shami led negotiations with the IMF, which restarted in January after a first round collapsed in 2020.

The fund said it could support Lebanon with the equivalent of about $3 bn over four years, but only after reforms, including restructuring of the banking sector, were brought in.

The Cabinet then adopted a financial recovery plan just two days before its mandate expired on May  22.

This took place close to two years after the previous government’s proposed a similar plan before starting short-lived negotiations with the IMF.

At the time, the plan faced heavy backlash from influential parliamentarians and the ABL.

It was then shelved after a deadly explosion at Beirut’s port in August 2020 killed more than 200 people and wiped out large parts of Beirut.

Last week, the ABL again criticized the latest government’s recovery roadmap. As in 2020, the association said state assets should be invested to cover the country’s financial losses.

Al Shami accused the ABL of being in “denial.”