There is a sickness in America 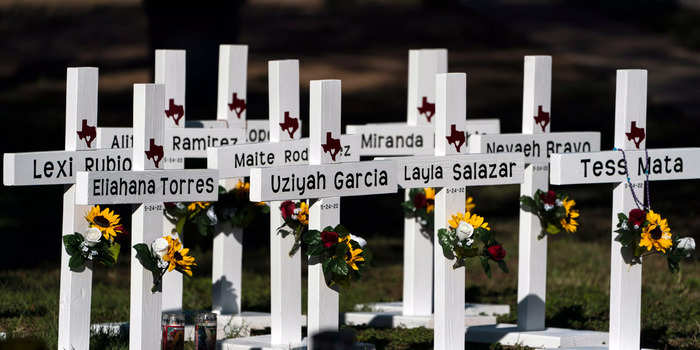 Crosses with the names of Tuesday’s shooting victims are placed outside Robb Elementary School in Uvalde, Texas, Thursday, May 26, 2022.Jae C. Hong/Associated Press. A 10-year-old boy told CNN that “almost all” of his friends died in the Uvalde shooting on Tuesday.In a heartbreaking moment, Jayden Perez began to list the names of his murdered friends.
Share:

Like the country he leads, Joe Biden looked and sounded exhausted.

The United States president was obliged, yet again, to “address” the nation in the blunt-force-trauma-like aftermath of the murder of schoolchildren in a small Texas town – Uvalde – that few had heard of, but that now joins the gruesome roster of other towns that will always be synonymous with foul and sudden death.

Newton. Parkland. Aurora. Charleston. Boulder. Roseburg. On and on and on.

Biden didn’t “address” America. He mostly whispered to America, punctuated by bursts of familiar exasperation, outrage and futile calls to “do something” in response to this latest act of still incomprehensible terror.

Nineteen kids and two teachers were slaughtered inside what should be a happy place filled with joy and the raw, unspoiled energy of a classroom where boys and girls learn and play.

Perhaps it was fatigue. It was, more likely, defeat. Biden’s grim tone and forlorn posture conveyed a quiet resignation. Despite his immense power, Biden understands, I think, that there is a sickness in America that is beyond any rational remedy or cure.

There is a sickness in America that is unique to America. No other country convulses with such premeditated violence so often against so many innocents at school, at work, at church and what seems like just a moment ago, at a grocery store in Buffalo. More innocents were picked to die in that place, at that time, by a calculating, hate-filled murderer because of the colour of their skin.

So, in the sad days ahead, America and the rest of us will watch and listen to the same pantomime we have watched and listened to before. The same scenes. The same grief. The same fury. The same vigils. The same funerals. The same questions. The same answers. The same politicians spouting the same mephitic excuses. Guns don’t kill children; people do. A bad guy with a gun can only be stopped by a good guy with a gun. A merciful God is preparing, once more, to welcome his bullet-ridden children to a better, kinder place.

Given that Texas is a “red” state, the politicians doing the talking on TV these days are largely white Republican men. They are the same white Republican men – a governor, senators and representatives – who lecture and scold a rainbow of women about the sanctity of life, of the unborn “child”.

They force women to comply. To submit. To bend to their “faith” and “beliefs” at the expense of a woman’s right and freedom to choose and exercise agency over not only her body, but her future, too. They pass laws and decrees to deny women sovereignty over their wombs to protect, they say, “precious” life.

But once the child is born, their abiding and evangelical fidelity to that “precious” life evaporates as quickly as the morning mist.

They abandon that life. They discard it since it is no longer politically expedient or profitable to pay rhetorical heed to that life. Worse, they sacrifice that life to the dreadful whims of troubled and sinister minds whom they allow to amass weapons of war with the ease of buying candy at a corner store.

They are content to see those “precious” lives annihilated in an instant for position, power and the bushels of money from other charlatans and zealots that help them keep their positions and power.

They claim to defend the US Constitution. It is a lie. They are the enemies of “domestic tranquility” and the “general welfare”. They are, instead, the agents of chaos, anguish and death.

They are hypocrites. They are complicit. They are the sickness.

The late comic George Carlin knew who and what they are. This is what he said about them in 1996:

“Pro-life conservatives are obsessed with the fetus from conception to 9 months. After that, they don’t wanna know about you. They don’t wanna hear from you. No nothing! No neonatal care, no daycare, no Head Start, no school lunch, no food stamps, no welfare, no nothing. If you’re pre-born, you’re fine, if you’re preschool, you’re f****d.”

When, inevitably, the caravan of attention leaves and the shock subsides, the mothers, fathers, sisters, brothers and the children left behind will have to go on, as best they can, with what remains of their lives. Alone.

Soon, the white Republican men will return to their lecturing and scolding about the “sanctity” of life. They will bide their time. Patience, they know, is a virtue and an advantage in politics. The urgency and imperative of the moment quickly fade in a nation with the attention span of a 24-hour news cycle.

In the meantime, the white Republican men will say what they always say about hearts, thoughts and prayers and they will do what they always do when children are massacred: Deny, deflect and blame anyone or anything but the guns and the profiteers who sell them.