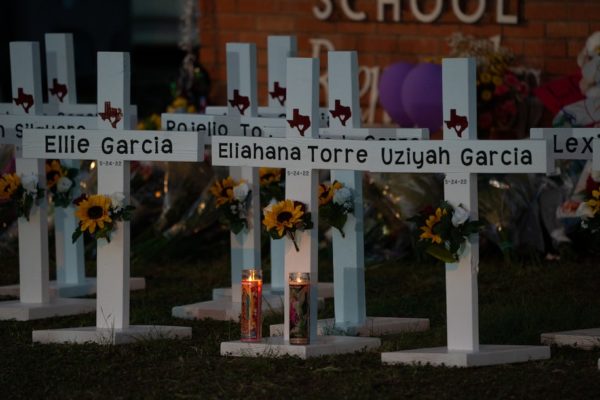 White crosses marking the deaths are pictured in front of Robb Elementary School in Uvalde, Texas early on the morning of Thursday May 24 , 2022 . (Sarah L. Voisin/The Washington Post)
Share:

Daniel Defense manufactured the rifle used to kill 21 people in Texas town; its plans to exhibit at NRA convention this weekend apparently are off.

Gunmaker Daniel Defense posted online an advertising photo of a toddler holding one of its AR-15-style rifles just days before one of its firearms was used in the elementary school shooting in Uvalde, Tex.

The photo shows a young boy holding the rifle on his lap, along with the caption: “Train up a child in the way he should go, and when he is old, he will not depart from it.”

That is a reference to a Bible proverb.

The caption ends with an emoji of two hands held together in prayer.

In the photo, the boy is sitting cross-legged and looking down at the firearm on his lap. The ammunition clip is lying separately on the ground. He is wearing a T-shirt that reads, “#Rascal.” An adult’s arm is seen pointing at him.

Daniel Defense posted the image to Twitter on May 16.

The next week, a gunman used a Daniel Defense DDM4 Rifle to kill 19 children and two adults at a school in Texas, authorities said.

The rifle is modeled after the M4 carbine, the U.S. military’s go-to rifle, according to a Daniel Defense blog post. Daniel Defense, which manufactures the weapon, is based outside Savannah, Ga.

Shortly after the school shooting, Daniel Defense protected its tweets, hiding them from public view. But screenshots of its older tweets circulated online. Archived versions of the Twitter messages were also available.

Daniel Defense did not respond to requests for comment. In a statement about the shooting, it said in part, “We will keep the families of the victims and the entire Uvalde community in our thoughts and our prayers.”

On the same day as the shooting, Daniel Defense tweeted again — perhaps unaware of the devastation that had just taken place at a school in a small Texas town.

“Do you run a DDM4 V7?” the post asks, over a photo of a Daniel Defense branded ball cap and vest, its rifle in full view.

One of the people set to make an appearance at Daniel Defense’s booth on Saturday was Colion Noir, a prominent Black gun-rights activist and attorney, according to online ads.

But those plans — along with Daniel Defense’s entire exhibit — appear to be scrapped.

The NRA’s exhibitor list no longer includes Daniel Defense among the hundreds of gunmakers, firearm parts manufacturers and taxidermists appearing at the convention hall.

Booth No. 4839, once claimed by Daniel Defense, now lists a new name: the NRA.