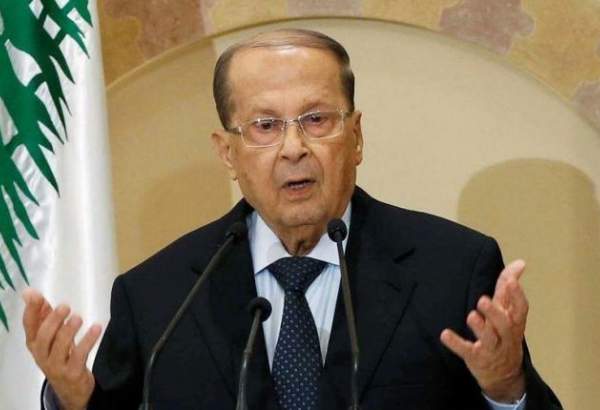 File photo of Lebanese president Michel Aoun: Under Aoun, poverty prevailed, and the young men and women carried their bags in search of a decent living. Lebanon lost its stability, prosperity and meaning.
Share:

One of my Lebanese friends and a reader of Asharq Al-Awsat has blamed me. He said: “You go to Berlin to write about the situation of Ukrainian and Syrian refugees. Do you think our conditions are better than theirs? Haven’t you been told that cancer medicines are lacking? That the number of those searching the bins to fill their empty stomach is increasing daily… That the Lebanese jumped into the death boats and lost their bodies off their homeland… That homes are almost void of young people… And that humiliation is every day’s meal, as the loaf of bread has become beyond reach?”

He added: “The zaatar man’oucheh is sold for LBP20,000, and the falafel sandwich for LBP40,000. A kilo of tomatoes costs LBP40,000. The minimum wage is equivalent to the price of four gasoline tanks and four kilograms of meat.”

He continued: “They plundered the citizens’ deposits. They plunged the country into darkness. They destroyed the university, the bank and the hospital. Ukrainians have a Western embrace that will rebuild their country. They have Zelensky, who raises his voice and scolds the conscience of the world. We have no one to defend us. Our institutions are vacant, even if men and consultants move in. I advise you to visit the country. The visit may be a farewell, because Lebanon can end before the expiration of Michel Aoun’s era.”

In the fall of 2016, the Lebanese Parliament elected General Aoun as President of the Republic. The election was a kind of endorsement of a coup represented in imposing a long vacuum in the presidential palace and stipulating that only Aoun be elected to fill this vacuum.

Back then, my Lebanese friend was somehow optimistic. He believed that Hezbollah, which brought Aoun to the presidency, would not let his major Christian ally fail. He expected that the first year of the new era would witness the birth of a “defense strategy” that would restore the image of the state, its security and constitutional institutions. He also hoped that the party would offer a precious gift to Aoun by refraining from using Beirut as a platform to support the open Iranian coup in the region. My friend was confident that Aoun deserved such gifts, in light of the stance he took over the series of assassinations, the siege of the Grand Serail, and the events of May 7.

But Aoun’s tenure has almost elapsed without receiving the gifts that could have saved the country from the “great collapse.” I was not as optimistic as my friend, but I wished for the general’s success in the palace.

The truth is that Aoun’s story is long, thorny and painful. His popularity cannot be denied, and his ability to be harsh and offending cannot be overlooked. He was an officer who despised weak legitimacy, and concealed a coup under his olive green uniform. He trained in the barracks on the illusion of the savior and the disrespect of the civilians and the “pie eaters”. Like all Maronite politicians and generals, he was afflicted with the “curse of the palace.”

The long stay in exile deepened Aoun’s feeling that the palace was being stolen from him. He felt it was taken from him when President Elias Hrawi’s was elected and his residency was further extended. It was also stolen when it was given to General Emile Lahoud. When Rafik Hariri’s remains were scattered, the general returned from exile, and the symptoms of the savior and “the curse of the palace” augmented.

He moved from the side of Bashir Gemayel to that of Hassan Nasrallah, awaiting his presidential dream to be fulfilled. His bitterness doubled. He saw the palace being stolen again for the benefit of a general named Michel Suleiman. He ran out of patience.

About six years ago, after he played the role of dismantling the March 14 environment, he finally got the opportunity, as the vast emptiness of the palace alarmed his opponents. Saad Hariri, Walid Jumblatt and Samir Geagea agreed to take the bitter drug so that we would not call it the cup of poison. Only Nabih Berri refused to swallow the medicine. There were those who whispered that day that Hezbollah’s commitment does not entail paying the price for his success.

To ensure the realization of the dream, the general agreed to enter the palace after obtaining the consent of Beit Al-Wasat, the Clemenceau crossing, and the Maarab checkpoint, despite the chronic lack of conviviality with the chiefs of the three crossings.

At the beginning of the tenure, some people believed that Aoun would seize the historical moment to reinstate balance to the Lebanese structure and restore the state’s image, regardless of the limits of his powers

Some people thought that with Aoun, the palace would be a meeting point and would contribute to alleviating Shiite-Sunni tension… That it would be a bridge of dialogue between Hezbollah and the Lebanese Forces, while keeping the president’s Free Patriotic Movement away from the greed of ministerial seats and administrative appointments.

The Lebanese did not find in the president the former Aoun, who was calling for the state of institutions and threatening to “turn the tables” to fight the corrupt. During his reign, the citizens’ funds evaporated, and Lebanon lost the relationships on which it had relied during difficult hours.

Aoun has coexisted so far with Central Bank Governor Riad Salameh, whom the Lebanese have the right to see before a fair court to explain the strange schemes he designed, with the approval of successive governments and parliaments, and contributed to the terrible collapse.

It’s a sad story for the general. It’s painful for his country. He accepted that his “strong” tenure emerge with two heads, with the ambitious son-in-law overstepping the man who brought him in.

Poverty prevailed, and the young men and women carried their bags in search of a decent living. Lebanon lost its stability, prosperity and meaning.

I know that many forces would have liked to see Aoun fail. But what is certain is that the general’s major blow came from within the ranks that are addicted to applause and praise. The deadly poison meal was prepared in the palace itself, and in the circle that seemed unfamiliar with the realities and balances of Lebanon and the importance of restoring the state to prevent complete collapse.

In the parliamentary elections, quite a few of Lebanese sent a message of protest against the great collapse and the president’s approach. The results showed a certain decline in his popularity within his sect and at the national level.

Will Aoun read the message and punish those who poisoned his days at the palace, or will he just raise the slogan of the “forensic audit” while his tenure is about to end?

Holding Aoun solely responsible for the Lebanese catastrophe is unfair, but to absolve him of responsibility is also a great injustice. Aoun was elected president of an exhausted palace in a tired republic.