First for Saudi Arabia: Flight takes off with all-female crew 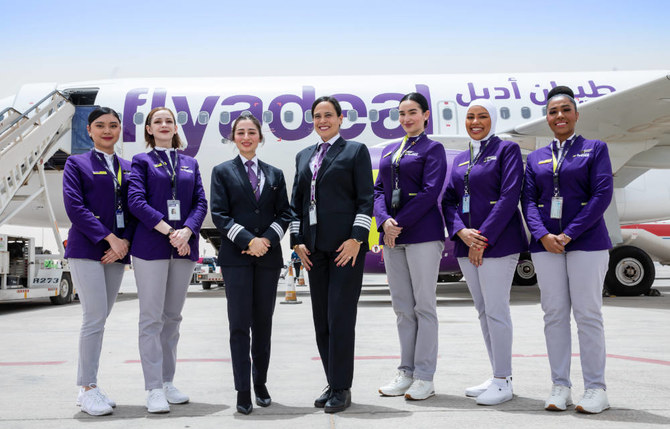 “For the first time in Saudi aviation history! #flyadeal operated the first flight with an all-female crew, the majority of which are Saudis by the newest A320 aircraft. Flight 117, flew from #Riyadh to #Jeddah”he number of Saudi female pilots has grown recently.
Share:

JEDDAH: Saudi low-cost airline flyadeal have announced the first domestic flight in the Kingdom with a fully female crew, most of them Saudis.

The announcement was made on the airline’s official Twitter account @flyadeal on Friday: “For the first time in Saudi aviation history! #flyadeal operated the first flight with an all-female crew, the majority of which are Saudis by the newest A320 aircraft. Flight 117, flew from #Riyadh to #Jeddah”

Saudi women have proved themselves in many careers that men dominated for a long time including aviation-related positions.

Flight 117, with a crew of seven, was co-piloted by Yara Jan, 23, who is also the youngest Saudi female pilot.

Jan told Arab News that she was extremely proud to be taking part in such a historic moment in aviation for Saudi women.

“As a Saudi woman trying to lead my country with a proud step it was a moment of pride and joy.”

Jan graduated from flight school in Florida, US, in 2019, and joined Flyadeal a year ago.

She said that being the co-pilot means assisting the pilot in many key role tasks such as navigation and completing many checklists.

Jan is aware of how important this is for young Saudi women.

“Although being a Saudi woman pilot is new, it is not impossible for our generation, especially with the backing that we are receiving from our beloved country and our respected leaders, who have supported me a lot to become the youngest female pilot in a Saudi airline. I will always be pleased to have the chance to make a positive change.”

The number of Saudi female pilots has grown recently. Three names stand out: Hanadi Zakaria Al-Hindi, the first female pilot to fly with a Saudi commercial pilot license; Rawia Al-Rifi the first to fly an Airbus A320 internationally as a civil aircraft from the UAE; and co-pilot Yasmin Al-Maimani, who was the first woman to co-pilot a commercial plane in the Kingdom.