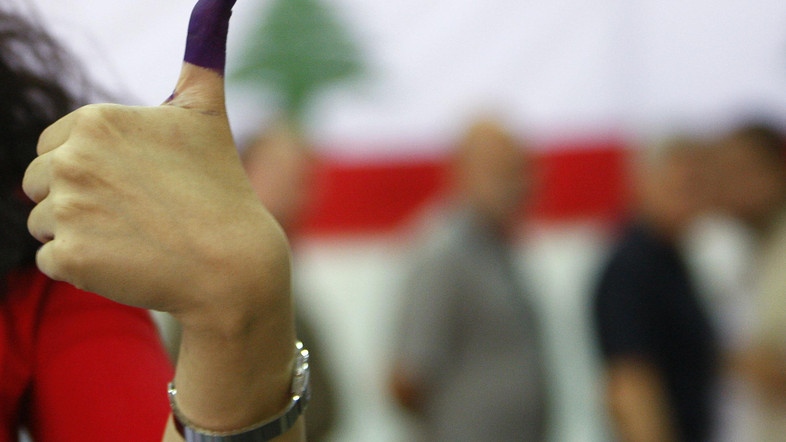 A Lebanese election staff shows her ink-stained finger after casting her vote at a polling station in Beirut .Lebanon’s May 15 election results bring a glimmer of hope
Share:

Lebanon desperately needed good news. With most of the population recently pushed into a state of poverty, a collapse of the Lebanese pound’s value and national debt nearly five times the size of Lebanon’s GDP, the May 15 elections felt like the country’s last-ditch effort at change. The election saw a small but vocal group of reformers gain seats, and Hezbollah and its allies lost their majority. The outcome is not an earthquake, but it offers a glimmer of hope. And hope has been in short supply in Lebanon for several years.

Since 2019, the country has seen massive capital flight and precipitous decline of both foreign investment and expatriates’ deposits into the country. For three years, the Lebanese people have watched their politicians squabble over who was to blame for their dire economic situation. There seemed to be more finger pointing within the parliament than policy ideas and remedies to solve the Lebanese economic situation.

Many Lebanese believed it was the very politicians who were intertwined with the banking elite that were complicit in the exodus of Lebanon’s money. Asking the parliament to reform a banking system it broke seemed futile. To no surprise, Lebanon declared it would be in default of its debt in March, 2020. This was the first sovereign default in Lebanon’s history, and marked another sad turning point in the country’s economic decline.

When the Lebanese people thought things could not get worse, the August, 2020, explosion at the Port of Beirut killed more than 200 people, injured 7,000 people and left 300,000 people homeless. The blast was another reminder of the political mismanagement and economic decay. Then Lebanon, a country that already has more nationals living outside it than in, saw yet another mass emigration. In 2021, the number of people leaving Lebanon quadrupled.

Street protests became a near-daily feature of Lebanese life. Their anti-government slogan was simple: “All of them, meaning all of them.” In May, after two years of protesting for the removal of their politicians, Lebanon finally had a chance to punish the political establishment for their incompetence. The Lebanese people went to the polls in an election that featured many new candidates who vowed to help reform the system from within.

Far more Lebanese expatriates voted in the 2022 elections than the previous one. In cities such as Dubai, long lines of Lebanese waiting to vote was a hopeful sign that this important and often neglected segment would make their voice heard. Without the confidence of the expat community, Lebanon cannot recover from its economic malaise. It will be essential to attract their hard currency and deposits back into the country’s banking system.

It is easy to be pessimistic in Lebanon. Indeed, many people have given up on the political system to enact any change; only 49 per cent of the eligible voting population bothered toturn out for this election. It is understandable that apathy and frustration with the political class is high. Nevertheless, the election represents a modest first step in the right direction.

Unaffiliated to the primarily sectarian-based political parties, 13 individuals calling themselves reformists have won a place in the 128-seat parliament. Many of them built their political capital on the values of the street protest movements and have the support of civil society. They are up against a system that determines the allocation of political posts, including prime minister and president, to individuals based on their sectarian identity. It will not be easy for the reformists to change things, but they will help expose the rot. They will also force other political parties to work with them, as no natural coalition has achieved a majority.

To move the country forward, Lebanon will need the International Monetary Fund to both restructure its debt and give waiting international financial donors some confidence that the country can get its financial house in order. A US$3-billion loan agreement is in final stages of being approved at the IMF, but the Lebanese government will first be required to implement some tough prior conditions. In negotiating the rescheduling of the debt, the reformists will be the eyes and ears of Lebanon’s protest movement. Many Lebanese – desperate for change – are hoping they succeed.

Bessma Momani is professor at the University of Waterloo and senior fellow at the Centre for Governance Innovation.

THE GLOBE AND MAIL