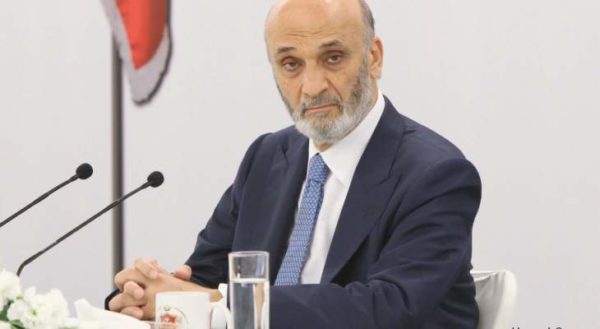 Samir Geagea , leader of the Lebanese Forces that won the largest parliamentary bloc in the May 15 election disputed on Thursday Hezbollah chief Hassan Nasrallah’s claim that “no camp has the parliamentary majority,” stressing that the LF and the so-called change forces are a majority seeing that they agree on “sovereignty” and oppose corruption and Hezbollah’s illegal arms.

“The elections results were resounding and Hezbollah and its ally and the Free Patriotic Movement lost the majority,” Geagea said during a press conference that followed a meeting for the LF’s Parliamentary bloc.

Hezbollah and allies won 6. 2 seats in the 128 member parliament down from 71 . Despite losing the parliamentary majority, Nasrallah declared victory to which Geagea responded:

“How does he have the audacity to claim victory?” Geagea said , accusing Nasrallah of lies and deception

“We are the biggest bloc in parliament and we will shoulder our responsibility accordingly. It turns out that we have to clarify to the people that our bloc is comprised of 19 members, whereas they have an 18-member bloc ” the LF leader said.

Won’t vote for Berri as speaker

“Any serious candidate must pledge to accurately implement parliament’s bylaws, endorse electronic voting, not to close parliament under any circumstances, and to fully return the strategic decision to the government, that’s why we won’t vote for Berri,” Geagea said.

Berri has been serving as speaker for the past 30 years.

Asked about the possibility of joining a national unity government, Geagea described such governments as “national soup governments.”

As for the deputy speaker post, Geagea stressed that the LF’s elected MP Ghassan Hasbani “enjoys all the characteristics that entitle him to be deputy speaker,” adding that the LF is “open to negotiations” but “will never bargain over its political project.”

The Iranian backed Lebanese Shiite Hezbollah militant group is the only militia that was allowed to keep its arms following the end of the civil war . It is now the most powerful group in Lebanon and acts as the state above state.

Following the May 15 elections there have been many calls for the full implementation of UN Security Council Resolutions 1559 (2004) and 1680 (2006) that require the disarmament of all armed groups in Lebanon. The illegal status of Hezbollah as a “state within the state” or “above the state” is the main grievance of all independent Lebanese. With its absolute obedience and loyalty to the Iranian regime, Hezbollah’s illegal status has been a poison for the country, according to analysts