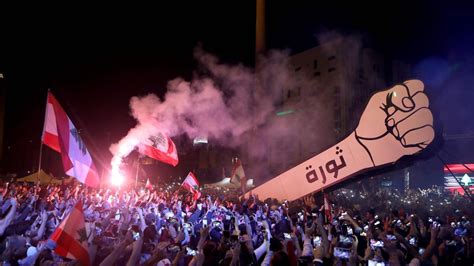 After roaming cities chanting “Shiites, Shiites,” a group of youths on scooters descended on Martyrs Square last night and burned down the “revolution fist, the symbol of Lebanon’s October 17, revolution

It was interpreted by independents as a gesture of spite by Hezbollah, after the election of Elias Jradeh and Firas Hamdan in the South III district for seats that Hezbollah and its allies had not lost in three decades.

The ministry of interior had announced the final results on Monday night. The first breakthrough had already been confirmed by early results but the second was a surprise to both parties.

The “revolution fist” had become a visual symbol of the secular protests that swept Lebanon in October 2019 and had raised hopes of democratic change.

The movement lost momentum as Lebanon’s ruling cartel of sectarian political barons bided their time and one of the sharpest economic downturns of our time muffled popular discontent.

The parliamentary elections were a first major test for those in the protest camp who chose to enter the political fray.

17 candidates who backed the 2019 protests won seats. At least twelve of them will sit in parliament for the first time.

Another major satisfaction for those described in Lebanon as the “thawra” (revolution, in Arabic) candidates, was the defeat of several reviled MPs loyal to the Syrian government of Bashar al-Assad.

Hezbollah and Amal retained all 27 parliament seats reserved for Shiite lawmakers but other allies lost ground.