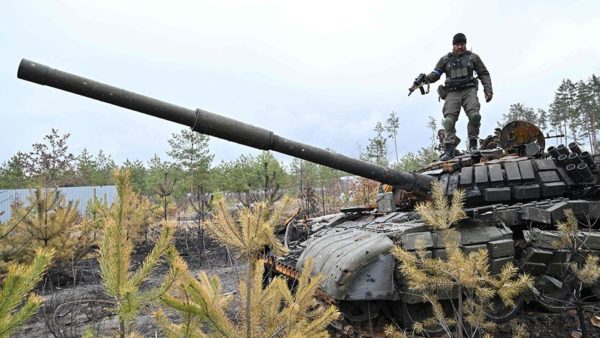 A Ukrainian soldier on a destroyed Russian tank near Kyiv/ The US reportedly supplied Ukraine with 2,000 Javelin anti-tank missiles at the start of the conflict and has since sent at least 2,000 more.Javelins can be fired so that the missile explodes on the top of a tank, where the armour is weakest, according to manufacturer Lockheed Martin. Ukraine claims that Russia lost hundreds of tanks within the first month of the Russian invasion . The invasion started on February 24
Share:

The United Kingdom’s defense ministry said that Russia has likely lost one-third of its ground combat forces in Ukraine almost three months into its war.

in a Twitter thread on Sunday, the ministry added that Moscow’s forces in the Donbas region have lost their ​​momentum and fallen behind schedule.

The ministry also said that Russia failed to achieve substantial territorial gains in the past month, as it sustained “consistently high levels of attrition.”

“Russia has now likely suffered losses of one third of the ground combat force it committed in February,” the ministry said in its tweet.

As many as 150,000 troops are believed to have been deployed by Moscow in its assault on Ukraine.

NATO said in March that as many as 40,000 Russian troops have been killed, been captured, gone missing or been taken prisoner.

The current number of Russian troops killed is debated, with Ukraine putting the total at 26,000 and Russia admitting to a little more than 2,000 deaths.

The Ministry also said in the thread that Russia was struggling to provide necessary equipment to its troops, with Ukraine continuing to put up a fight in the air and on the ground.

“Russian forces are increasingly constrained by degraded enabling capabilities, continued low morale and reduced combat effectiveness,” the ministry said in its Twitter thread. “Many of these capabilities cannot be quickly replaced or reconstituted, and are likely to continue to hinder Russian operations in Ukraine.”