Lebanon 2022 vote: Beirut does not deserve this punishment 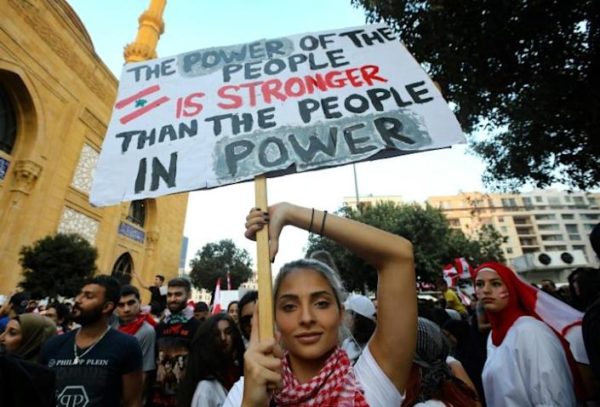 File photo of the October 2019 uprising : The corruption of the country’s leaders is one of the protesters’ main grievances. The question is will these young people that protested against corruption be able to convince their parents and loved ones to vote on Sunday may 15, 2022 for change by electing a new generation of independent leaders , or will they join their parents in committing the same crime by giving a new mandate to the same corrupt politicians . Will soon find out
Share:

In the elections, the Lebanese will will vote against their children . They will repeat a crime they committed in the previous rounds. They will give a new mandate to a man who has done nothing more than promote sectarianism on occasions that are unjustly described as national. They will vote again for a man who spread corruption in whatever cabinet portfolio he held. A man who sees nothing in the homeland but an open feast that tempts him with boundless gluttony. It is this kind of greed that increases people’s hunger. Lebanon does not deserve this punishment.

At the polling station at the Lebanese Embassy, I had mixed feelings. I was happy to see the Lebanese still willing to vote despite the success of the ruling system in killing the essence of this practice.

The previous elections did not contribute to stopping the decline that marked the past decades, which severely worsened in recent years. In previous rounds, papers thrown into the ballot boxes have paved the way to hell. Perhaps because they led to the election of men, who do not believe in the state’s logic… Men, who consider the authority an opportunity to plunder what remains of state assets and to obtain immunities that prevent any accountability or prosecution.

The best evidence is that we did not see a single perpetrator behind bars, but rather in their same official posts, lecturing on transparency and the state of institutions, while the number of those digging through piles of waste in search of a crumb of bread continued to increase.

I was saddened to believe that the Lebanese go to the polls and vote against their children. They vote in favor of a leader they consider to be the protector of the sect, confession or region in the face of the other whom they see as a source of danger to the group to which they belong.

The Lebanese go to the elections with a legacy of fears that is carried through old, but open wounds… As if those elections were a new round of a civil war that they had to stop, before they could deal a fatal blow to the opponent.

They see the polls as an opportunity to disqualify those who do not resemble them or do not submit to their dictates.

In the elections, the Lebanese will repeat a crime they committed in the previous rounds. They will give a new mandate to a man who has done nothing more than promote sectarianism on occasions that are unjustly described as national. He will vote again for a man who spread corruption in whatever cabinet portfolio he held. A man who sees nothing in the homeland but an open feast that tempts him with boundless gluttony. It is this kind of greed that increases people’s hunger.

If you talk to the Lebanese in a café or on a social occasion, they would lash out at the members of the political system. But when they return to their family, clan, tribe and sect, they forgive the corrupt for all his sins, because they consider him a reliable warrior in the declared or implicit civil war.

The journalist is tempted by stories. I have spent many years following the news of tyrants in this world. I found in them something frightening. But we must admit that those who bathed in blood and corruption did not reach the limit of plundering citizens’ deposits in banks. They did not reach the point of assassinating the capital, after climbing its branches to seize power, people and savings.

Our tyrants violated the map and did not even care when they turned the Lebanese into hopeless people scattered at the doors of embassies.

Despite these scenes, the images of the corrupt and the losers flock on the screens, awakening instincts and allowing the elections to erase crimes and pave the way for future atrocities.

Years ago, I went to see Mohsen Ibrahim, the Secretary General of the Communist Action Organization in Lebanon. I was keen to listen to his reading even if I disagreed with him sometimes.

He amusingly told me: “I’m afraid that you will be on early retirement.” I was surprised, so he explained: “I am afraid that you will soon face a situation that will not please a journalist. It is to come to the country and not feel any desire to conduct an interview or a talk with its politicians. I fear that the country has lost its meaning, its role, its vitality, and the rules that caused its existence.”

I asked him to go further. He said: “The Lebanese have committed fatal mistakes against their country… They have abandoned the language of coexistence. Lebanon was built on tolerance and coexistence. The idea of writing off someone who does not look like you, claiming possession of the whole truth, and imposing it by force on others, leaves nothing out of the country.”

I asked him to list the major mistakes. He said: “The national movement’s bet on Palestinian weapons to hasten change was a big error. Electing Bashir Gemayel to the presidency based on a regional storm unleashed by the Israeli invasion was a colossal mistake. The Mountain War was greater than Lebanon’s ability to withstand, because it weakened its immunity. The insistence of the Syrian regime on a Syrian implementation of the Taif Agreement was a wrong and dangerous act. I cannot count your faults and sins.”

He continued: “The assassination of Rafik Hariri was an internal and regional coup that targeted the man, his sect, and position, as well as Lebanon’s regional and international status. Michel Aoun’s accession to the presidency was a colossal mistake. He did not get there through the elections, but with a coup. When the position remains vacant on the condition that a particular person occupies it, the only thing left for the parliament is to sign the deal.”

Ibrahim went on to say: “Aoun arrived to power in light of his position on Hariri’s killing and all other assassinations… In light of the events of May 7. A former army chief and the most prominent Christian leader has approved the ever-weakening of the state’s logic. Perhaps he thought that he could share the equation, ignoring that Hezbollah’s project is also greater than Lebanon’s ability to bear.”

We talked for a long time with Mohsen Ibrahim, but one thing struck me. He said: “If I were you, I would form a team whose mission is to write the story of Beirut. This capital is going in difficult and dangerous directions. Beirut does not deserve this punishment.”

I visited the Lebanese polling station upon my return from Berlin, where I went to see the conditions of refugees coming from Ukraine. I had visited the city seven years ago when Germany opened its doors to the waves of Syrian refugees. The stories I listened to were painful, but I had a feeling that Ukraine might return to normal or semi-normal life with a trimmed map, before Lebanon could witness the establishment of a state worthy of the name.

I know that pure voices rose to express the longing to see a country and a homeland. But it is most likely that the corrupt system will get a new mandate. Lebanon does not deserve this punishment.