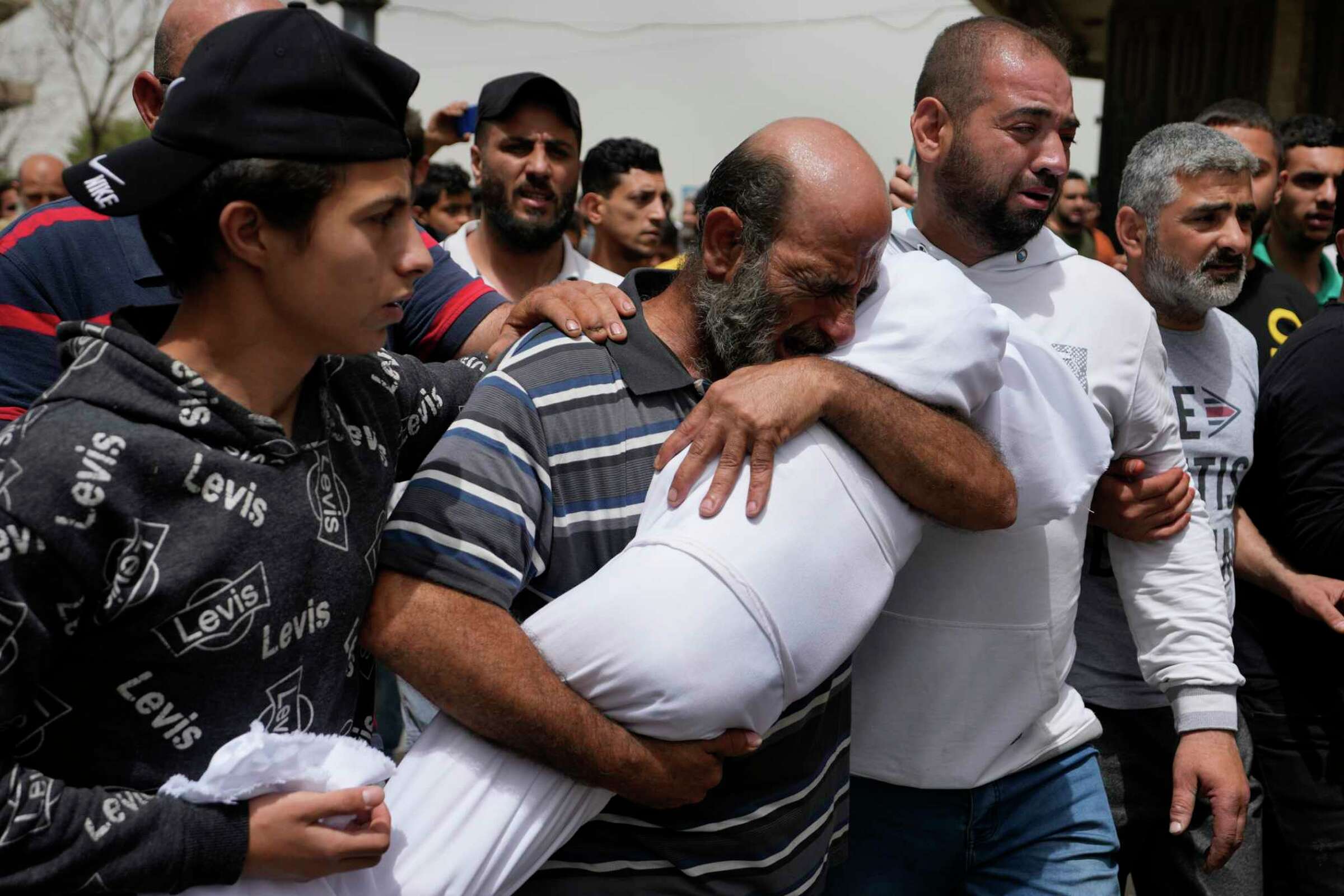 A man cries as he carries the body of a young girl during the funeral procession for seven people killed when a boat packed with migrants sunk over the weekend as the Lebanese navy tried to force it back to shore, in Tripoli, north Lebanon, Monday, April 25, 2022. The small vessel was carrying nearly 60 people, many times its capacity, when the disaster struck on Saturday night. The tragedy was the latest in a growing trend involving mostly Lebanese and Syrians trying to travel to Europe from Lebanon in search of better lives.
Share:

TRIPOLI, Lebanon – The families of migrants who died when their vessel capsized Lebanon’s northern coast held funerals in the port city of Tripoli on Monday while rescue efforts continued to find dozens still missing.

A dinghy carrying Lebanese, Syrian and Palestinian migrants sank late on Saturday off the coast near Tripoli when naval forces collided with the vessel as the smuggler tried to evade capture.

The United Nations’ refugee agency (UNHCR) estimates the dinghy was carrying 80 people at the time it capsized. The authorities say 47 people were rescued, leaving around two dozen unaccounted for.

A seventh body was found on Monday morning, the head of the Tripoli port authority told Reuters.

Lebanon’s financial meltdown has pushed more than three-quarters of the population into poverty, triggering a wave of migration, including via dangerous sea journeys to Europe on overcrowded dinghies.

In Tripoli’s Bab al-Tebbaneh neighbourhood, large crowds gathered for funeral processions of the victims, including a boy and a young man from the Dandachi family who buried their loved ones while desperate to hear the fate of another eight still missing, among them children.

Amid Dandachi, 38, said he and his wife had barely survived the shipwreck. Their children likely hadn’t.

“I tried to grab my son but I got a blanket instead. The water took him from me,” he told Reuters, his eyes red from crying.

His brother Bilal was also still waiting to know what happened to his two children and wife, whose bodies he suspects are trapped in the sunken dinghy.

In the same neighborhood, another funeral was being held for two more victims of the disaster – a young girl and a woman from the Sammak family. Men on foot and atop motorcycles fired rifles in the air in mourning as they accompanied the bodies to the cemetery.

In a press conference on Sunday, the army said naval forces had collided with the dinghy as the smuggler in charge tried to evade the military. It previously said the boat had left the coast of Lebanon illegally.

Breaking down into tears, Bilal Dandachi said Lebanon’s naval forces had not done enough to rescue those drowning.

In addition to the sunken dinghy, three boats carrying a total of 64 migrants had departed Lebanon this year, of which two were intercepted, according to UNHCR.