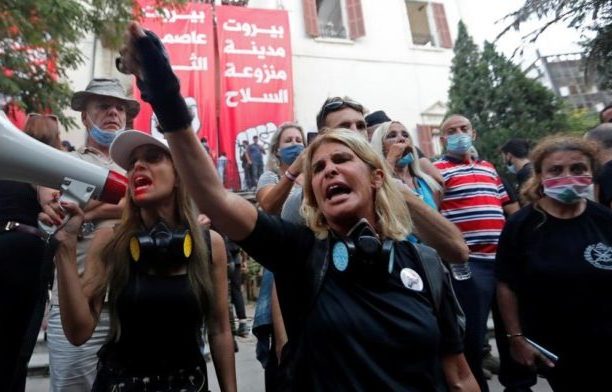 File photo of a protest against Hezbollah and iran as they chanted “Beirut is Free, Iran get out “
Share:

A furor was sparked in Lebanon recently after one of the publishers at the 63rd International Book Fair in Beirut, which opened on March 3, 2022, put up a booth devoted to Iranian General Qassem Soleimani, commander of the Qods Force of Iran’s Islamic Revolutionary Guards Corps (IRGC), who was assassinated by the U.S. in January 2020. Erected by the Dar Mawadda publisher, which is close to Hezbollah, the booth featured a life-sized poster of Soleimani, as well as smaller posters and figurines of him and of Iranian ayatollahs Khomeini and Khamenei. This display angered many Lebanese, especially on social media, who saw it as an Iranian takeover of Lebanese culture and said that the fair had become “an Iranian book fair in Beirut” or “the fair of the Iranian occupation.” Lebanese activists even tried to dismantle the booth, and one of them tried to tear down the poster, crying “Beirut is free, Iran out!” In response, other visitors attacked the activists and beat them up.   Attempts by elements close to Hezbollah and Iran to ban music performances at the fair evoked protest as well.

The display at the fair also drew criticism from Lebanese politicians opposed to Iran. Former minister Ashraf Rifi tweeted that the poster of Soleimani was “a provocation to the Lebanese, who have been burned by the flames of Iranian occupation.” Khodr Ghadban, a senior member of Walid Jumblatt’s Progressive Socialist Party, tweeted: “The poster of Soleimani at the Beirut International Book Fair – excuse me, the Iranian Fair for Persian Books in Beirut – is an Iranian cultural invasion of Beirut.”

Criticism was also expressed in Lebanese press articles. Among them was an article by Lebanese media figure ‘Omar Al-Farouk Nakhal, who slammed Iran’s attempts to “culturally occupy” Lebanon as a follow-up to its political occupation of this country.  Iran, he wrote, is trying to spread its ideology in Lebanon, which is a “culture of death,” while acting to abolish all other forms of culture, such as literature, poetry and art. This cultural war, he added, is even worse than Iran’s military wars of bloodshed and killing, and the Lebanese activists were therefore right to oppose it and cry out “Beirut is free, Iran out!”

It should be noted that this is not the first time criticism is voiced in Lebanon over the commemoration and veneration of Soleimani in the country.

The following are translated excerpts from Nakhal’s article:

“It would be an injustice to sum up the poor quality of Iran’s cultural scene by [referring only] to the incident at the Beirut International Book Fair, [an incident] in which activists were beaten and injured for daring to oppose the display of a poster of Qassem Soleimani at one of the Iranian booths while crying out ‘Beirut is free!’. The problem is much deeper than that.

“Iran’s choices are poor even when it comes to timing its cultural attacks that offend the Arab and Lebanese national sentiments. The book fair [in Beirut] has for years been providing a cultural platform for revitilizing and cultivating these sentiments through conferences, forums and dialogues that form bridges between different cultural and even political viewpoints. [But] this was before the Iranian mullahs arrived [in Lebanon] with their hammers to quash this atmosphere, while interfering in the content and messages of the fair and preventing it from holding art and music activities, which are part and parcel of any complete cultural plaform…

“The expressions of Lebanese anger and opposition to this Iranian conduct clearly reflect the war [that is currently going on] between the culture of life and the culture of death and needless killing. [This culture of death] was encapsulated in the poster of the army general [Soleimani], who belongs to the circle of bloodshed and terror and of  drowning our modern culture in the ashes of  devastated capitals and the blood of endless massacres.

“By choosing to [infiltrate] the most authentic cultural platform in Beirut, Tehran forces the Lebanese to peruse books on death and war, and imposes this content as a cultural ideology that rejects painting, sculpture [and other] plastic arts, as well as literature, poetry and prose and culture and art events. With this stern message it means to spread its cultural occupation [in Lebanon], as a followup to its political occupation… Iran could have refrained from bringing this cultural stupidity into the Beirut International Book Fair, but sadly, in all its attacks it [always] insists on exporting the worst versions of its political, social and psychological demagogy. Fortunately, the free Beirut was unwilling to accept this, and stood up, armed with words and opinions, to oppose the concepts of death, killing and needless war!

“The gravest aspect of the book fair incident was that Iran officially declared its cultural stupidity in Beirut. Conversely, the best thing that happened was that Beirut exposed this stupidity by defining it as an [Iranian] war that is much more deplorable than its wars of killing, bombings, oppression, impoverishment and starvation. Using the weapons of our voice, words and free opinion, we say: Beirut is free, Iran out!”