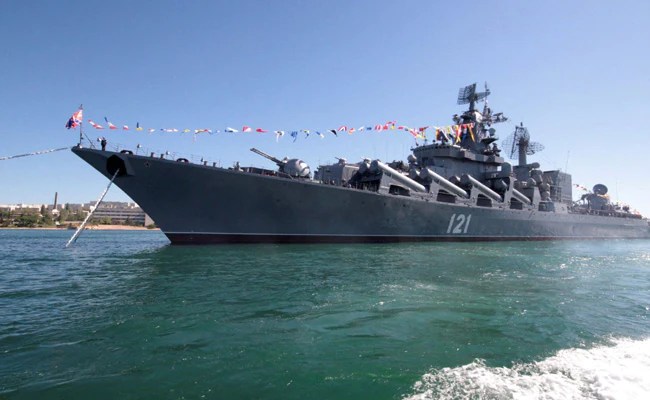 Russian state television has declared that World War III has already started after the sinking of its naval vessel Moskva in the Ukraine war. Though Russia said this was damaged after a fire, Ukraine claimed the credit of destroying the flagship vessel of Moscow’s Black Sea Fleet through its Neptune missile.
Share:

Russia’s loss of its flagship cruiser Moskva represents a dent in the operational capabilities of the Russian navy and a severe wound to Russian pride at the height of the war against Ukraine, analysts say.

The Moskva sank on Thursday after an explosion and fire that Ukraine claimed was a successful missile strike and Russia said was the result of exploding ammunition.

Until the sinking of the Moskva, nobody had good reason to doubt Russia’s supremacy in the Black Sea during the conflict with Ukraine but these calculations have now changed.

“In symbolic terms this is a great loss,” said ex-admiral Pascal Ausseur, director general of the Toulon-based Mediterranean Foundation of Strategic Studies (FMES).

The 12,000-ton ship should have been able to withstand one missile impact or more and get a fire under control, but instead went under in just 12 hours, he told AFP.

“That was not part of the plan,” Ausseur said, adding that the Moskva probably housed the command post for the naval group which now will have to find a new home.

Coming after successive setbacks for President Vladimir Putin in the 50-day-old war — including an unexpectedly weak air and land combat record — the loss of the Moskva will also have a real impact on the Russian navy’s ability to attack Ukrainian targets and keep its fellow fighters safe.

“Russia is committing the same errors at sea that they previously made on land,” said one high-ranking French officer.

The 186-metre- (610-foot-) long cruiser was equipped with 16 surface-to-surface Bazalt/Vulcan missiles used against ships as well as Fort missiles, which are navy-adapted versions of long-range S-300s, and short-range Ossa missiles.

Able to carry a crew of 680, its role was to give air cover to other ships during their operations, especially during the bombing of targets on the coast and landings, according to a Telegram post by Sergei Brachuk, a spokesman for the Odessa regional military administration.

But beyond representing a body blow to Russian military prestige, the Moskva’s loss is probably not a game changer for the Russian campaign, Western analysts said.

“The fleet has not been de-fanged,” he told AFP.

Institute for the Study of War (ISW) analysts said in a note that the loss of the Moskva would reduce Russia’s ability to conduct cruise missile strikes but was “unlikely to deal a decisive blow to Russian operations on the whole.”

“The Moskva’s main role was likely conducting precision strikes with Kalibr cruise missiles on targets in Ukrainian rear areas, including logistics centres and airfields,” they said.

The remaining force is all the more crucial for Russian capabilities as Moscow cannot dispatch a replacement for the Moskva while Turkey keeps the Bosphorus and Dardanelles straits closed to warships.

This, some analysts say, may not make a huge difference to the current phase of the war which has seen the Russian navy play a limited role.

But the ship’s loss could force Moscow to revise any plans to give the navy a bigger role in the future, said Maia Otarashvili at the Foreign Policy Research Institute.

Russian strategists have to ask the uncomfortable question whether Ukraine has more powerful defences against naval onslaught than they thought, she told AFP.

“What kind of recently-acquired anti-ship missiles does Ukraine have? And what damage can they do to the Russian navy?” she asked.

Another consequence is that it is now far less likely that Moscow would launch any amphibious operation against a Ukrainian city such as Odessa.

“Even before this… the Russians did not have air superiority, which is a sine qua non for launching an amphibious operation,” said a senior French naval officer, who asked not to be named.

“Now they are less ready than ever to do so,” added the source.

The full story of what caused the Moskva’s demise are unlikely to be known soon, as experts will need to examine its hull which is now somewhere in the depths of the Black Sea.

But it’s already clear that the disappearance of the Moskva “reveals a real vulnerability” of the Russian navy, Ausseur said.

Whether it was a direct missile hit or an explosion caused by problems on board they “indicate possible Russian deficiencies —- either poor air defenses or incredibly lax safety procedures and damage control on the Black Sea Fleet’s flagship,” the ISW analysts said.