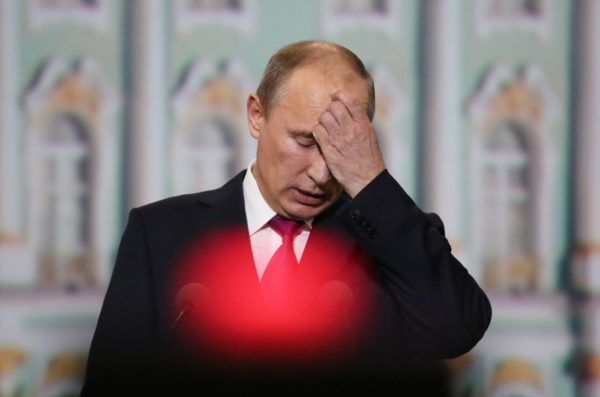 The American lawyer who charged Liberia’s Charles Taylor for war crimes has said Vladimir Putin is legally and politically “done”, and has drawn up a draft indictment that could be used to prosecute the Russian president.

David Crane, who charged Taylor with war crimes and crimes against humanity for his role in the deaths of up to 70,000 people in West Africa, has detailed similar charges against the Russian leader.

In addition, Crane has included the crime of aggression, the offence with which the leaders of Nazi Germany were charged and found guilty of, during the Nuremberg Trials.

“Vladimir Putin is done, practically, politically and legally. It’s just a matter of time,” Crane, the former chief prosecutor of the Special Court for Sierra Leone, told The Independent.

“He’s going to be indicted. And he will be an indicted war criminal, which gives him legally and politically and diplomatically, no standing any more. He has no ability to move about the world. He just has no respectability any more, like we did with Taylor, we stripped him of all his power.”

He added: “In my considered opinion, he is done politically, practically and legally. And I don’t think he fully appreciates it. But I have never seen the world come together, to see something done like this.”

In the weeks since Putin invaded Ukraine, Crane, a scholar in residence at Syracuse University College of Law, has been overseeing the efforts of a so-called Ukraine Task Force, a collaboration of law students and legal scholars, who have been working with open source information specialists to document alleged war crimes.

The group, which is more than 400 strong, and involves 12 universities and human rights groups, did similar research into alleged war crimes in Syria. Russia has denied committing war crimes, and asserted, without providing evidence, that the atrocities seen in towns such as Bucha, north of Kyiv, have been staged by Ukrainians to make Moscow look bad.

Recently, Crane and his team completed a 276-page report detailing numerous potential war crimes committed since Russia invaded Ukraine six weeks ago, along with the legal framework of accountability to charge the individuals who bear the responsibility for the crimes, with the specific violations of international law.

It includes a draft indictment against Putin, 69, and also lays out the case against four other senior Russian officials – Valery Vasilyevich Gerasimov, chief of the general staff; Nikolay Vasilyevich Bogdanovsky, a member of the general staff; Igor Olegovich Kostyukov, the director of Russian Military Intelligence; and Oleg Leonidovich Salyukov, commander-in-chief of the Russian Ground Forces.

The report says the names are “not an exhaustive list, but merely an introduction to those responsible at the highest levels”.

The report says since the invasion, Ukrainian citizens have been forced to endure kidnappings, property destruction, starvation, terror, shellings, and murder at the hands of the Russian Federation.

“As is consistent with the complex and intricate history of Ukraine, Russia once again seeks to assert its dominance and control of the territory in wanton violation of international law and Ukrainian sovereignty,” it says.

“There is no clearer violation of the laws of humanity. At its most basic elements, international law and the laws of humanity establish self-determination and self-expression of a people as fundamental rights free from infringement by foreign powers.”

Ukraine president Volodymyr Zelensky has for several weeks described what is happening to his country as war crimes, and has called for a Nuremberg-style tribunal to prosecute those responsible.

“Today, as a result of Russia’s actions in our country, in Ukraine, the most terrible war crimes we’ve seen since the end of World War Two are being committed,” he said in a virtual address to the United Nations Security Council earlier this month.

“Russian troops are deliberately destroying Ukrainian cities to ashes with artillery and air strikes. They are deliberately blocking cities, creating mass starvation. They deliberately shoot columns of civilians on the road trying to escape from the hostilities.”

At the end of February, Karim Khan, a prosecutor at the International Criminal Court in The Hague, said he had opened an initial investigation into potential war crimes.

Meanwhile, the UN Human Rights Council, based in Geneva, has established a commission of inquiry.

President Biden has called Putin a war criminal and said he should he held accountable. However the US is not a member of the International Criminal Court, after US politicians repeatedly rejected joining as they feared American citizens could be tried.

Reports suggest the Biden administration is currently trying to juggle support for Ukraine, while not becoming too supportive of any prosecution at the ICC.

Charles Taylor, now aged 74, was found guilty of 11 charges at the UN-backed special court for Sierra Leone in the Hague in 2012. He was sentenced to 50 years in jail and is currently serving that sentence at HM Prison Frankland in County Durham, England.

In addition to the thousands killed, countless others were raped or tortured, and millions of people driven from their homes. The war dragged on for more than a decade, from 1991 to 2002.

Taylor, whose actions resulted in the deaths of many thousands in a conflict that spilled over two nations, was the first former head of state convicted in an international court on war crimes charges since judges in Nuremberg convicted Karl Doenitz, an admiral who led Nazi Germany for a brief period following Adolf Hitler’s suicide.

The former Serb leader Slobodan Milosevic was also charged with war crimes, but died in his cell in 2006 before a verdict was reached. He, like Taylor, denied the charges.

Crane, 71, acknowledges the 2003 invasion of Iraq was illegal and says a case could be made against both George W Bush and Tony Blair for the hundreds of thousands of people killed. Right now, he says his focus is on Russia and Ukraine.

He claims indicting Putin would be easier than indicting the African warlord, Taylor.

He added: “Right now, in Ukraine, we have 141 nations of the United Nations – almost 80 per cent – that have done two things: one is pass a resolution condemning the invasion, [and a second resolution] condemning the human rights violations,” he says.

“We just have the political momentum.”

What does Crane say to those who point out Taylor did not have a vast arsenal of nuclear weapons, unlike Putin?

“I have been declaring that if we use the fact he’s got his thumb on the nuclear button to stop doing this, then we have two scenarios – the end of the world politically as we know it, or the end of world physically, as we know it,” he says.

“We have over a dozen strong men around the world, that are watching like crocodiles what we do to Vladimir Putin. And if we don’t do anything with Vladimir Putin, it is going to be a very dark world.”

He says he believes China would move on Taiwan, North Korea would attack South Korea, and “a whole bunch of other people do some really, really nasty things, because they realise the world doesn’t have the stomach to face down [someone who is] clearly a war criminal”.

He said: “We’re at a very, very scary historic moment, over the next couple of months.

“I’m an old sea dog, I’ve been around a long time. I have never seen the world more dangerous than right now.”