A Russian general known for bombing civilians to oversee the Ukraine war amid setbacks: U.S 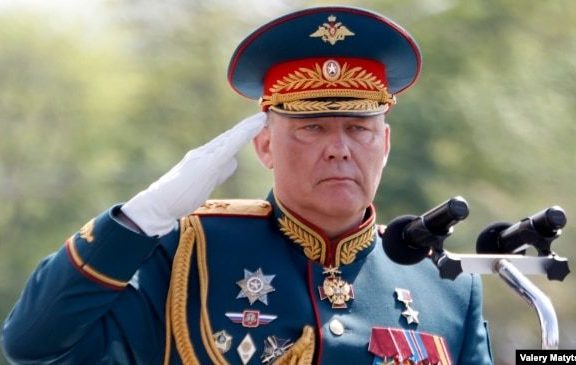 Russian General Aleksandr Dvornikov will now lead Russia’s war against Ukraine after the army suffered serious setbacks in the first six weeks of the invasion. Dvornikov served in Chechnya in the 1990s and in 2015 became the first Russian commander to lead military operations in Syria. Dvornikov has a notorious reputation for his conduct of the war in Syria, where Russia bombed civilian districts.
Share:

By 27 March 2022, Ukrainian officials said the total number of Russian generals lost in battle was confirmed at seven. Russia has not confirmed this, . 15 senior Russian commanders have been killed in the field,” according to Markiyan Lubkivsky, a spokesperson for the Ukraine Ministry of Defense. The total was later amended to 16, including five named colonels and four lieutenant colonels.

Washington – Russia has appointed a new commander to oversee the war in Ukraine as it shifts its strategy following an initial setback, the United States said.

The Kremlin has tapped Army General Aleksandr Dvornikov, who commands Russia’s forces in the southern military district, to lead the war in Ukraine, U.S. national-security adviser Jake Sullivan said in an interview with CNN on April 10.

Russia has suffered serious losses since launching its invasion of Ukraine on February 24, failing to capture key cities, including the capital, Kyiv.

Earlier this month, Russia announced it would pull back troops attacking from the north and redeploy them to the east, where the Kremlin is seeking to surround Ukrainian forces.

Dvornikov, 60, served in Chechnya in the 1990s and in 2015 became the first Russian commander to lead military operations in Syria.

Since 2016, he has overseen the southern military district, which includes Crimea, the Ukrainian peninsula seized by Russia in 2014.

Dvornikov has a notorious reputation for his conduct of the war in Syria, where Russia bombed civilian districts. Putin awarded Dvornikov the Hero of Russia medal, one of the country’s highest awards, for his work in Syria.

There has been no official confirmation from the Kremlin.

Dvornikov has been “the kind of executioner that we’ve seen prosecute these kinds of campaigns [in Chechnya and Syria], where there is an awful lot of civilian attacks, civilian destruction,” retired U.S> Lieutenant General Mark Hertling said in an interview with CNN.

Hertling said the Kremlin will push Dvornikov to “deliver success” by May 9, celebrated in Russia as a national holiday commemorating the Soviet Union’s victory over Nazi Germany.

Victory Day, as it is called, is one of Russia’s most important holidays and features a military parade.

Sullivan told CNN in an interview that the United States will continue to support Ukraine with weapons.