Lebanon politicians in no hurry to enact IMF reforms 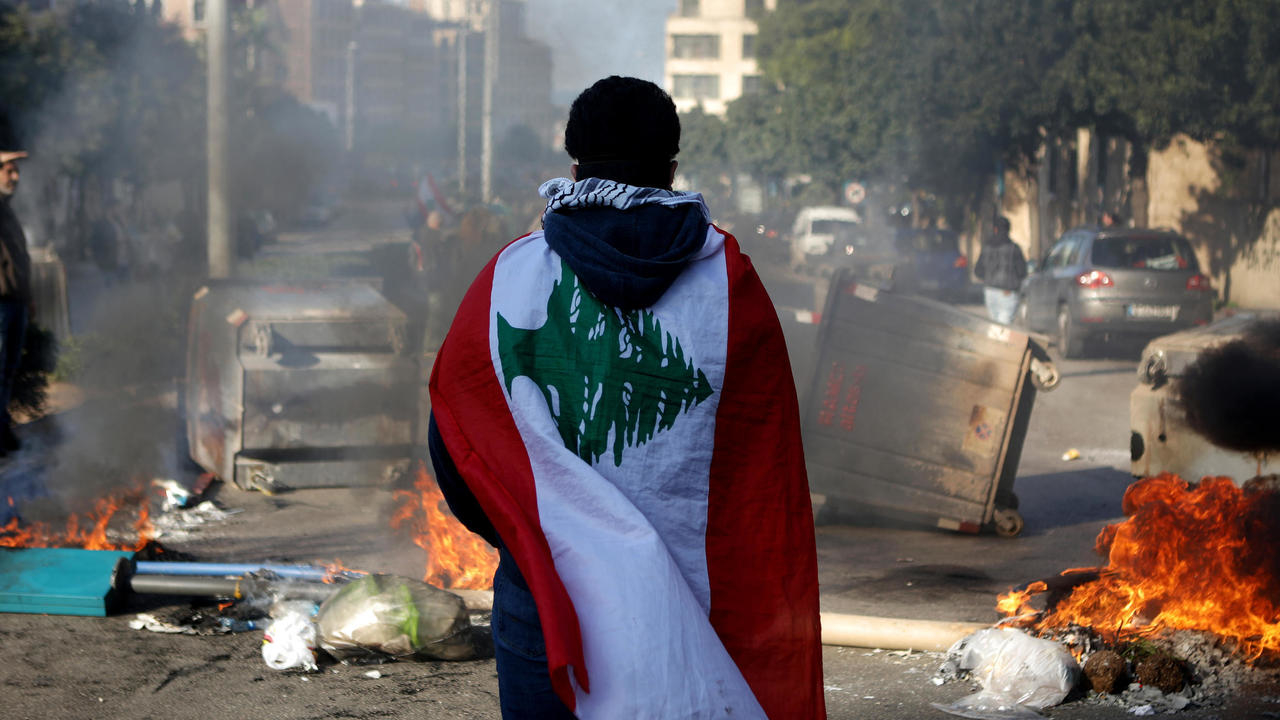 File photo of a Lebanese protester against the collapse of the Lebanese currency : Lebanon is grappling with its worst economic crisis since the 1975-1990 civil war . It reached a tentative deal with the IMF but politicians are in no hurry to enact the reforms demanded by IMF . The heavily armed Iran backed Hezbollah militia is seen as the main obstacles in the implementation of any reforms PATRICK BAZ AFP/File
Share:

BEIRUT- Lebanon won’t be able to deliver many if any reforms sought by the IMF as conditions for a funding deal before an election in May, two lawmakers said, meaning months could go by without action as that vote may well be followed by political limbo.

The IMF announced the draft funding deal on Thursday, but said its board would not decide on whether to approve it until Beirut enacts a batch of reforms including measures which ruling factions have long failed to deliver.

An IMF agreement is widely seen as the only way for Lebanon to start emerging from what the World Bank has described as one of the world’s worst ever financial collapses – and the deepest crisis since Lebanon’s 1975-90 civil war.

Many analysts have expressed renewed doubt that Lebanon’s fractious parties can deliver reforms they have long been unwilling or unable to agree to, even as Lebanese leaders have hailed the IMF deal and vowed to make it succeed.

The parliamentary election is seen as another complicating factor. After the vote, a new government must be formed, a process that usually takes many months during which the outgoing cabinet acts as caretaker and cannot take major decisions.

Nicolas Nahhas, a lawmaker and adviser to Prime Minister Najib Mikati, noted there were only a few weeks left before the election and MPs were busy campaigning.

“This wasn’t meant to be done in a few weeks and nobody serious would say it should be done in that time frame,” he said of the reforms.

“The agreement is a kind of benchmark of what should come after elections. So, after elections, parliament will start studying quickly these actions and then we shall see how we go forward.”

But the government hadn’t worked on the rest of the list, Jaber said. “They have to do their homework, send it to parliament, and I don’t think time is going to allow that,” he said.

“The big dilemma is what will happen on May 16 … If you end up with a vacuum, you have a problem.”

Before the agreement goes to the IMF board, the Fund said Lebanon had agreed to complete measures including cabinet approval of a bank restructuring that recognises and addresses large losses in the sector, while protecting small depositors and limiting their recourse to public resources.

Lebanon’s political and financial elite have been at odds over such a plan for two years, particularly the issue of how to distribute some $70 billion of losses between banks, the state, and depositors.

The governor of Lebanon’s central bank (BDL) Riad Salameh told Reuters he hoped the IMF terms would be met, that the central bank had “cooperated and facilitated” the IMF mission and that the deal would “contribute to the unification of the exchange rate.”

Lebanon’s banks association welcomed the deal but said it had not received details of the government’s plan to allocate financial sector losses and “would expect the plan to include a fair allocation of the loss on the government/BDL given the hierarchy of responsibilities.”

Banks have long said the government and central bank should bear the lion’s share of losses.

The IMF called for “limiting recourse to public resources,” in its Thursday statement announcing the draft agreement.

Goldman Sachs said the reforms were challenging, “but none more so in our view than the restructuring of the local banks”.

“The distribution of losses between the government, bank shareholders and depositors is a politically challenging question and is unlikely to be resolved easily (or quickly), in our view,” it said.

The deal was a “significant step forwards”, but more of a carrot “than a promise of near-term financial assistance”.

Mike Azar, an expert on the crisis, said the deal lacked detail and would be sold to voters as a “victory when in reality it’s a non-binding statement of intentions accompanied by nothing tangible”.

“It is unfortunate that the IMF agreed to hand the government a hollow victory just ahead of elections.”

The United States welcomed the deal and urged reforms.

The ambassadors of Kuwait and Saudi Arabia, once a major donor to Lebanon, both returned to Beirut, marking a thaw in ties strained by the Iran-backed Hezbollah’s influence in Beirut. read more

Speaking after meeting with President Michel Aoun, Maronite Patriarch Bechara Boutros Al-Rai linked the IMF deal to the return of the Gulf envoys. “This all feeds into the same place because they always said they would stand with Lebanon,” he said.

Andrew Tabler, a fellow at the Washington Institute for Near East Policy, said the developments reflected the same thing: “Concern about a Lebanese state collapse is increasing in the West and in the region.”

“I am sceptical (Lebanese politicians) will take the hard choices. They usually don’t.”

Hezbollah, a heavily armed Shi’ite group which is backed by Iran and designated a terrorist organization by Washington and which is allied with the Lebanese president is one of the main backers of Mikati’s government but not financial aid from the International Monetary Fund.

Hezbollah MP Hassan Fadlallah told Reuters in March 2020 that the group was against the type of terms typically imposed by the IMF as part of a bailout such as taxes, privatization, reducing the size of the public sector and halting subsidies.

“The opposition is not toward the Fund as an international financial institution but on the terms offered to Lebanon, because they will lead to a popular revolution,” he said.

“Our position is against this type of program and not against the Fund as an organization.”

Similarly Deputy Hezbollah leader Naim Qassem , aka , Number 2 said in March 2020 that the group was against allowing the IMF to manage the financial crisis, describing the Fund as a U.S. tool to which Lebanon would not submit.