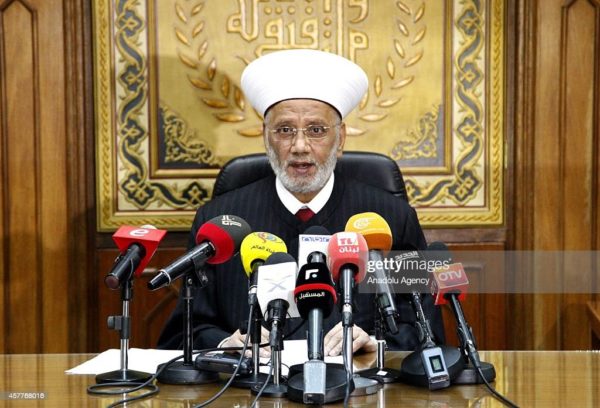 File photo of Sheikh Abdul Latif Derian, Lebanons Grand Mufti . On Friday April 1 , 2022. He blasted the corrupt rulers and urged the people to vote for change in the upcoming elections . “We are witnessing the demolition or destruction of everything that the Lebanese built in 100 years , he was quoted as telling the people ahead of Ramadan (Photo by Wissam Fanash/Anadolu Agency/Getty Images)
Share:

Derian blasted the corrupt rulers and urged the voters to participate in upcoming parliamentary elections stressing that some candidates are motivated and willing to create change,”

“Any alternative produced by the elections is better than the coercive and corrupt authority, and some candidates are motivated and willing to create change,” he said.

Addressing the Lebanese people on Friday ahead of Ramadan, Derian criticized what he called a “corrupt clique” in power.

He accused them of demolishing “everything that the Lebanese built in 100 years, including the judiciary and the banking sector, as well as Lebanon’s relations with Arab and international countries.”

Derian criticized the “desperate attempts to ruin Lebanon’s identity, belonging and constitution, and destroy the principle of separation of powers in favor of personal feuds and miserable political interests.”

He expressed concern about the military losing stature and power in favor of militias that follow orders from abroad, a possible reference to the Iranian backed Hezbollah militant group, whose leader Hassan Nasrallah pledged allegiance to Iran and its supreme leader , describing his role as a soldier in Iran’s “Wilayat al Faqih”

Derian also addressed the issue of food security, and said there is a big difference between hunger and starvation.

“People feel hungry during Ramadan because they choose to fast, but starvation is the result of failed policies, corrupt rulers, complete disregard for human rights, and stealing people’s money.

“With your corruption, you have turned Lebanon into a country that suffers from starvation, fear and deprivation, while you keep devouring the money you have unlawfully taken.”

He added that “the Lebanese have naturally lost confidence in the corrupt people in power,” and he called for Lebanon to be given a chance to “breathe.”

Derian called for fraternal relations with other Arab countries, and urged the Lebanese to “stand by one another and rally around charitable institutions.”

He noted that “parties abroad that want to help Lebanon will make sure that none of the aid falls into the hands of the corrupt official authorities.

“We, the Lebanese, have to take care of our charitable and humanitarian institutions, as they are the remaining pillar of stability and continuity, especially as the needs have increased and the capabilities diminished.”