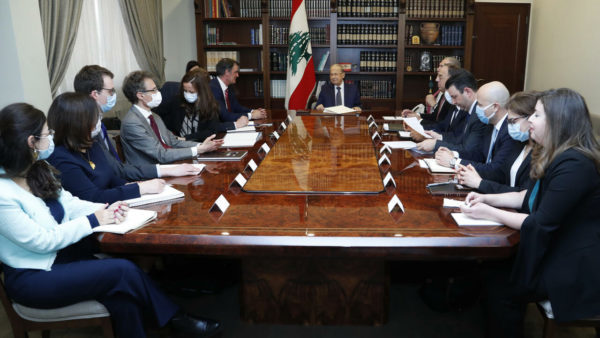 An International Monetary Fund (IMF) delegation kicked off talks in Beirut Wednesday as part of a two-week mission aimed at securing progress towards funding for crisis-hit Lebanon. ADVERTISING

The government is hoping to secure a rescue package to exit a deep financial crisis that started in 2019 and has seen most of the country’s population fall into poverty.

“We hope that a preliminary deal will be reached after two weeks of discussions,” Deputy Prime Minister Saade Chami, who heads Lebanon’s delegation to the IMF, told AFP.

Lebanon defaulted on its foreign debt for the first time in 2020.

The IMF, which sent a technical team to Lebanon last month, has noted progress towards an aid programme but said more work was needed on the reform front, nearly two years after initial talks between the two parties.

On Wednesday, the IMF delegation, headed by Ernesto Ramirez, met with President Michel Aoun to discuss progress in the talks, a statement from the presidency said.

Even if Lebanon and the IMF reach an initial agreement this month, implementation will be a key challenge, said financial analyst Mike Azar.

Parliament, which must approve the aid programme, could opt to block a deal in the same way it recently rejected a draft capital control law widely viewed as a prelude to an IMF agreement, Azar said.

The long-delayed capital control law, strongly recommended by the IMF, was supposed to be reviewed by parliament this week after it was drafted by the government.

But it was rejected by parliamentary committees before even being put to a vote.

“Reforms will have to be passed and executed before the IMF seeks Board approval for the financing package,” Azar told AFP.

Lebanon’s ruling elite, beset by internal rifts that have repeatedly left the country without a government, has yet to reach consensus on a way out of the crisis.

Prime Minister Najib Mikati had pleaded with members of parliament to fully cooperate with the government toward finding a solution, calling IMF talks an “obligatory path”.

“The political will to pass a comprehensive… reform package may not be there,” Azar said, warning that any deal agreed in principle this month could be rendered meaningless.