“Where is the beef”? It is a luxury in Lebanon where 80% live in poverty 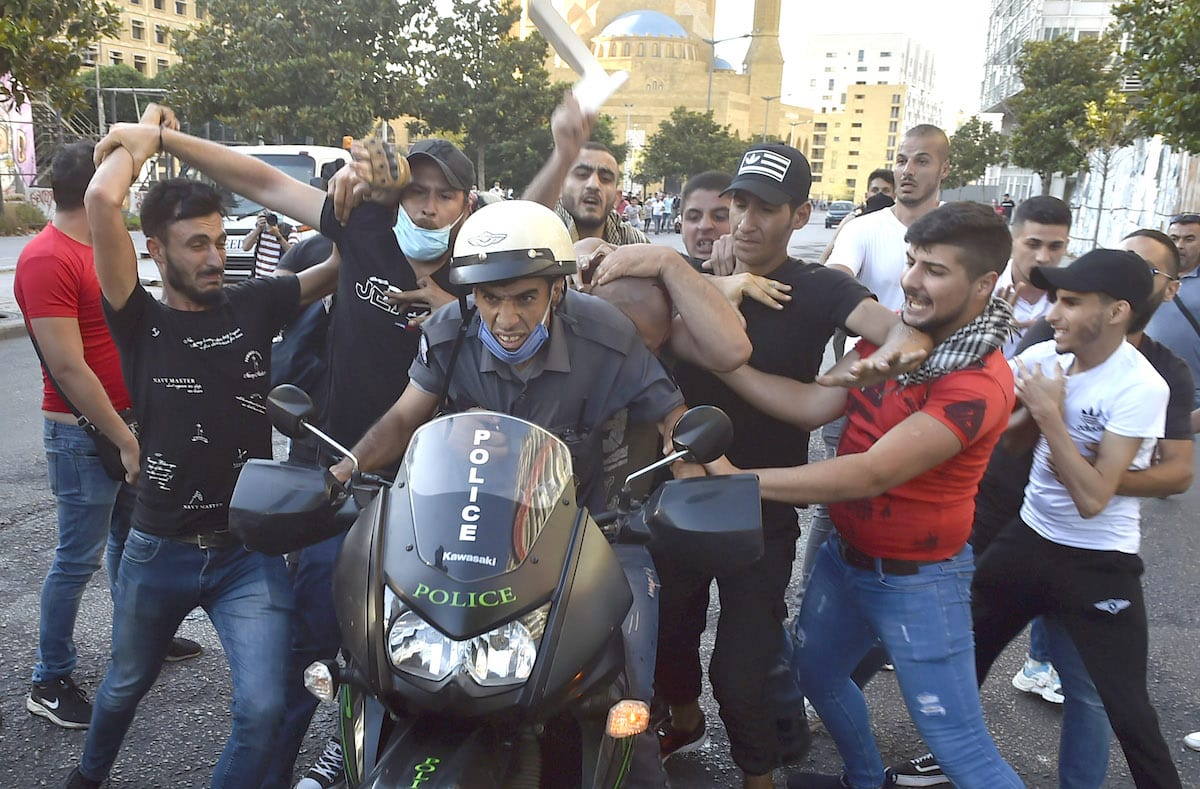 File photo of anti-government protesters who are shown attacking a policeman during a protest against the power cuts, the high cost of living, and the low purchasing power of the Lebanese currency, outside of the United Nations Economic and Social Commission for Western Asia (ESCWA) building in Beirut, Lebanon, on June 06, 2021. 80% of the Lebanese now live in poverty and can no longer afford the kind of food they used to enjoy ( Houssam Shbaro – Anadolu Agency )
Share:

Beirut (AFP) – Layla Ibrahim has cut down on her daily meat consumption, not because of a health fad but forced by Lebanon’s bruising economic crisis.

“I used to eat a slice of meat, chicken or fish every day, but the prices of these items have become ridiculous,” the 44-year-old mother of two told AFP.

“Out of necessity and not choice, I have almost become a vegetarian,” she added.

Lebanon is grappling with an unprecedented financial crisis that the World Bank says is of a scale usually associated with full-scale wars.

The currency has lost more than 90 percent of its value on the black market, more than 80 percent of the population lives in poverty, and prices have skyrocketed.

The price of imported red meat has increased fivefold, with some cuts costing more than the monthly minimum wage of 675,000 Lebanese pounds ($33) per kg .

As a result, dietary habits have changed and plant-based dishes — a popular part of Lebanon’s Mediterranean cuisine — are now a main course in many households.

For Ibrahim and her family, meat is served only once a week and even then in small portions.

“Even the Sunday family barbecue has been scrapped.”

Nabil Fahed, head of the syndicate of supermarket owners, said customers are opting for poultry or grain as a cheaper alternative.

Chicken is almost five times cheaper than beef and sells at around 120,000 pounds ($5) a kilo.

The demand for red meat has plummeted since the government lifted subsidies on certain food imports in March 2021, Fahed said.

Sales dropped by around 70 percent in large supermarkets and the decline is even steeper in popular markets frequented by people with low incomes, he said.

Nancy Awada, a food inspector working with the Beirut municipality, has noticed a change in supply.

“The quantities of meat stored in a butcher’s refrigerator… today are a quarter or a third of what they used to be,” she said.

“Instead of slaughtering two or three calves a day, butchers make do with only one.”

Lebanon’s cash-strapped government is struggling to afford fuel imports to feed its power plants, causing outages that last up to 22 hours a day in most parts of the country.

To safeguard stocks, traders and distributors have to pay for expensive generator subscriptions to power refrigerators, said meat importer Imad Harouk of the Fed Distribution company.

A spike in transport costs due to the lifting of fuel subsidies last year has also raised the overall meat bill, Harouk told AFP.

Adjusting to demand, importers have sized down on stocks.

“Lebanon used to import 70 containers of frozen meat every month, but now the number is nearly 40,” Harouk said.

“Demand has dropped for meat shawarma sandwiches, with consumers leaning more towards chicken,” he said.

This trend has played out at the Kababji grill house, a restaurant famous for its wide selection of meat skewers.

“The economic crisis combined with the Covid-19 pandemic has caused a significant decline in overall sales, especially of meat-based dishes,” said Hala Jebai, the manager of Kababji’s customer service department.

“The high-quality meat that we offer is imported and paid for in dollars… which has led to a significant decline in demand,” she added.

The 62-year-old used to put in a standard order of one kilo (two pounds) before the crisis but now he asks for an amount worth just under $2.

“A lot of consumers are buying limited quantities based on what they can afford,” Harouk, the meat importer, told AFP.

“Even the well-off can’t consume the way they used to.”