Over 850 detained in anti-war protests across Russia on Sunday, updates 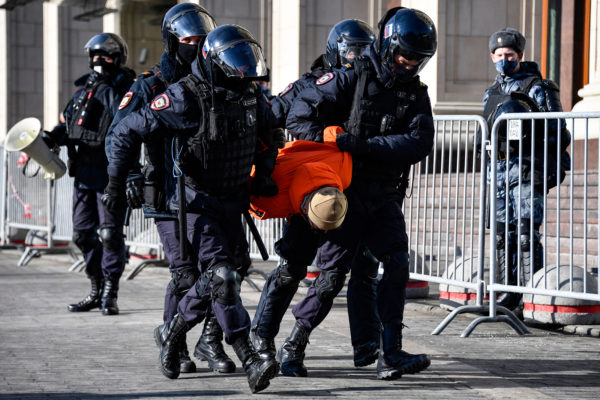 Police officers detain a man during a protest against Russian military action in Ukraine, in Manezhnaya Square in central Moscow on March 13, 2022. (Photo by AFP) (Photo by -/AFP via Getty Images)
Share:

More than 850 people were detained in anti-war protests across 37 Russian cities on Sunday, according to OVD-Info, an independent human rights protest-monitoring group.

Russian security forces are no longer detaining just protesters, but are also trying to identify “unreliable” people among passers-by in places where anti-war protests were announced, the group says.

According to the group, the total number of people detained for disagreeing with Russian aggression since its invasion of Ukraine is approaching 15,000.

A school in the village of Zelenogai, about 10 miles (16 kilometers) east of Mykolaiv, has been demolished by a Russian military strike, Mykolaiv regional administrator Vitali Kim said.

Video and photos from the scene, which have been geolocated and their authenticity verified, show much of the school has been reduced to rubble. Kim confirmed that a school in the Mykolaiv region was hit and posted the video and photos online.

“Some people got under the rubble and we are evacuating them,” Kim said.

Firefighters and rescue services are seen in the video.

Later on Saturday evening, Kim said that the military strike left several people either dead or in critical condition.