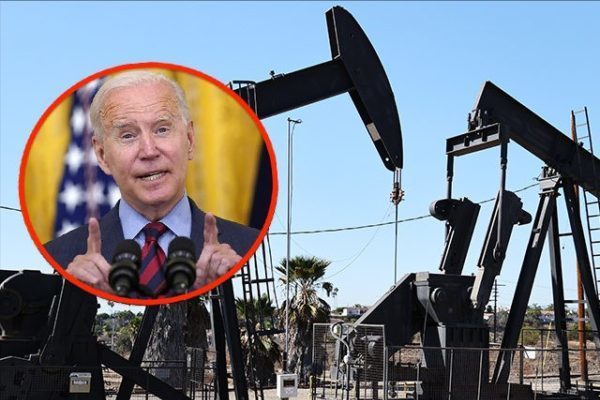 President Joe Biden announced a ban on the import of Russian energy, leaving markets in a scramble to find new barrels of oil. “We’re banning all imports of Russian oil and gas and energy,” Biden said in a televised address. “We will not be a part of subsidizing Putin’s war.” The heavy crude oil from Russia could be replaced with Venezuela heavy crude
Share:

In another sign of the dramatic overhaul in the world order, the U.S. government has reengaged with Venezuela’s President Nicolás Maduro to potentially undo oil sanctions on the Latin American nation.

In an address on state television, Maduro called a weekend meeting at the Miraflores presidential palace with U.S. officials “respectful, cordial, and very diplomatic.” He said the two sides “decided to work on an agenda looking forward,” and that the topics were “of maximum interest to Venezuela and the world.”

Venezuela has the largest oil reserves on earth, but decades of mismanagement and underinvestment added to an almost decade-long recession have left its oil industry in tatters.

In early 2019, sanctions against state oil firm Petróleos de Venezuela SA (PDVSA) prohibited the purchase of Venezuelan crude by U.S. counterparts. At the time, Venezuela had been shipping about 500,000-600,000 b/d to the United States. The sanctions also cut off about 100,000 b/d of U.S. diluent supply into Venezuela, used for blending its extra-heavy crude oil.

On Tuesday, President Biden announced a ban on the import of Russian energy, leaving markets in a scramble to find new barrels of oil. “We’re banning all imports of Russian oil and gas and energy,” Biden said in a televised address. “We will not be a part of subsidizing Putin’s war.”

The U.S. imports about 200,000 b/d of crude and 500,000 b/d of petroleum products from Russia into its refineries, according to Rystad Energy.

Monaldi told NGI’s Mexico GPI that “Venezuela won’t make a difference in the world market right now, but it might make a difference to the refiners in the Gulf Coast that need heavy oil and could benefit from some oil production that could be rerouted from what currently goes to China.”

At the CERAWeek by S&P Global conference in Houston, oil executives this week expressed extreme concern over the state of global energy.

The United Kingdom also announced a ban on Russian oil and gas on Tuesday and there is growing concern that Russia and its massive stores of energy could effectively be shut out of the market.

In a note on Wednesday, Goldman Sachs Commodities Research analysts said that, “Given Russia’s key role in global energy supply, the global economy could soon be faced with one of the largest energy supply shocks ever.”

Key to a global supply response will be additional production from OPEC nations, but also the “potential lift of sanctions on oil imports from Iran and Venezuela.” The analysts see Venezuela production potentially ramping up by 500,000 b/d in the next six months. But, they warn, this is “limited by underlying declines and underinvestment.”

ClearView Energy Partners LLC analysts echoed this sentiment and said that, “Unlike Iranian inventories readied for shipment, Venezuelan barrels may not be able to surge to the rescue.”

Monaldi sees Venezuelan production potentially reaching 1 million b/d in the next six months, from about 750,000 b/d today. “Any more than that will require significant investment, and Venezuela hasn’t had an oil rig operating for the last 18-20 months.”

The process to get Venezuelan oil into the United States could also be long and difficult, analysts said. There could be political backlash in both nations. Monaldi said it would be a “complex bargain.”

President Maduro said on state television he was willing to start talks with the opposition. U.S. demands are said to include the release from jail of six former executives of PDVA’s refining subsidiary, Citgo. On Tuesday night, the White House said Venezuela had released two jailed Americans, including Texas oil executive Gustavo Cardenas of Houston headquartered Citgo.

Senator Bob Menendez (D-NJ), chair of the Senate Foreign Relations Committee, said in a statement that, “Nicolás Maduro is a cancer to our hemisphere and we should not breathe new life into his reign of torture and murder.”

Maduro, meanwhile, has been a vociferous supporter of Russian President Vladimir Putin’s decision to invade Ukraine.

“Venezuela’s ties to Russia is a complex issue,” Monaldi said. “I don’t know if Venezuela can have it both ways. Key actors such as the military are very close to the Russians. It’s not that easy for them to align with the U.S., so I don’t expect a full realignment.

“But I don’t discard minimalistic steps, and then if they build trust… In the longer term if this crisis has more permanent implications it could help to add more output from the Western hemisphere,” he said.