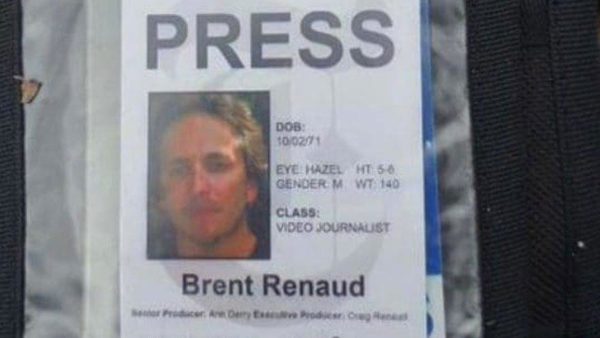 Slain journalist was identified by Ukrainian police as Brent Renaud, a 51-year-old US citizen , media correspondent and filmmaker . He was killed by the invading Russian forces near Kyiv. Ukrainian Foreign Ministry spokesperson Oleg Nikolenko urged the international media organizations to “condemn the barbaric killing of civilians in Ukraine and to demand an immediate cessation of hostilities by Russia. “
Share:

An American journalist was killed and another wounded by Russian forces in Irpen near the Ukrainian capital of Kyiv, the Kyiv Region Police head said Sunday.

The killed journalist was identified by Ukrainian police as Brent Renaud, a 51-year-old journalist, filmmaker and US citizen. While Ukrainian authorities initially identified Renaud as a The New York Times correspondent, he was not in Ukraine reporting on behalf of The Times.

“We are deeply saddened to hear of Brent Renaud’s death. Brent was a talented filmmaker who had contributed to The New York Times over the years,” read a statement from the outlet. “Though he had contributed to The Times in the past (most recently in 2015), he was not on assignment for any desk at The Times in Ukraine. Early reports that he worked for Times circulated because he was wearing a Times press badge that had been issued for an assignment many years ago.”

“Today American journalist and filmmaker Brent Renaud was killed by the Russian army near Kyiv. Another journalist was wounded,” tweeted Ukrainian Foreign Ministry spokesperson Oleg Nikolenko. “We urge international media organizations to condemn the barbaric killing of civilians in Ukraine and to demand an immediate cessation of hostilities by Russia. “

“Of course, the profession of a journalist is a risk, but US citizen Brent Renaud paid his life for trying to highlight the aggressor’s ingenuity, cruelty and ruthlessness,” Kyiv Region Police chief Andriy Nebytov said on Facebook.

Renaud was an award-winning U.S. filmmaker and journalist. He covered wars in Iraq and Afghanistan, political turmoil in northern Africa, cartel violence in Mexico, and the 2010 Haiti earthquake, to name a few. He was covering the war in Ukraine by Russia when he was shot to death.

His work appeared in numerous publications, including The New York Times, The Boston Globe, HBO, NBC, and AI Jazeera. Throughout his career, he won several accolades including Peabody and DuPont awards.

According to Ukrainian law enforcement. He was shot in the neck by the Russian forces

Together with fellow journalist Juan Arredondo, who was also injured in the attack, Renaud was reporting on the Russian invasion of Ukraine. The two were shot at in Irpin, a suburb located just north of Kyiv, while they were on their way to film people leaving Kyiv.

Renaud was from Arkansas, United States of America. According to Renaud’s official ID card, he was born on October 2, 1971