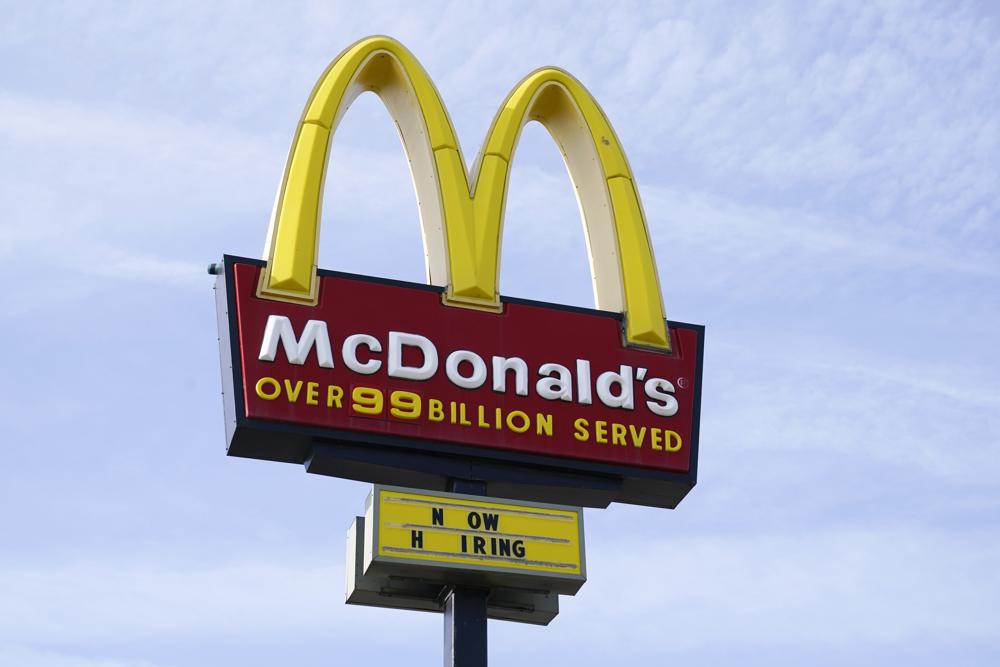 FILE – A sign is displayed outside a McDonald’s restaurant, Tuesday, April 27, 2021, in Des Moines, Iowa. McDonald’s said Tuesday, March 8, 2022, it is temporarily closing all of its 850 restaurants in Russia in response to the country’s invasion of Ukraine. The burger giant said it will continue paying its 62,000 employees in Russia. (AP Photo/Charlie Neibergall, File) ﻿
Share:

DETROIT (AP) — McDonald’s, Starbucks, Coca-Cola, PepsiCo and General Electric __ ubiquitous global brands and symbols of U.S. corporate might __ all announced Tuesday they were temporarily suspending their business in Russia in response to the country’s invasion of Ukraine.

“Our values mean we cannot ignore the needless human suffering unfolding in Ukraine,” McDonald’s President and CEO Chris Kempczinski said in an open letter to employees.

The Chicago-based burger giant said it will temporarily close 850 stores but continue paying its 62,000 employees in Russia “who have poured their heart and soul into our McDonald’s brand.”

Kempczinski said it’s impossible to know when the company will be able to reopen its stores.

“The situation is extraordinarily challenging for a global brand like ours, and there are many considerations,” Kempczinski wrote in the letter. McDonald’s works with hundreds of Russian suppliers, for example, and serves millions of customers each day.

Last Friday, Starbucks had said that it was donating profits from its 130 Russian stores __ owned and operated by Kuwait-based franchisee Alshaya Group __ to humanitarian relief efforts in Ukraine. But on Tuesday, the company changed course and said it would temporarily close those stores. Alshaya Group will continue to pay Starbucks’ 2,000 Russian employees, Starbucks President and CEO Kevin Johnson said in an open letter to employees.

“Through this dynamic situation, we will continue to make decisions that are true to our mission and values and communicate with transparency,” Johnson wrote.

PepsiCo and General Electric both announced partial shutdowns of their Russian business.

Pepsi, based in Purchase, New York, said it will suspend sales of beverages in Russia. It will also suspend any capital investments and promotional activities.

But the company said it will continue to produce milk, baby formula and baby food, in part to continue supporting its 20,000 Russian employees and the 40,000 Russian agricultural workers who are part of its supply chain.

“Now more than ever we must stay true to the humanitarian aspect of our business,” PepsiCo CEO Ramon Laguarta said in an email to employees.

General Electric also said in a Twitter post that it was partially suspending its operations in Russia. GE said two exceptions would be essential medical equipment and support for existing power services in Russia.