More misery awaits Lebanon after exodus of its most educated citizens 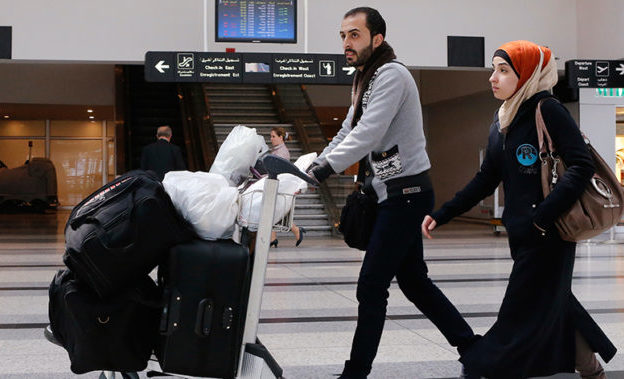 Emigration of Lebanese professionals is on the rise . After the cabinet fiasco, Lebanon could empty itself of its middle class to end up with an oligarchy clinging on to power and the impoverishment of those who stay behind.”
Share:

Lana Noura is only 18 and a first-year computer science student at the prestigious American University in Beirut. But like many of her classmates, she already knows she wants to leave Lebanon once she has finished her course. “I will leave for work and hopefully take my parents with me,” she said. “Anywhere would be fine, but I would prefer somewhere in the Middle East. It’s for a good life. Here it’s not stable and you never know what will happen next.”

Jad Masry, a fifth-year medical student, also plans to leave, either for Germany or America. “It will be a better income, better education and better lifestyle,” he said. “The politicians in Lebanon cannot bring us a good future because they are corrupt.”

Lebanon has always had a huge diaspora after waves of emigration over the past two centuries, particularly as a result of the 15-year civil war that ended in 1990. Now, once again, as the country sinks deeper into economic meltdown, it faces a new exodus of its brightest and best-educated citizens.

Forced to grapple daily with hyperinflation, power cuts and shortages, many Lebanese have little confidence in the future. They have lost hope their fractious leaders will take action to reverse the country’s catastrophic financial collapse. Two years after the onset of a fiscal and banking crisis, little has been done to salvage the sinking economy in what the World Bank has called a “deliberate depression . . . orchestrated by an elite that has captured the state”.

“Lebanon has yet to identify, least of all embark upon, a credible path toward economic and financial recovery,” said the World Bank in December. “In consequence, highly skilled labour is increasingly likely to take up potential opportunities abroad, constituting a permanent social and economic loss for the country.” Lebanese people seeking jobs abroad include formerly well-paid professionals whose dollar accounts are blocked by the banks and young people who see no future in their home country. About 40 per cent of the population of almost 7m is considering emigrating, according to a recent survey commissioned by Konrad-Adenauer-Stiftung, a German think-tank. About 40 per cent of Lebanon’s doctors have already left for the Gulf or the west, either permanently or temporarily, according to the World Bank. At least 10,000 teachers have also found jobs abroad, according to some estimates, cited by the World Bank. The Lebanese lira has lost more than 95 per cent of its value against the dollar over the past two years, rendering teachers’ salaries almost worthless.

The German survey found that 40 per cent of Lebanese have had to cut down on food and a third are unable to afford their medication. Three-quarters of the population has been plunged into what the UN terms “multidimensional poverty” — a measure that includes access to health, education and public utilities in addition to income poverty.

The debilitating impact of the brain drain is already being felt in the health sector. Charaf Abou Charaf, head of the doctors’ union, said the main university hospitals in Beirut, which employed highly skilled specialists, had each lost between 100 and 150 doctors. “It means some specialised procedures cannot be carried out,” he added. “And it is not just a question of doctors, there is also a shortage of supplies and medicines. If the political and financial situations are not quickly rectified, the health situation will be in danger.” At the American University of Beirut Medical Center, Mona Nasrallah, an endocrinologist, said three out of the 10 doctors in her department had gone abroad. “The clinical, teaching and administrative load has increased, taking time away from my research,” she added. “It is also more complicated now because you can’t refer patients to certain specialists if they are no longer there. You have to work to find suitable replacements.”

Nasrallah said the government had made no effort to retain doctors, but individual hospitals were trying to find ways to keep them by paying a proportion of their salaries in “fresh dollars” — a term that refers to money transferred into the country from abroad or to new cash that enters the system that is exempt from restrictions on bank accounts. “It’s not a lot of money, but enough to get by on,” she added. “If you have already made up your mind to go, it won’t make you stay. But if you want to stay, it will keep you afloat.”

Experts warn of the long-term impact of the mass emigration of the skilled. Saroj Kumar Jha, World Bank Mashreq regional director, said that the quality of education in Lebanon had been declining even before the crisis and the departure of highly skilled doctors and teachers meant there was not the flow of “human capital” to replace them. “The Lebanese children born in today’s times when they become 18 years old, their productivity will be only 48 per cent of their potential, which means that there is structurally something wrong with the quality of learning in the schools.” Nasser Saidi, a Lebanese economist and former minister, also warned of the dangers of the depletion of Lebanon’s “stock of human capital”. “When you have skilled people working alongside unskilled people, they help them improve because they teach them,” he said. “If the skilled people and the educated people are not there, then we just have misery.”

Such long-term considerations, however, are not a priority for those grappling with the everyday realities of a worthless currency, lengthy power cuts and expensive food and fuel. “If I knew it was going to be like this, I would have left a long time ago,” said Zaher Nashabe, a fourth-year chemistry student who plans to go to the US. “I will work there for a few years, get some financial stability and maybe return. But if my family come too and I find work, I will stay there.”