Will Ukraine join the EU? 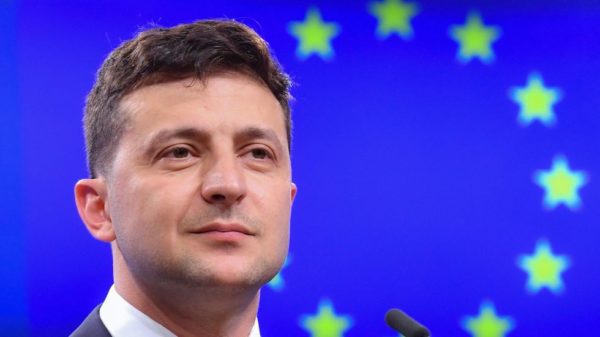 Ukrainian President Volodymyr Zelensky formally signed the nation’s application to join the European Union Monday after asking the bloc to move swiftly to admit Ukraine as a member—here’s what the process of joining the EU could look like as European leaders debate admitting Ukraine.

Zelensky signed the application after appealing to the EU in a video Monday that called for Ukraine’s “immediate accession under a new special procedure.”

The typical pathway for a country to join the EU requires prospective countries to first fulfill set criteria—like establishing a free-market economy and accepting EU legislation and the euro—and then undergo lengthy negotiations, with Bloomberg noting it took Croatia, the most recent EU member, ten years to join.

All member states would have to approve Ukraine joining, which is something that might not happen, as European Council President Charles Michel told Euronews there are “different opinions and sensitivities within the EU” regarding Ukraine’s membership.

Leaders in Slovakia, Slovenia and the Czech Republic have pushed for the EU to create a “totally new track” that would allow Ukraine to swiftly join the EU, but EU leaders so far don’t seem to be on board—European Commission President Ursula von der Leyen told Euronews Saturday that “we want [Ukraine] in” the EU, but suggested the membership process would happen “over time.”

Joining the EU could immediately help Ukraine militarily, as EU members are bound by a mutual defense clause that requires other members to aid a country if it’s “the victim of armed aggression on its territory.”

Admission to the bloc would also benefit Ukraine economically and give them additional benefits, like Ukrainians having free movement throughout the bloc and being granted the variety of rights afforded to EU citizens.

Even the EU just moving forward with Ukraine’s application could be beneficial, former European leaders noted in an op-ed through the Atlantic Council, saying it would be “a bold, courageous and meaningful political statement” and send a message to Moscow.

WHAT TO WATCH FOR

The European Council is holding a summit on March 10 and 11, in which it’s likely to discuss Ukraine’s potential membership, a senior EU official told Reuters Monday.

Joining the EU has been a longstanding goal for Ukraine, with Zelensky telling Politico in 2020 that “Ukrainians want to live in European Ukraine.” The country already has an association agreement with the EU in place that allows for free trade and “promotes deeper political ties,” but Reuters notes its efforts to join the EU have been stymied by Russia’s opposition to Ukraine becoming a member. The bloc has previously shied away from membership discussions “so as not to antagonize Moscow,” Reuters reports—something that’s now less of an issue as the EU and the West move to punish Russia for its invasion of Ukraine. The EU has already imposed significant sanctions on Russia and lent its support to Ukraine through other measures, such as funding and delivering weapons to Ukraine for the first time in the bloc’s history and directing members to give Ukrainian refugees temporary asylum for up to three years. The Kremlin has hit back at the EU and its “hostile” actions, criticizing its move to arm Ukraine with weapons Monday as “dangerous and destabilizing.”