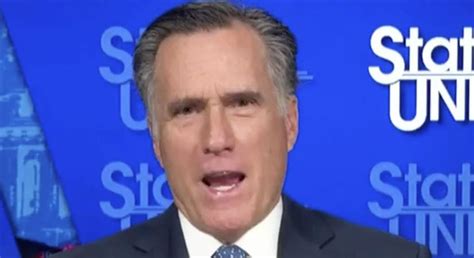 US Sen. Mitt Romney on Sunday praised Ukrainian President Volodymyr Zelenskyy a “world hero” and denounced Vladimir Putin as “evil ” and “small, feral-eyed” man and referred to fellow Republicans who attended a conference where the Russian leader was cheered as “morons.”
Share:

Calling Ukrainian President Volodymyr Zelenskyy a “world hero” for his efforts to defend his country, Sen. Mitt Romney on Sunday denounced Vladimir Putin as “small, feral-eyed” man and referred to fellow Republicans who attended a conference where the Russian leader was cheered as “morons.”

Appearing on CNN’s “State of the Union,” the Utah Republican said the “extraordinary” courage of the Ukrainian people has galvanized the spirit of the entire world, attributing much of it to “real leadership.”

“You’ve seen both physical and moral leadership by Zelenskyy and the people around him,” Romney said. “The contrast between that and the puny nature of Vladimir Putin’s tyranny has really helped people understand the difference between good and evil.”

Romney called it one of the “greatest demonstrations of good versus evil that we’ve seen during our lifetimes.”

“Look at Vladimir Putin. Here he is behind this huge table in this big white room. It looks like a mausoleum where honesty and honor have gone to die,” he said “Contrast that with Zelenskyy, with his courage, his passion, with his true leadership. This is remarkable, and it’s having an impact.”

I join the world in awe of true heroes: the courageous President Zelensky, the brave Ukrainian soldiers, the citizen armies, the mothers cradling frightened children, and the journalists risking their lives to bring us truth. God bless them and God bless us to never forget.

Fuentes led the audience in cheering for Putin. “Can we give a round of applause for Russia?” he asked attendees, some of whom chanted the Russian leader’s name.

Rep. Liz Cheney, R-Wyo., took to Twitter to condemn Greene and Gosar for participating in the conference, while also criticizing Republican leaders for failing to quickly “renounce” their actions.

All Americans should renounce this garbage and reject the Putin wing of the GOP now. pic.twitter.com/6fgpV6ohZ8

“There’s no place in either party for this white nationalism or racism. It’s simply wrong. … It’s evil as well,” he said.

Romney said he doesn’t know Greene or Gosar but was reminded of a line from “Butch Cassidy and the Sundance Kid” where one character says, “‘Morons, I’ve got morons on my team.’ And I have to think that anybody that would sit down with white nationalists and speak at the conference was certainly missing a few IQ points.”

Asked further about the pro-Putin wing of the Republican Party, Romney said many of them are “changing their stripes” as they see the response of the world and the political response in the U.S.

“But how anybody, how anybody in this country which loves freedom could side with Vladimir Putin — which is an oppressor, a dictator, he kills people, he imprisons his political opponents, he has been an adversary of America at every chance he’s had — it’s unthinkable to me, it’s almost treasonous and it just make me ill to see some of these people do that,” Romney said.

“Standing up for freedom is the right thing to do in America. Anything less than that, in my opinion, is unworthy of American support,” the senator said.

Romney also criticized Trump’s now infamous 2019 phone call with Zelenskyy that led to his impeachment as a “very sad and awful” exchange on Trump’s part. Romney was the only Republican senator who voted to remove Trump from office in the first impeachment trial.

During the call, Zelenskyy told Trump that Ukraine was ready to buy more anti-tank missiles from the U.S. To which, Trump replied, “I would like you to do us a favor though because our country has been through a lot and Ukraine knows a lot about it,” referring to an investigation he wanted of then-Vice President Joe Biden, and his son, Hunter Biden.

“Without question, President Trump slow-walking the provision of weapons to Ukraine was an enormous error,” Romney said, adding as was the U.S. over the years not providing Ukraine with the military capabilities it needed to possibly dissuade Putin from attacking.

But, he said, given the passion, energy and leadership in Ukraine, “I wouldn’t count them out in being able to reject Russia’s aggression.”

The Russian government is a pariah, and the world is finally seeing Putin for what he really is: a small, evil, feral-eyed man. Nations and people around the world must continue to reject Russia's regime and fight for freedom. pic.twitter.com/nhpt3TgKVr

Romney said he’s concerned that past presidents, including George W. Bush, Barack Obama and Trump tried to reset relations with Russia hoping to see Putin as a responsible person. The late Arizona Sen. John McCain, he said, looked into Putin’s eyes and saw the KGB.

“That’s what we’re seeing. A small, evil, feral-eyed man who is trying to shape the world in the image where once again Russia would be an empire. And that’s not going to happen. The people of the world see him and see Russia for what it is,” he said.

Romney said the Biden administration has done some things well and some not so well in its response to Russia’s war on Ukraine. It was a mistake to continue the policy of prior administrations to not provide Ukraine with the defensive weapons it needs, he said. Biden, he said, has done well to share U.S. intelligence with its allies and to combine efforts to sanction Russia.

Sanctions will have an impact, Romney said, calling the White House decision to also go after Russian oligarchs good news. He said the U.S. and its allies should consider a no-fly zone in Ukraine to allow people to flee from Kyiv.

Let’s keep on cranking up the sanctions against what is an evil regime,” Romney said.

Romney said he hopes and believes Putin may recognize that he made a huge error, that he has badly miscalculated how hard the people of Ukraine would fight and the nature of the world’s response.