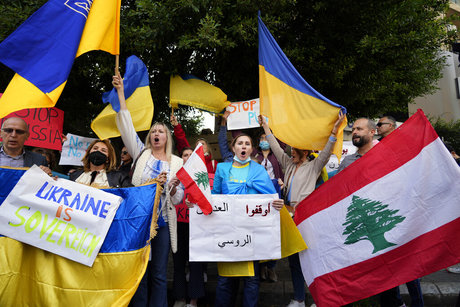 Lebanese nationals and Ukrainians who live in Lebanon hold placards and chant slogans during a protest against Moscow’s wide-ranging attack on their country, outside the Russian embassy in Beirut, Lebanon, Thursday, Feb. 24, 2022. The protest came hours after Russia launched an attack on Ukraine hitting cities and bases with airstrikes or shelling, as civilians piled into trains and cars to flee. (AP Photo/Bilal Hussein)
Share:

“Lebanon condemns the invasion of Ukrainian territory and calls on Russia to halt its military operation immediately and withdraw its forces… and return to dialogue and negotiations as a better means of finding a solution,” the ministry stated on Thursday.

However, during Friday’s cabinet session Hezbollah MP and Minister of Labour, Mustafa Bayram, said that the condemnation of Russia’s operations in Ukraine violates the principle of neutrality espoused by the Lebanese authorities and potentially exposes Lebanon to dangerous repercussions as a result.

Another Hezbollah MP  Ibrahim Al-Moussawi took to Twitter and criticised the government who “distance themselves and pretend to be neutral where they want, and they interfere and condemn where they want”, calling on Foreign Minister Abdallah Bou Habib to explain what Lebanon’s foreign policy is.

Another Hezbollah MP Hasan Fadlallah also stressed that the ministry’s statement neither reflects the position of the Lebanese people nor the state.

“Why didn’t they wait to discuss this issue at a cabinet session. We find out that many Lebanese sides started to disavow such stance and that the Council of Ministers knew nothing about this statement,” Fadlallah was quoted by Al-Manar.

“Such stances won’t please those whom they are trying to appease,” he added.

In response to ministry’s statement Russia’s embassy in Beirut announced that it was shocked by the announcement.

“The statement… surprised us by violating the policy of dissociation and by taking one side against another in these events, noting that Russia spared no effort in contributing to the advancement and stability of the Lebanese Republic,” a statement said.

But according to observers Hezbollah never adhered to Lebanon ‘s policy of dissociation, which addressed mainly the countries surrounding the country like Syria, Yemen, Iraq etc .

Russia never complained about Hezbollah’s involvement in Syria, iraq, Yemen and Arab Gulf countries but was quick to criticize Lebanon’s move concerning its invasion of its neighbor .

The invasion of Ukraine left Russia and its strongman , Vladimir Putin completely isolated