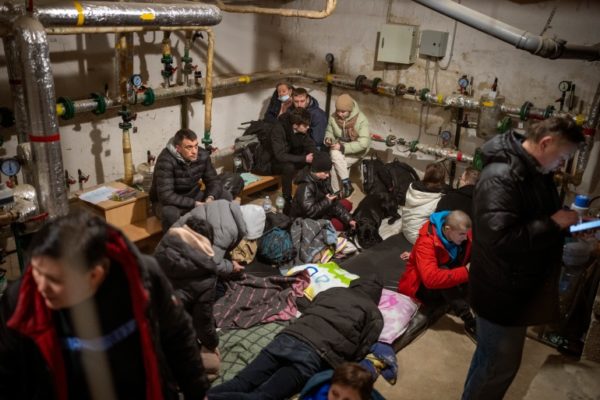 “Good morning, what’s the situation where you’re at? We slept underground and we heard sounds,” a Lebanese student in Ukraine tells him in a voice message, trying to hold back her tears. “We’re so exhausted. My body is shaking.”

A Lebanese university professor who has lived in Kyiv for 33 years, Chreim said thousands of his compatriots trapped in Ukraine are trying to leave, as Russian forces continue to bombard the country.

“We have Lebanese families with two or three-month-old babies who recently emigrated because of the economic crisis,” he said, referring to his country’s financial woes. “We’re trying to send them food.”

Chreim heads the Lebanese Community in Ukraine, a diaspora group in the country. He said there are some 4,500 Lebanese living in Ukraine, of whom about 1,300 are students.

Some are barely 20 years old.

Some students have posted videos on social media, appealing to the Lebanese government to help them evacuate.

Translation: Lebanese in Ukraine call on the “corner-shop state” to care for the Lebanese community.

Ukrainian President Volodymyr Zelenskyy said in a video address on Friday morning that 137 people, both civilians and military personnel, have been killed and hundreds more wounded since Russia launched its multi-pronged attack in the early hours of Thursday.

Lebanon’s foreign ministry said on Thursday it would form a crisis team composed of ministerial officials and the Lebanese ambassadors of Ukraine, Russia, Poland and Romania to “exchange information and propose next steps that need to be taken”.

The ministry also set up a signup form and hotline for Lebanese in Ukraine.

Lebanese trapped in Ukraine told Al Jazeera the country’s embassy has either not responded to their calls or said there was nothing they could do.

“Two weeks ago, the embassy told us word for word, ‘Your government is very poor now and can barely feed themselves, how do you expect anything from this government’,” said a medical student in Kyiv, who did not want to share her name, fearing reprisals.

The student lives with five other Lebanese students in the capital, all between the ages of 23 and 25.

Meanwhile, Hassan Fahs, a 20-year-old medical student in Chernivtsi, near the Romanian border, said his university has been speaking to Romanian authorities to see if they could evacuate their students.

Fahs said that while the situation was relatively calm in the western city, tensions were rising.

“Today I saw a gas station with a full line,” he said. “I even saw many people on bus stops with their bags, which never happens around here. Even most taxis were full,” he added. “I also tried contacting the Lebanese embassy in case of an emergency to register my name in there and all I got in the phone call was simply, ‘Please email us, goodbye’.”

He said his email has gone unanswered. His United States-based brother was able to get in touch with the embassy, and was told there is still no clear plan and advised Fahs to stay at home.

Lebanese officials at the foreign ministry and in the embassy in Kyiv did not respond to numerous inquiries from Al Jazeera. One designated spokesperson only shared the link to the signup form.

Chreim urged Lebanon’s government to act quickly, especially since there are Lebanese living in eastern parts of the country including Dnipro and Kharkiv. “They’re hiding in basements,” he said, shaken and angry.

He has been trying to secure food and transportation for them, and is outraged that the embassy is not doing that themselves. “They have a budget. Who is this money for?” Chreim said. “The embassy should call on all Lebanese to head to the embassy to be taken care of.”

For many, the professor has become something of Lebanon’s de facto ambassador to Ukraine – and he said he would not leave Kyiv.

“It’s getting scary here, but I can’t flee and leave all these people.”