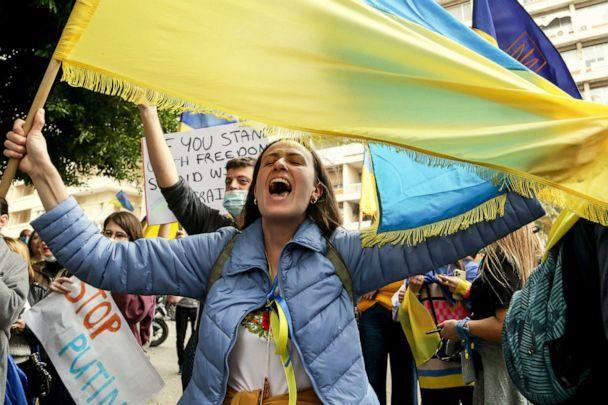 PHOTO: Ukrainian nationals chant slogans against Russian President Vladimir Putin during a demonstration outside the Russian embassy in Beirut to denounce the Russian military operation against Ukraine, on Feb. 24, 2022. (Marwan Naamani/Polaris)
Share:

By KIARA ALFONSECA and JILL TATARA

The streets of several major cities across the globe transformed into seas of blue and yellow Ukrainian flags on Thursday. Protesters are demanding action from their local leaders regarding the Russian invasion into Ukraine, which has already claimed dozens of lives.

In New York City, hundreds of protesters marched to and gathered at Times Square, the Russian Mission and United Nations buildings in support of Ukraine amid the Russian attacks.

The city is home to the largest Ukrainian community in the U.S., with more than 150,000 Ukrainians residing across the region.

In Washington, D.C., protesters marched to the White House, as well as to the Russian embassy, to demand action from President Joe Biden. According to Washington ABC affiliate WJLA, a demonstrator painted the word “murder” on the sidewalk in front of the embassy building.

In London, hundreds of protesters gathered outside Prime Minister Boris Johnson’s office and the Russian Embassy carrying Ukrainian flags. Russians, Ukrainians and other protesters joined together in calls against the military invasion.

Berlin’s most famous landmark, The Brandenburg Gate, was lit in the yellow and blue colors of Ukraine in support of the country under siege. Thousands also marched through the city’s streets in support of Ukrainians.

In Paris, the City Hall was also lit up in support of Ukraine. Marches also took place throughout the city.

In Moscow, anti-war protesters spoke out against their own country, as Russian military forces continued to lay siege to their neighboring country. More than a thousand protesters were arrested in a sign of the totalitarian nature of Russia’s government. Protests also broke out in Saint Petersburg.