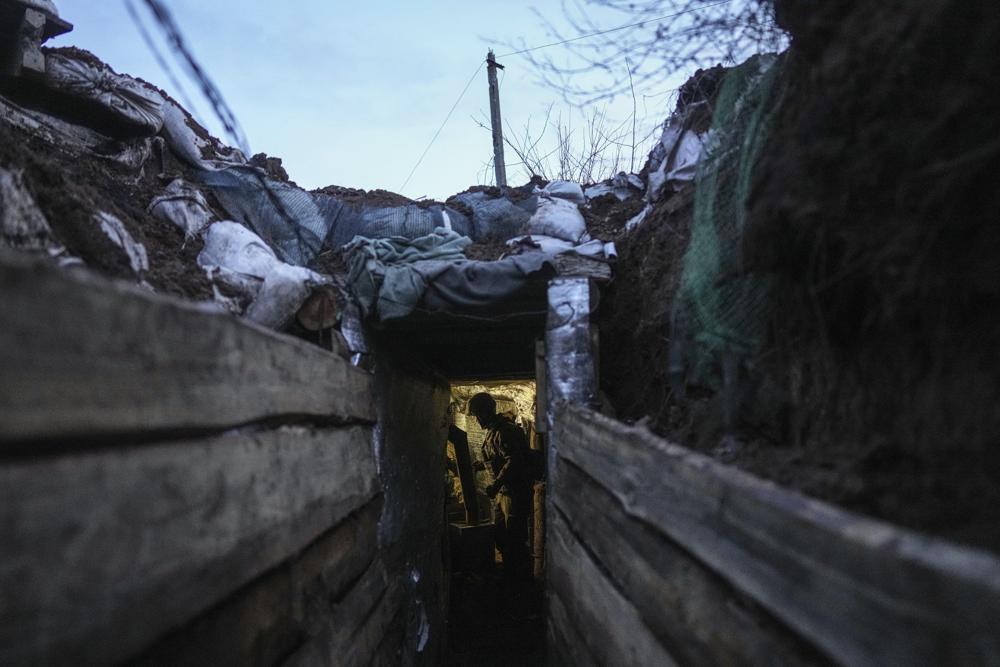 A Ukrainian serviceman stands in a shelter on a position at the line of separation between Ukraine-held territory and rebel-held territory near Zolote, Ukraine, Saturday, Feb. 19, 2022. Ukrainian President Volodymyr Zelenskyy, facing a sharp spike in violence in and around territory held by Russia-backed rebels and increasingly dire warnings that Russia plans to invade, has called for Russian President Vladimir Putin to meet him and seek a resolution to the crisis. (AP Photo/Evgeniy Maloletka)
Share:

By LORI HINNANT and JIM HEINTZ

KYIV, Ukraine (AP) — Russia extended military drills near Ukraine’s northern borders Sunday amid increased fears that two days of sustained shelling along the contact line between soldiers and Russa-backed separatists in eastern Ukraine could spark an invasion. Ukraine’s president appealed for a cease-fire.

The exercises were originally set to end Sunday and brought a sizable contingent of Russian forces to Belarus. The presence of the Russian troops raised concern that they could be used to sweep down on the Ukrainian capital, Kyiv, a city of about 3 million people less than a three-hour drive away.

Western leaders warned that Russia was poised to attack its neighbor, which is surrounded on three sides by about 150,000 Russian soldiers, warplanes and equipment. Russia held nuclear drills Saturday as well as the conventional exercises in Belarus, and has ongoing naval drills off the coast in the Black Sea.

The United States and many European countries have alleged for months that Russia is trying to create pretexts to invade. They have threatened massive, immediate sanctions if it does.

“ We’re talking about the potential for war in Europe,” U.S. Vice President Kamala Harris said Sunday at a security conference in Munich, Germany. “It’s been over 70 years, and through those 70 years … there has been peace and security.”

“We cannot forever offer an olive branch while Russia conducts missile tests and continues to amass troops,” said Michel, the president of the European Council.

Ukrainian President Volodymyr Zelenskyy called Saturday on Russian President Vladimir Putin to choose a place where the two leaders could meet to try to resolve the crisis and on Sunday appealed for a cease-fire on Twitter. Russia has denied plans to invade, but the Kremlin had not responded to Zelenskyy’s offer to meet by Sunday, and it was Belarus — not Russia — that announced the extension of the drills.

NATO has estimated there are 30,000 Russian troops in Belarus.

After a call with French President Emmanuel Macron, Putin blamed Ukraine for the escalation at the contact line and NATO for “pumping modern weapons and ammunition” into Ukraine. The Kremlin statement mentioned a cease-fire only in passing and made no mention of Zelenskyy’s call for a meeting.

In Kyiv, life continued seemingly as usual on Sunday, with brunches and church services in full swing. Katerina Spanchak, who fled the separatist-occupied Lugansk region years ago, said she prayed for peace.

“We are people, we all love life, and we are all united by our love of life. We should appreciate it every day. That’s why I think everything will be fine,” Spanchak said outside services at St. Michael’s monastery.

But in Lugansk, the area of eastern Ukraine where her parents still live, and neighboring Donetsk, separatist leaders ordered a full military mobilization and sent more civilians to Russia, which has issued about 700,000 passports to residents of the rebel-held territories. Claims that Russian citizens are being endangered might be used as justification for military action.

Officials in the separatist territories claimed Ukrainian forces launched several artillery attacks over the past day and that two civilians were killed during an unsuccessful assault on a village near the Russian border. Ukraine’s military said two soldiers died in firing from the separatist side on Saturday.

Ukraine’s leader criticized the U.S. and other Western nations for holding back on new sanctions for Russia. Zelenskyy, in comments before the conference, also questioned the West’s refusal to allow Ukraine to join NATO immediately. Putin has demanded that NATO reject Ukraine as a member.

U.S. President Joe Biden said late Friday that based on the latest American intelligence, he was now “convinced” that Putin has decided to invade Ukraine in coming days and assault the capital. Biden was to meet with his national security team later Sunday in Washington.

A U.S. military official said an estimated 40% to 50% of the ground forces surrounding Ukraine had moved into attack positions closer to the border. The official, who spoke on condition of anonymity to discuss internal U.S. assessments, said the change had been underway for about a week and did not necessarily mean Putin was committed to an invasion.

Lines of communication between Moscow and the West remain open: Macron spoke with Putin on Sunday for nearly two hours before a 30-minute call with the Ukrainian president. U.S. Secretary of State Antony Blinken and Russian Foreign Minister Sergey Lavrov agreed to meet next week.

Blinken said Sunday the U.S. was still working every lever possible to try to dissuade Putin from invading Ukraine but said recent events, including the extension of the troops in Belarus and the increase in shelling along the contact line, showed Putin well underway in laying the pretexts and groundwork for invasion, in line with findings of U.S. intelligence and previous Russian territorial grabs. “He is following the script almost to the letter,” Blinken told CNN.

“Up to the last minute, there is still an option for him to pull back,” Blinken told NBC’s Meet the Press. He said his offer to meet Lavrov in Europe in the coming days was conditioned on Russia not rolling into Ukraine beforehand.

Macron’s office said both the Ukrainian and Russian leaders had agreed to work toward a diplomatic solution “in coming days and coming weeks.”

Immediate worries focused on eastern Ukraine, where Ukrainian forces have been fighting the pro-Russia rebels since 2014 in a conflict that has killed some 14,000 people.

Ukraine and the separatist leaders traded accusations of escalation. Russia on Saturday said at least two shells fired from a government-held part of eastern Ukraine landed across the border, but Ukraine’s foreign minister dismissed that claim as “a fake statement.”

“When tension is escalated to the maximum, as it is now, for example, on the line of contact, then any spark, any unplanned incident or any minor planned provocation can lead to irreparable consequences,” Putin’ spokesman Dmitry Peskov said in an interview that aired Sunday on Russian state television.

On the front lines, Ukrainian soldiers said they were under orders not to return fire. Zahar Leshushun, peering into the distance with a periscope, had followed the news all day from a trench where he is posted near the town of Zolote.

“Right now, we don’t respond to their fire because …” the soldier said before being interrupted by the sound of an incoming shell. “Oh! They are shooting at us now. They are aiming at the command post.”

Sporadic violence has broken out for years along the line separating Ukrainian forces from the Russia-backed separatists, but the spike in recent days is orders of magnitude higher than anything recently recorded by international monitors: nearly 1,500 explosions in 24 hours.

Denis Pushilin, the head of the pro-Russia separatist government in Ukraine’s Donetsk region, cited an “immediate threat of aggression” from Ukrainian forces in his announcement of a call to arms. Ukrainian officials vehemently denied having plans to take rebel-controlled areas by force.

A similar statement followed from his counterpart in the Luhansk region. On Friday, the rebels began evacuating civilians to Russia with an announcement that appeared to be part of efforts to paint Ukraine as the aggressor.

Metadata from two videos posted by the separatists announcing the evacuations showed the files were created two days ago, the AP confirmed. U.S. authorities have alleged the Kremlin’s effort to come up with an invasion pretext could include staged, prerecorded videos.