Ukraine’s Russian speakers worry about being ‘saved’ by Putin 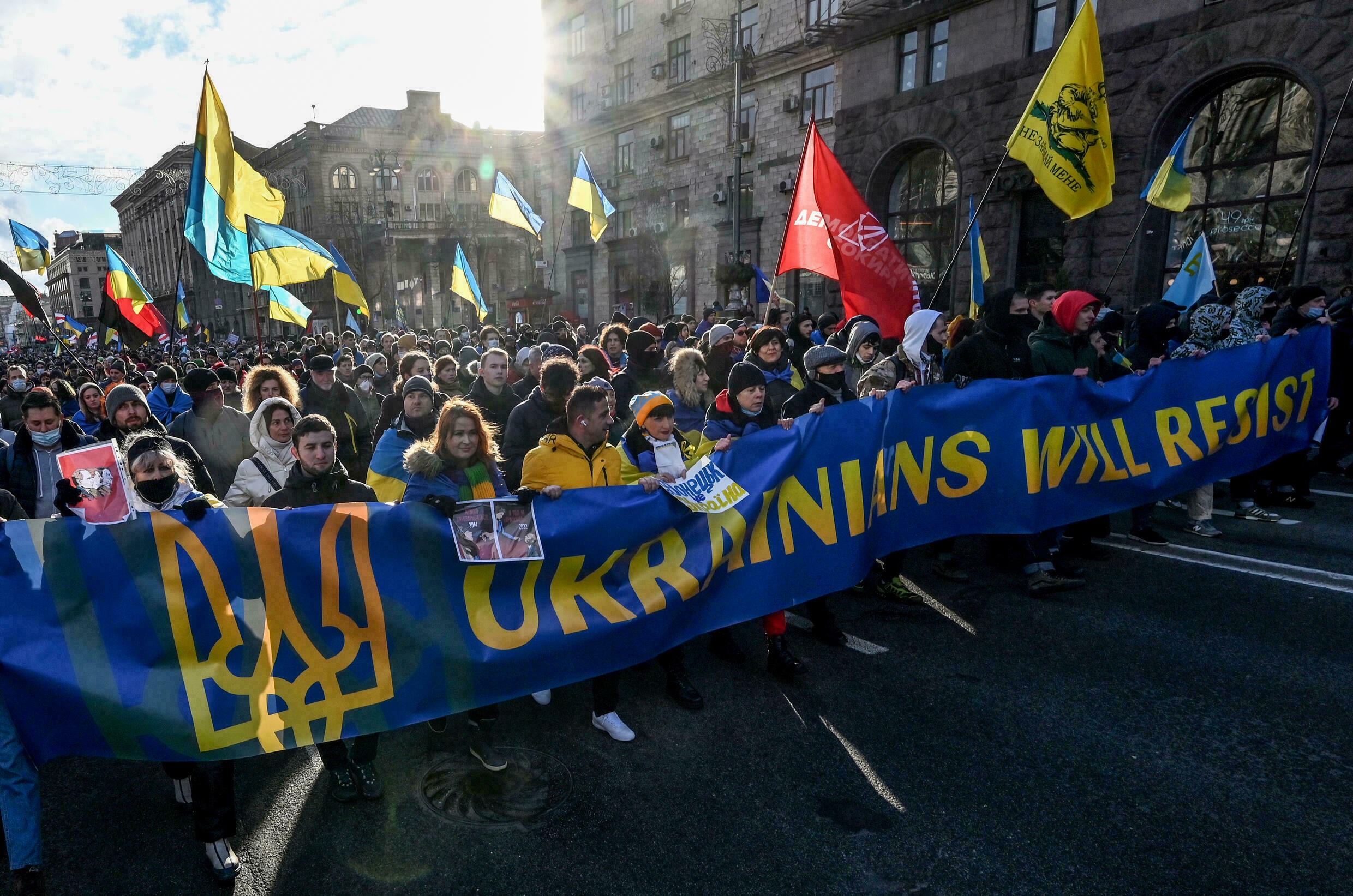 Ukrainians have responded to Russia’s war games by defiantly marching through the streets of Kyiv Sergei SUPINSKY AFP
Share:

Kyiv (AFP) – Kyiv driving instructor Andriy Atamanyuk does not want to be saved by Vladimir Putin despite the Kremlin chief’s pledge to fight “discrimination” against Russian speakers in Ukraine.

“Never,” the 48-year-old Ukrainian said in Russian. “There is no-one to save here. There is no discrimination. It is utter nonsense.”

The treatment of ethnic Russians — many of them living in Ukraine’s industrial southeast — has been an obsession for Putin ever since a pro-EU revolution pulled Kyiv out of Moscow’s orbit in 2014.

But the issue has gained added attention as Putin tries to reverse NATO’s post-Soviet expansion, sending more than 150,000 troops to Russia’s border with Ukraine.

Analysts and some Western governments fear that Putin may use language and the perceived mistreatment of ethnic Russians as a pretext for launching an all-out war on Ukraine.

“These fairy tales about the language are just an excuse to invade,” he said. “There is nothing for Putin to see here.”

The collapse of the USSR two years later created economic mayhem on a scale so sweeping that politically sensitive issues such as language became trivial by comparison and were put aside.

But the Kremlin’s March 2014 annexation of Crimea and the Moscow-backed revolt in Ukraine’s east that broke out around the same time stirred up patriotic passions and reopened old fault lines.

The Western-backed government in Kyiv began to unroll legislation designed to promote Ukrainian on television and in the streets.

And the Kremlin started to grumble about the alleged persecution of ethnic Russians by a Kyiv administration that it casts, by turns, as a puppet of the US government and an offshoot of neo-Nazis.

Russians “are not being recognised as indigenous people on what is effectively their native land”, Putin fumed earlier this month.

The law particularly upsets Putin because it makes an exception for English-language media in Ukraine.

But the New York-based rights group also stressed that the “Ukrainian government has every right to promote its state language and strengthen its national identity”.

Finding the difficult balance of doing this without provoking Putin has been something IT entrepreneur and philanthropist Yevgeniy Utkin has been mulling over for some time.

Utkin says he speaks Russian “out of principle, because I love it very much”.

But this has not held him back from serving as an adviser for the Ukrainian government or appearing on political talk shows.

“I have never — not once — had a single incident related to me speaking Russian,” Utkin said.

Yet he worries that any attempts to strengthen the Ukrainian language will be seized upon by Putin and provide added ammunition for the Kremlin media’s unrelenting attacks on Kyiv.

“Language is simply another bullet in Russia’s hybrid war,” said Utkin. “There is an information war being waged in our heads.”

The Kremlin’s current standoff with the West escalated a few months after Putin penned a 7,000-word essay last July entitled “On the historical unity of Russians and Ukrainians”.

“The formation of an ethnically pure Ukrainian state, aggressive towards Russia, is comparable in its consequences to the use of weapons of mass destruction against us,” Putin said in the English version of the text.

The article was widely interpreted as Putin’s defining argument for stripping Ukraine of its independence and subjecting it to Kremlin rule.

It has also been picked apart by historians as wildly inaccurate.

“Russian propaganda depends upon myths and counterfactuals, all spun in the direction of Russian greatness and innocence,” Yale historian and author Timothy Snyder wrote.

Many leading thinkers in Ukraine believe that the two countries have drifted too far apart to be rejoined by force.

“Freedom is now in Ukrainians’ DNA. And the problem is that the Russian elite does not understand this,” said Utkin.

Russians subscribe to a “collective mentality”, he told AFP. “Ukrainians are individuals.”