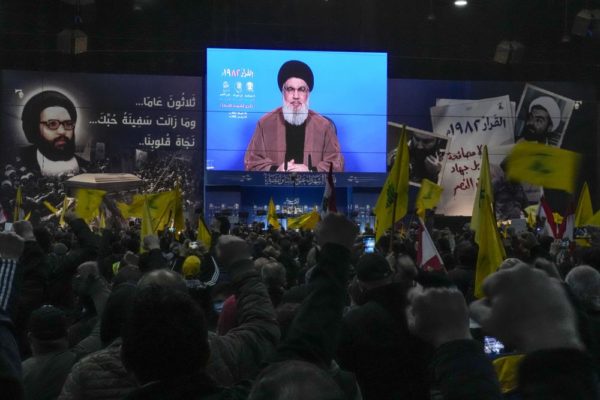 Hezbollah leader Hassan Nasrallah speaks via a video link as his supporters raise their hands, during an annual ceremony commemorating the killing of some of the Iran-backed group’s top political and military leaders, in the southern suburb of Beirut, Lebanon, Wednesday, Feb. 16, 2022. Nasrallah revealed Wednesday in a televised speech that his militant faction has been manufacturing military drones in Lebanon and has the technology to turn thousands of missiles in their possession into precision-guided munitions. (AP Photo/Hassan Ammar)
Share:

BEIRUT (AP) — The leader of Lebanon’s Hezbollah revealed Wednesday that his militant group has been manufacturing military drones in Lebanon and has the technology to turn thousands of missiles in their possession into precision-guided munitions.

Hassan Nasrallah said Hezbollah has been working on improving its military capabilities, revealing that last summer, Hezbollah fighters conducted the largest training exercise since the group was formed in 1982.

Nasrallah’s comments came in a televised speech during an annual ceremony marking the anniversary of the killing of some of the Iran-backed group’s top political and military leaders.

He added: “We have started manufacturing drones in Lebanon a long time ago. Those who want to buy can fill out an application.”

Hezbollah has sent drones in the past over Israel, and some of them were shot down.

Iran unveiled a kit to convert artillery rockets into guided missiles on October 7, 2019

Hezbollah, which fought a monthlong inconclusive war with Israel in 2006, has been fighting on the side of Syrian President Bashar Assad’s forces in that country’s decade-old civil war.

Israel has staged hundreds of strikes on targets inside government-controlled Syria, which borders Lebanon, over the years. But it rarely acknowledges or discusses such operations. Israeli officials have acknowledged, however, that the Israeli military is targeting bases of Iran-allied militias, such as Hezbollah. Israel says it is going after posts and arms shipments believed to be bound for the groups.

Israel says Iranian presence on its northern frontier is a red line, justifying its strikes on facilities and weapons inside Syria.

Rocket Vs. Missile: What’s The Difference?

According to Google (who got their definition from Oxford), a rocket is “a cylindrical projectile that can be propelled to a great height or distance by the combustion of its contents, used typically as a firework or signal.”

Google claims that a missile is “an object which is forcibly propelled at a target, either by hand or from a mechanical weapon.”

The Difference Is Purpose

Based on all of this information, the difference between a rocket and a missile can be summarised in one word “purpose”.

A rocket can serve many purposes. Whilst you could use a rocket to cause damage (missile), you could also use it to get into space (Space rocket), or you could use it to create a beautiful display (Fireworks).

A missile however can only be used for hitting things. A firework is not usually a missile, but if you aim it at something, it can become a missile.

A rock can be a missile if it serves the purpose of hitting something. But it can never be a rocket before it doesn’t power itself, it needs to be thrown.