ISIS leader killed in US raid in Syria: Biden 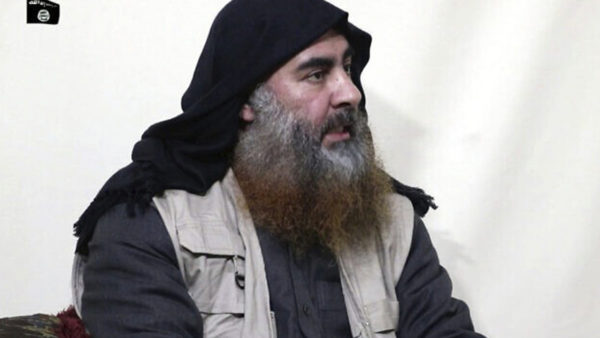 ISIS leader Abu Ibrahim al-Hashimi al-Qurayshi killed himself and members of his family by triggering an explosive device during a counter-terrorism raid by the US’ Joint Special Operations Command on Feb. 3, 2022
Share:

President Biden said he would have more to say later Thursday morning.

President Joe Biden said Thursday that a U.S. raid in Syria killed the leader of ISIS.

“Last night at my direction, U.S. military forces in northwest Syria successfully undertook a counterterrorism operation to protect the American people and our Allies, and make the world a safer place,” he said in a statement. “Thanks to the skill and bravery of our Armed Forces, we have taken off the battlefield Abu Ibrahim al-Hashimi al-Qurayshi—the leader of ISIS. All Americans have returned safely from the operation. I will deliver remarks to the American people later this morning. May God protect our troops.”

The White House tweeted a photo it said showed Biden and Vice President Kamala Harris in the Situation Room watching as the raid took place.

Earlier, the Pentagon has confirmed U.S. special operations forces carried out a what it called a “successful” counterterrorism mission in northwest Syria Wednesday, but provided few other details.

“U.S. Special Operations forces under the control of U.S. Central Command conducted a counterterrorism mission this evening in northwest Syria. The mission was successful. There were no U.S. casualties,” said John Kirby, the Pentagon press secretary, in a statement. “More information will be provided as it becomes available.”

One of the helicopters used in the mission experienced a mechanical problem and then had to be blown up on the ground by U.S. forces, according to a U.S. official.

No details were provided on whether it involved ground troops and helicopters as was claimed in a flurry of social media reports emerging from Syria on Wednesday night.

The AP reported 13 people were killed.

ABC Senior White House Correspondent Mary Bruce reported that a source familiar with the situation said any reported civilian casualties resulted from the target or a family member detonating an explosive device at the beginning of the operation, not from U.S. forces.

The social media posts reported possible U.S. military activity in Idlib province, a town in far western Syria, close to the border with Turkey. Some posts included videos that seemed to show night scenes where the sounds of gunfire and low-flying helicopters could be heard near the towns of Atimah and Dar Ballout.

The approximately 1,000 U.S. military troops in Syria operate in eastern Syria supporting the mission against ISIS.

American troops do not operate in government-controlled areas in northwestern Syria, especially in Idlib province, which was an extremist safe haven for much of the last decade. But they have sporadically carried out counterterrorism missions in Idlib, targeting various Islamic extremist groups with drone strikes.

The highest profile mission was a ground raid that killed ISIS’ top leader, Abu Bakr al Baghdadi, who was hiding out in a house close to the border with Turkey, on Oct. 27, 2019.

Who is Abu Ibrahim al-Hashimi al-Qurayshi

Abu Ibrahim al-Hashimi al-Qurashi Arabic: born Amir Mohammed Abdul Rahman al-Mawli al-Salbi; October 1976 – February 3, 2022) was an Iraqi Islamist and the second leader of the Islamic State. His appointment by a shura council was announced by the Islamic State media on 31 October 2019, less than a week after the death of previous leader Abu Bakr al-Baghdadi.

The U.S. Rewards for Justice Program was offering up to $10 million in exchange for information leading to al-Qurashi’s apprehension . On February 3, 2022, he reportedly killed himself and members of his family by triggering an explosive device during a counter-terrorism raid by the US’ Joint Special Operations Command.